Economists construct different production functions depending on the focus of their studies. [link] presents two examples of aggregate production functions. In the first production function, shown in [link] (a), the output is GDP. The inputs in this example are workforce, human capital, physical capital, and technology. We discuss these inputs further in the module, Components of Economic Growth. 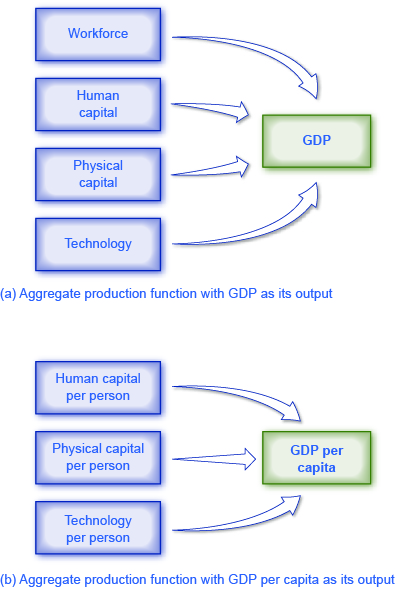 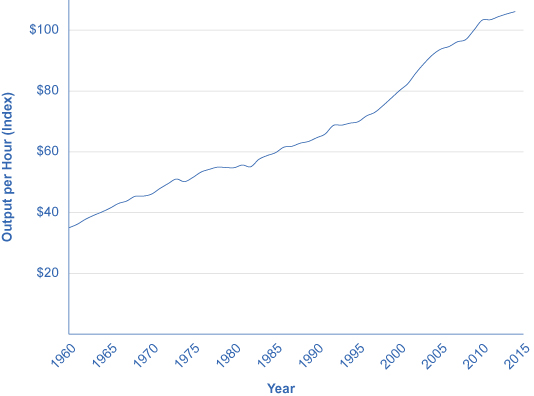 Output per Hour Worked in the U.S. Economy, 1947–2011 Output per hour worked is a measure of worker productivity. In the U.S. economy, worker productivity rose more quickly in the 1960s and the mid-1990s compared with the 1970s and 1980s. However, these growth-rate differences are only a few percentage points per year. Look carefully to see them in the changing slope of the line. The average U.S. worker produced over twice as much per hour in 2014 than he did in the early 1970s. (Source: U.S. Department of Labor, Bureau of Labor Statistics.)

A common measure of U.S. productivity per worker is dollar value per hour the worker contributes to the employer’s output. This measure excludes government workers, because their output is not sold in the market and so their productivity is hard to measure. It also excludes farming, which accounts for only a relatively small share of the U.S. economy. [link] shows an index of output per hour, with 2009 as the base year (when the index equals 100). The index equaled about 106 in 2014. In 1972, the index equaled 50, which shows that workers have more than doubled their productivity since then. 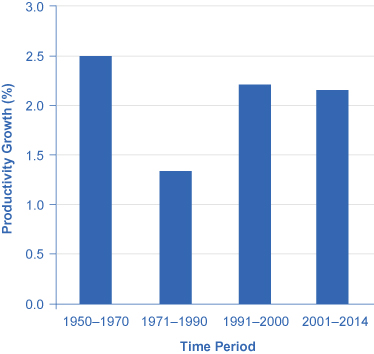 In recent years a controversy has been brewing among economists about the resurgence of U.S. productivity in the second half of the 1990s. One school of thought argues that the United States had developed a “new economy” based on the extraordinary advances in communications and information technology of the 1990s. The most optimistic proponents argue that it would generate higher average productivity growth for decades to come. The pessimists, on the other hand, argue that even five or ten years of stronger productivity growth does not prove that higher productivity will last for the long term. It is hard to infer anything about long-term productivity trends during the later part of the 2000s, because the steep recession of 2008–2009, with its sharp but not completely synchronized declines in output and employment, complicates any interpretation. While productivity growth was high in 2009 and 2010 (around 3%), it has slowed down since then.

Comparing the Economies of Two Countries

The Organization for Economic Co-operation and Development (OECD) tracks data on the annual growth rate of real GDP per hour worked. You can find these data on the OECD data webpage “Labour productivity growth in the total economy” at this website.

Step 1. Visit the OECD website given above and select two countries to compare.

Step 2. On the drop-down menu “Variable,” select “Real GDP, Annual Growth, in percent” and record the data for the countries you have chosen for the five most recent years.

Step 3. Go back to the drop-down menu and select “Real GDP per Hour Worked, Annual Growth Rate, in percent” and select data for the same years for which you selected GDP data.

Step 4. Compare real GDP growth for both countries. [link] provides an example of a comparison between Australia and Belgium.

Step 5. Consider the many factors can affect growth. For example, one factor that may have affected Australia is its isolation from Europe, which may have insulated the country from the effects of the global recession. In Belgium’s case, the global recession seems to have had an impact on both GDP and real GDP per hours worked between 2009 and 2013, though productivity does seem to be recovering.

The Power of Sustained Economic Growth

Nothing is more important for people’s standard of living than sustained economic growth. Even small changes in the rate of growth, when sustained and compounded over long periods of time, make an enormous difference in the standard of living. Consider [link], in which the rows of the table show several different rates of growth in GDP per capita and the columns show different periods of time. Assume for simplicity that an economy starts with a GDP per capita of 100. The table then applies the following formula to calculate what GDP will be at the given growth rate in the future:

The slowest rate of GDP per capita growth in the table, just 1% per year, is similar to what the United States experienced during its weakest years of productivity growth. The second highest rate, 3% per year, is close to what the U.S. economy experienced during the strong economy of the late 1990s and into the 2000s. Higher rates of per capita growth, such as 5% or 8% per year, represent the experience of rapid growth in economies like Japan, Korea, and China.

[link] shows that even a few percentage points of difference in economic growth rates will have a profound effect if sustained and compounded over time. For example, an economy growing at a 1% annual rate over 50 years will see its GDP per capita rise by a total of 64%, from 100 to 164 in this example. However, a country growing at a 5% annual rate will see (almost) the same amount of growth—from 100 to 163—over just 10 years. Rapid rates of economic growth can bring profound transformation. (See the following Clear It Up feature on the relationship between compound growth rates and compound interest rates.) If the rate of growth is 8%, young adults starting at age 20 will see the average standard of living in their country more than double by the time they reach age 30, and grow nearly sevenfold by the time they reach age 45.

How are compound growth rates and compound interest rates related?

The formula for growth rates of GDP over different periods of time, as shown in [link], is exactly the same as the formula for how a given amount of financial savings grows at a certain interest rate over time, as presented in Choice in a World of Scarcity. Both formulas have the same ingredients:

Recall that compound interest is interest that is earned on past interest. It causes the total amount of financial savings to grow dramatically over time. Similarly, compound rates of economic growth, or the compound growth rate, means that the rate of growth is being multiplied by a base that includes past GDP growth, with dramatic effects over time.

For example, in 2013, the World Fact Book, produced by the Central Intelligence Agency, reported that South Korea had a GDP of 💲1.67 trillion with a growth rate of 2.8%. We can estimate that at that growth rate, South Korea’s GDP will be 💲1.92 trillion in five years. If we apply the growth rate to each year’s ending GDP for the next five years, we will calculate that at the end of year one, GDP is 💲1.72 trillion. In year two, we start with the end-of-year one value of 💲1.67 and increase it by 2%. Year three starts with the end-of-year two GDP, and we increase it by 2% and so on, as depicted in the [link].

Another way to calculate the growth rate is to apply the following formula:

Where “future value” is the value of GDP five years hence, “present value” is the starting GDP amount of 💲1.64 trillion, “g” is the growth rate of 2%, and “n” is the number of periods for which we are calculating growth.

Productivity, the value of what is produced per worker, or per hour worked, can be measured as the level of GDP per worker or GDP per hour. The United States experienced a productivity slowdown between 1973 and 1989. Since then, U.S. productivity has rebounded (the current global recession notwithstanding). It is not clear whether the current growth in productivity will be sustained. The rate of productivity growth is the primary determinant of an economy’s rate of long-term economic growth and higher wages. Over decades and generations, seemingly small differences of a few percentage points in the annual rate of economic growth make an enormous difference in GDP per capita. An aggregate production function specifies how certain inputs in the economy, like human capital, physical capital, and technology, lead to the output measured as GDP per capita.

Compound interest and compound growth rates behave in the same way as productivity rates. Seemingly small changes in percentage points can have big impacts on income over time.

Are there other ways in which we can measure productivity besides the amount produced per hour of work?

How is GDP per capita calculated differently from labor productivity?

How do gains in labor productivity lead to gains in GDP per capita?

Labor Productivity and Economic Growth outlined the logic of how increased productivity is associated with increased wages. Detail a situation where this is not the case and explain why it is not.

Refer back to the
Work It Out about Comparing the Economies of Two Countries and examine the data for the two countries you chose. How are they similar? How are they different?

aggregate production function
the process whereby an economy as a whole turns economic inputs such as human capital, physical capital, and technology into output measured as GDP per capita

human capital
the accumulated skills and education of workers

labor productivity
the value of what is produced per worker, or per hour worked (sometimes called worker productivity)

production function
the process whereby a firm turns economic inputs like labor, machinery, and raw materials into outputs like goods and services used by consumers

technological change
a combination of invention—advances in knowledge—and innovation