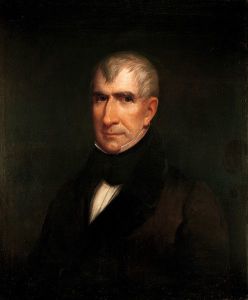 William Henry Harrison was the ninth President of the United States. He’s also recognized for giving the worst State of the Union address—ever. His two-hour speech delivered in a snowstorm in 1841 proves that a long speech can kill (and not in the colloquial “it was so good” sense). Perhaps it was karma, but after the President gave his meandering speech discussing ancient Roman history more than campaign issues, he died from a cold caught while blathering on standing outside without a hat or coat.[1]

Now, when asked what you know about Abraham Lincoln, you’re likely to have more answers to offer. Let’s focus on his Gettysburg Address. The speech is a model of brevity. His “of the people, by the people, for the people” is always employed as an example of parallelism, and he kept his words simple. In short, Lincoln considered his listening audience when writing his speech.

The habit of common and continuous speech is a symptom of mental deficiency. It proceeds from not knowing what is going on in other people’s minds. ~ Walter Bagehot

When you sit down to compose a speech, keep in mind that you are writing for the ear rather than the eye. Listeners cannot go back and reread what you have just said. They need to grasp your message in the amount of time it takes you to speak the words. To help them accomplish this, you need to give listeners a clear idea of your overarching aim, reasons to care, and cues about what is important. You need to inspire them to want to not just hear but engage in what you are saying.

Humans are motivated by ego; they always want to know “what’s in it for me?” So, when you want to want to get an audience’s attention, it is imperative to establish a reason for your listeners to care about what you are saying.

Some might say Oprah did this by giving away cars at the end of an episode. But, that only explains why people waited in line for hours to get a chance to sit in the audience as her shows were taped. As long as they were in the stands, they didn’t need to listen to get the car at the end of the show. Yet Oprah had audiences listening to her for 25 years before she launched her own network. She made listeners care about what she was saying. She told them what was in that episode for them. She made her audience members feel like she was talking to them about their problems, and offering solutions that they could use—even if they weren’t multibillionaires known worldwide by first name alone.

Audiences are also more responsive when you find a means to tap their intrinsic motivation, by appealing to curiosity, challenging them, or providing contextualization.[2] You might appeal to the audience’s curiosity if you are giving an informative speech about a topic they might not be familiar with already. Even in a narrative speech, you can touch on curiosity by cueing the audience to the significant thing they will learn about you or your topic from the story. A speech can present a challenge too. Persuasive speeches challenge the audience to think in a new way. Special Occasion speeches might challenge the listeners to reflect or prompt action. Providing a listener with contextualization comes back to the what’s in it for me motivation. A student giving an informative speech about the steps in creating a mosaic could simply offer a step-by-step outline of the process, or she can frame it by saying to her listener, “by the end of my speech, you’ll have all the tools you need to make a mosaic on your own.” This promise prompts the audience to sit further forward in their seats for what might otherwise be a dry how-to recitation. 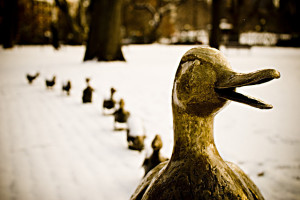 Audiences also lean in further when you employ active voice. We do this in speaking without hesitation. Imagine you were walking across campus and saw the contents of someone’s room dumped out on the lawn in front of your dorm. You’d probably tell a friend: “The contents of Jane’s room were thrown out the window by Julie.” Wait, that doesn’t sound right. You’re more likely to say: “Julie threw Jane’s stuff out the window!” The latter is an example of active voice. You put the actor (Julie) and the action (throwing Jane’s stuff) at the beginning. When we try to speak formally, we can fall into passive voice. Yet, it sounds stuffy, and so unfamiliar to your listener’s ear that he will struggle to process the point while you’ve already moved on to the next thing you wanted to say.

Twice and thrice over, as they say, good is it to repeat and review what is good. ~ Plato

If you don’t want to repeat things so often you remind your listener of a sound clip on endless loop, you can also cue your listener through vocal emphasis. Volume is a tool speakers can employ to gain attention. Certainly parents use it all of the time. Yet, you probably don’t want to spend your entire speech shouting at your audience. Instead, you can modulate your voice so that you say something important slightly louder. Or, you say something more softly, although still audible, before echoing it again with greater volume to emphasize the repetition. Changing your pitch or volume can help secure audience attention for a longer period of time, as we welcome the variety.

Pace is another speaker’s friend. This is not to be confused with the moving back and forth throughout a speech that someone might do nervously (inadvertently inducing motion sickness in his audience). Instead it refers to planning to pause after an important point or question to allow your audience the opportunity to think about what you have just said. Or, you might speak more quickly (although still clearly) to emphasize your fear or build humor in a long list of concerns while sharing an anecdote. Alternately, you could slow down for more solemn topics or to emphasize the words in a critical statement. For instance, a persuasive speaker lobbying for an audience to stop cutting down trees in her neighborhood might say, “this can’t continue. It’s up to you to do something.” But imagine her saying these words with attention paid to pacing and each period representing a pause. She could instead say, “This. Can’t. Continue. It’s up to you. Do something.”

Convince Them to Engage

Listeners respond to people. Consider this introduction to a speech about a passion for college football: 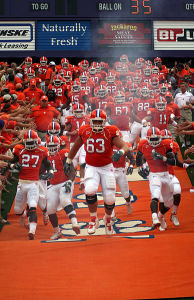 Now, compare it to this introduction to another speech about the same passion:

When I was a little boy, starting as early as four, my father would wake me up on Fall Saturdays with the same three words: “It’s Game Day!” My dad was a big Clemson Tigers fan, so we might drive to Death Valley to see a game. Everyone would come: my mom, my grandparents, and friends who went to Clemson too. We would all tailgate before the game—playing corn hole, tossing a foam football, and watching the satellite TV. Even though we loved Clemson football best, all college football was worth watching. You never knew when there would be an upset. You could count on seeing pre-professional athletes performing amazing feats. But, best of all, it was a way to bond with my family, and later my friends.

Both introductions set up the topic and even give an idea of how the speech will be organized. Yet, the second one is made more interesting by the human element. The speech is personalized.

The college football enthusiast speaker might continue to make the speech interesting to his listeners by appealing to commonalities. He might acknowledge that not everyone in his class is a Clemson fan, but all of them can agree that their school’s football team is fun to watch. Connecting with the audience through referencing things the speaker has in common with the listeners can function as an appeal to ethos. The speaker is credible to the audience because he is like them. Or, it can work as an appeal to pathos. A speaker might employ this emotional appeal in a persuasive speech about Habitat for Humanity by asking her audience to think first about the comforts of home or dorm living that they all take for granted.

If you engage people on a vital, important level, they will respond. ~ Edward Bond

In speaking to the audience about the comforts of dorm living, the speaker is unlikely to refer to the “dormitories where we each reside.” More likely, she might say, “the dorms we live in.” As with electing to use active voice, speakers can choose to be more conversational than they might be in writing an essay on the same topic.

The speaker might use contractions, or colloquialisms, or make comparisons to popular television shows, music, or movies. This will help the listeners feel like the speaker is in conversation with them—admittedly a one-sided one—rather than talking at them. It can be off-putting to feel the speaker is simply reciting facts and figures and rushing to get through to the end of their speech, whereas listeners respond to someone talking to them calmly and confidently. Being conversational can help to convey this attitude even when on the inside the speaker is far from calm or confident. Nevertheless, employ this strategy with caution. Being too colloquial, for instance using “Dude” throughout the speech, could undermine your credibility. Or a popular culture example that you think is going to be widely recognized might not be the common knowledge you think it is, and could confuse audiences with non-native listeners.

Choice of attention—to pay attention to this and ignore that—is to the inner life what choice of action is to the outer. In both cases, a man is responsible for his choice and must accept the consequences, whatever they may be. ~ W. H. Auden