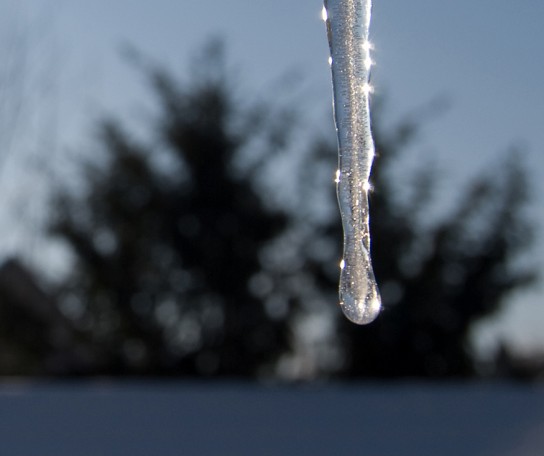 Figure 1. Heat from the air transfers to the ice causing it to melt. (credit: Mike Brand)

Energy is required to melt a solid because the cohesive bonds between the molecules in the solid must be broken apart such that, in the liquid, the molecules can move around at comparable kinetic energies; thus, there is no rise in temperature. Similarly, energy is needed to vaporize a liquid, because molecules in a liquid interact with each other via attractive forces. There is no temperature change until a phase change is complete. The temperature of a cup of soda initially at 0ºC stays at 0ºC until all the ice has melted. Conversely, energy is released during freezing and condensation, usually in the form of thermal energy. Work is done by cohesive forces when molecules are brought together. The corresponding energy must be given off (dissipated) to allow them to stay together Figure 2. 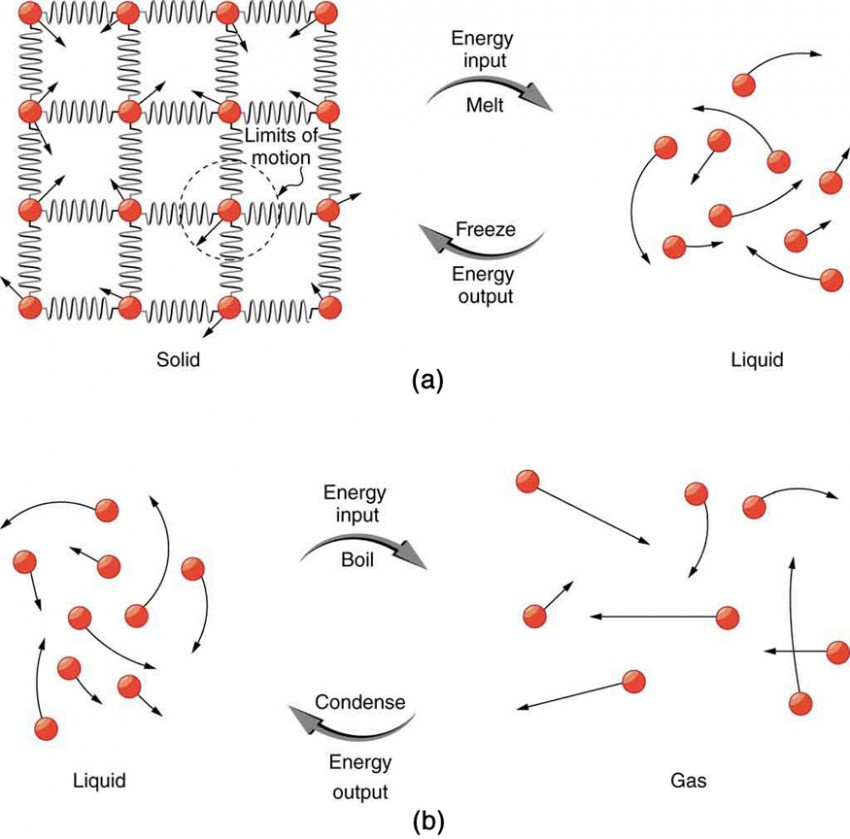 Figure 2. (a) Energy is required to partially overcome the attractive forces between molecules in a solid to form a liquid. That same energy must be removed for freezing to take place. (b) Molecules are separated by large distances when going from liquid to vapor, requiring significant energy to overcome molecular attraction. The same energy must be removed for condensation to take place. There is no temperature change until a phase change is complete.

Latent heat is measured in units of J/kg. Both Lf and Lv depend on the substance, particularly on the strength of its molecular forces as noted earlier. Lf and Lv are collectively called latent heat coefficients. They are latent, or hidden, because in phase changes, energy enters or leaves a system without causing a temperature change in the system; so, in effect, the energy is hidden. Table 1 lists representative values of Lf and Lv, together with melting and boiling points.

The table shows that significant amounts of energy are involved in phase changes. Let us look, for example, at how much energy is needed to melt a kilogram of ice at 0ºC to produce a kilogram of water at 0°C. Using the equation for a change in temperature and the value for water from Table 1, we find that Q = mLf = (1.0 kg)(334 kJ/kg) = 334 kJ is the energy to melt a kilogram of ice. This is a lot of energy as it represents the same amount of energy needed to raise the temperature of 1 kg of liquid water from 0ºC to 79.8ºC. Even more energy is required to vaporize water; it would take 2256 kJ to change 1 kg of liquid water at the normal boiling point (100ºC at atmospheric pressure) to steam (water vapor). This example shows that the energy for a phase change is enormous compared to energy associated with temperature changes without a phase change.

Phase changes can have a tremendous stabilizing effect even on temperatures that are not near the melting and boiling points, because evaporation and condensation (conversion of a gas into a liquid state) occur even at temperatures below the boiling point. Take, for example, the fact that air temperatures in humid climates rarely go above 35.0ºC, which is because most heat transfer goes into evaporating water into the air. Similarly, temperatures in humid weather rarely fall below the dew point because enormous heat is released when water vapor condenses. 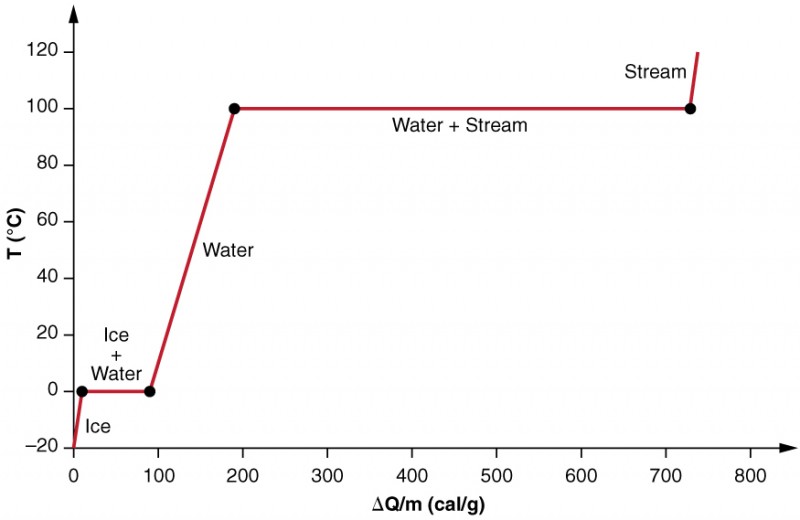 Figure 3. A graph of temperature versus energy added. The system is constructed so that no vapor evaporates while ice warms to become liquid water, and so that, when vaporization occurs, the vapor remains in of the system. The long stretches of constant temperature values at 0ºC and 100ºC reflect the large latent heat of melting and vaporization, respectively.

Water can evaporate at temperatures below the boiling point. More energy is required than at the boiling point, because the kinetic energy of water molecules at temperatures below 100ºC is less than that at 100ºC, hence less energy is available from random thermal motions. Take, for example, the fact that, at body temperature, perspiration from the skin requires a heat input of 2428 kJ/kg, which is about 10 percent higher than the latent heat of vaporization at 100ºC. This heat comes from the skin, and thus provides an effective cooling mechanism in hot weather. High humidity inhibits evaporation, so that body temperature might rise, leaving unevaporated sweat on your brow.

Three ice cubes are used to chill a soda at 20ºC with mass msoda = 0.25 kg. The ice is at 0ºC and each ice cube has a mass of 6.0 g. Assume that the soda is kept in a foam container so that heat loss can be ignored. Assume the soda has the same heat capacity as water. Find the final temperature when all ice has melted.

The ice cubes are at the melting temperature of 0ºC. Heat is transferred from the soda to the ice for melting. Melting of ice occurs in two steps: first the phase change occurs and solid (ice) transforms into liquid water at the melting temperature, then the temperature of this water rises. Melting yields water at 0ºC, so more heat is transferred from the soda to this water until the water plus soda system reaches thermal equilibrium, Qice = − Qsoda.

The heat transferred to the ice is

Bring all terms involving Tf on the left-hand-side and all other terms on the right-hand-side. Solve for the unknown quantity Tf:

This example illustrates the enormous energies involved during a phase change. The mass of ice is about 7 percent the mass of water but leads to a noticeable change in the temperature of soda. Although we assumed that the ice was at the freezing temperature, this is incorrect: the typical temperature is −6ºC. However, this correction gives a final temperature that is essentially identical to the result we found. Can you explain why? 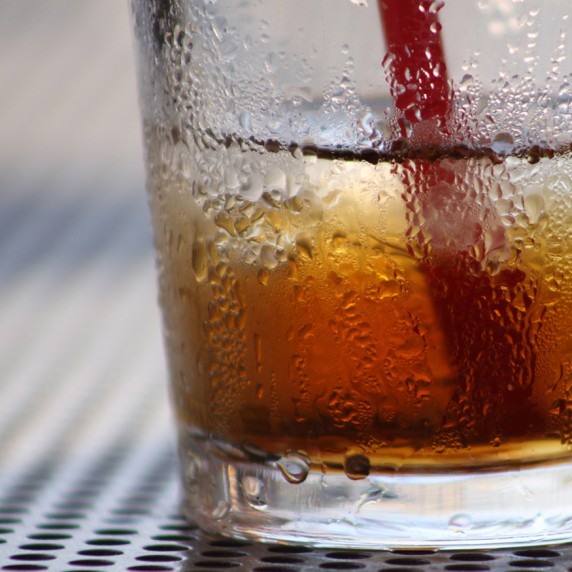 We have seen that vaporization requires heat transfer to a liquid from the surroundings, so that energy is released by the surroundings. Condensation is the reverse process, increasing the temperature of the surroundings. This increase may seem surprising, since we associate condensation with cold objects—the glass in the figure, for example. However, energy must be removed from the condensing molecules to make a vapor condense. The energy is exactly the same as that required to make the phase change in the other direction, from liquid to vapor, and so it can be calculated from Q = mLv.

Condensation forms in Figure 4 because the temperature of the nearby air is reduced to below the dew point. The air cannot hold as much water as it did at room temperature, and so water condenses. Energy is released when the water condenses, speeding the melting of the ice in the glass.

Energy is also released when a liquid freezes. This phenomenon is used by fruit growers in Florida to protect oranges when the temperature is close to the freezing point (0ºC). Growers spray water on the plants in orchards so that the water freezes and heat is released to the growing oranges on the trees. This prevents the temperature inside the orange from dropping below freezing, which would damage the fruit. 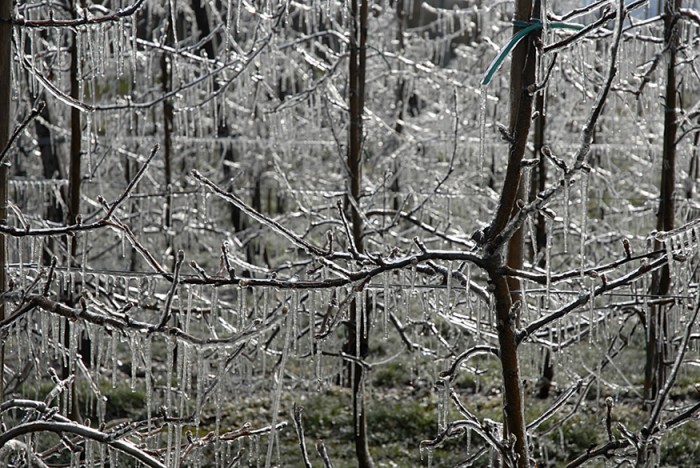 Figure 14.11. The ice on these trees released large amounts of energy when it froze, helping to prevent the temperature of the trees from dropping below 0ºC. Water is intentionally sprayed on orchards to help prevent hard frosts. (credit: Hermann Hammer)

Sublimation is the transition from solid to vapor phase. You may have noticed that snow can disappear into thin air without a trace of liquid water, or the disappearance of ice cubes in a freezer. The reverse is also true: Frost can form on very cold windows without going through the liquid stage. A popular effect is the making of “smoke” from dry ice, which is solid carbon dioxide. Sublimation occurs because the equilibrium vapor pressure of solids is not zero. Certain air fresheners use the sublimation of a solid to inject a perfume into the room. Moth balls are a slightly toxic example of a phenol (an organic compound) that sublimates, while some solids, such as osmium tetroxide, are so toxic that they must be kept in sealed containers to prevent human exposure to their sublimation-produced vapors. 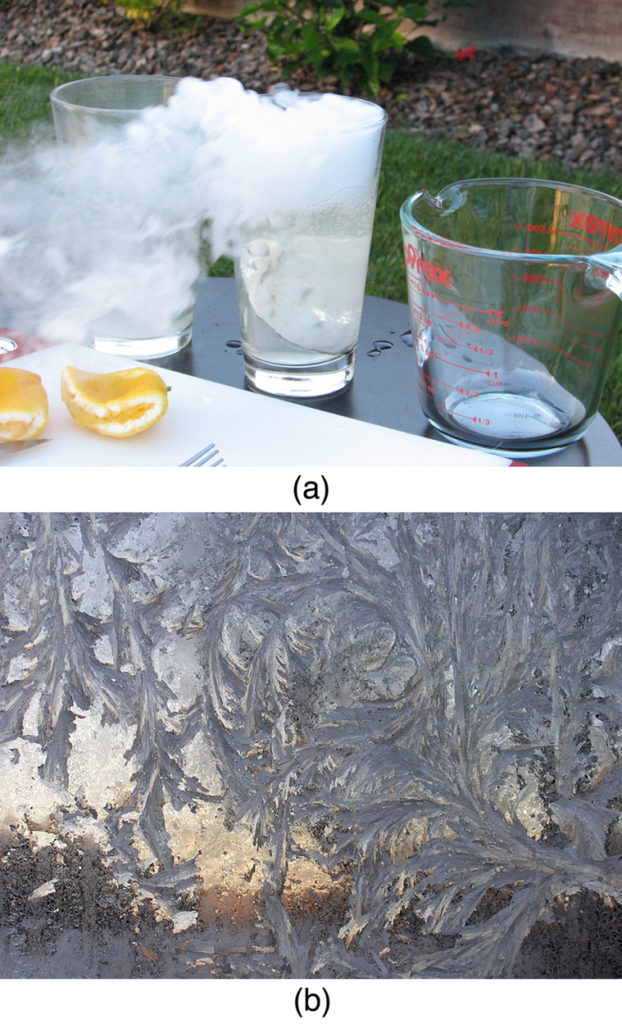 Figure 5. Direct transitions between solid and vapor are common, sometimes useful, and even beautiful. (a) Dry ice sublimates directly to carbon dioxide gas. The visible vapor is made of water droplets. (credit: Windell Oskay) (b) Frost forms patterns on a very cold window, an example of a solid formed directly from a vapor. (credit: Liz West)

All phase transitions involve heat. In the case of direct solid-vapor transitions, the energy required is given by the equation Q = mLs, where Ls is the heat of sublimation, which is the energy required to change 1.00 kg of a substance from the solid phase to the vapor phase. Ls is analogous to Lf and Lv, and its value depends on the substance. Sublimation requires energy input, so that dry ice is an effective coolant, whereas the reverse process (i.e., frosting) releases energy. The amount of energy required for sublimation is of the same order of magnitude as that for other phase transitions.

Problem-Solving Strategies for the Effects of Heat Transfer

Why does snow remain on mountain slopes even when daytime temperatures are higher than the freezing temperature?

Snow is formed from ice crystals and thus is the solid phase of water. Because enormous heat is necessary for phase changes, it takes a certain amount of time for this heat to be accumulated from the air, even if the air is above 0ºC. The warmer the air is, the faster this heat exchange occurs and the faster the snow melts.

heat of sublimation: the energy required to change a substance from the solid phase to the vapor phase

latent heat coefficient: a physical constant equal to the amount of heat transferred for every 1 kg of a substance during the change in phase of the substance

sublimation: the transition from the solid phase to the vapor phase

10. (a) 9.67 L; (b) Crude oil is less dense than water, so it floats on top of the water, thereby exposing it to the oxygen in the air, which it uses to burn. Also, if the water is under the oil, it is less efficient in absorbing the heat generated by the oil.