A graph, like a picture, is worth a thousand words. Graphs not only contain numerical information; they also reveal relationships between physical quantities. This section uses graphs of displacement, velocity, and acceleration versus time to illustrate one-dimensional kinematics.

Here m is the slope, defined to be the rise divided by the run (as seen in the figure) of the straight line. The letter b is used for the y-intercept, which is the point at which the line crosses the vertical axis. 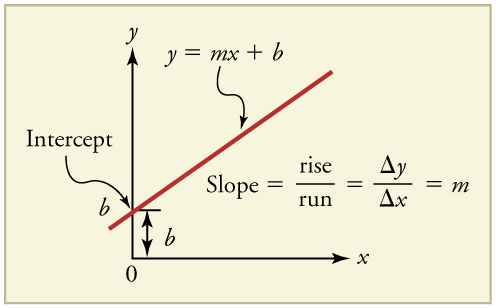 Figure 1. A straight-line graph. The equation for a straight line is . 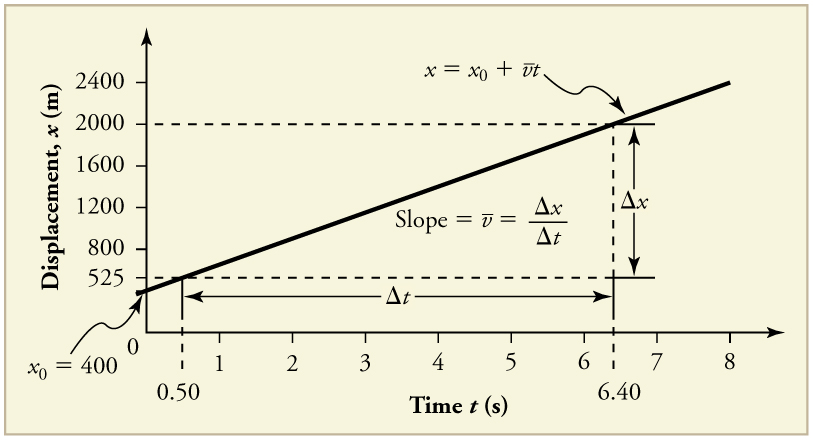 Figure 2. Graph of displacement versus time for a jet-powered car on the Bonneville Salt Flats.

Using the relationship between dependent and independent variables, we see that the slope in the graph above is average velocity [latex]\bar{v}\\[/latex] and the intercept is displacement at time zero—that is, x0. Substituting these symbols into [latex]y=\text{mx}+b\\[/latex] gives

Thus a graph of displacement versus time gives a general relationship among displacement, velocity, and time, as well as giving detailed numerical information about a specific situation.

The Slope of x vs. t

The slope of the graph of displacement x vs. time t is velocity v.

Notice that this equation is the same as that derived algebraically from other motion equations in Motion Equations for Constant Acceleration in One Dimension.

From the figure we can see that the car has a displacement of 400 m at time 0.650 m at t = 1.0 s, and so on. Its displacement at times other than those listed in the table can be read from the graph; furthermore, information about its velocity and acceleration can also be obtained from the graph.

Example 1. Determining Average Velocity from a Graph of Displacement versus Time: Jet Car

Find the average velocity of the car whose position is graphed in Figure 2.

The slope of a graph of x vs. t is average velocity, since slope equals rise over run. In this case, rise = change in displacement and run = change in time, so that

Since the slope is constant here, any two points on the graph can be used to find the slope. (Generally speaking, it is most accurate to use two widely separated points on the straight line. This is because any error in reading data from the graph is proportionally smaller if the interval is larger.)

2. Substitute the x and t values of the chosen points into the equation. Remember in calculating change (Δ) we always use final value minus initial value.

Graphs of Motion when a is constant but a≠0

The graphs in Figure 3 below represent the motion of the jet-powered car as it accelerates toward its top speed, but only during the time when its acceleration is constant. Time starts at zero for this motion (as if measured with a stopwatch), and the displacement and velocity are initially 200 m and 15 m/s, respectively.

Figure 3. Graphs of motion of a jet-powered car during the time span when its acceleration is constant. (a) The slope of an x vs. t graph is velocity. This is shown at two points, and the instantaneous velocities obtained are plotted in the next graph. Instantaneous velocity at any point is the slope of the tangent at that point. (b) The slope of the v vs. t graph is constant for this part of the motion, indicating constant acceleration. (c) Acceleration has the constant value of 5.0 m/s2 over the time interval plotted. 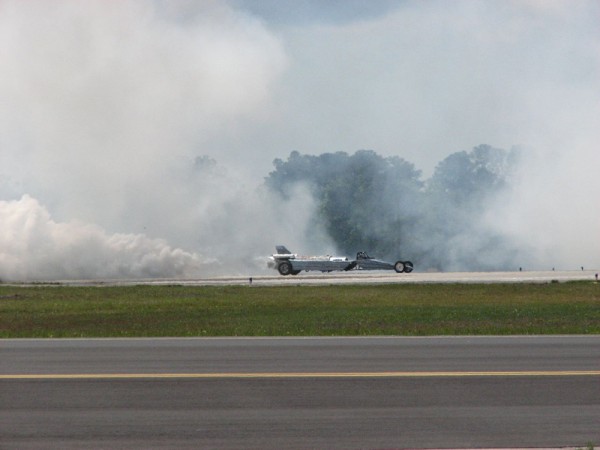 Example 2. Determining Instantaneous Velocity from the Slope at a Point: Jet Car

Calculate the velocity of the jet car at a time of 25 s by finding the slope of the x vs. t graph in the graph below. 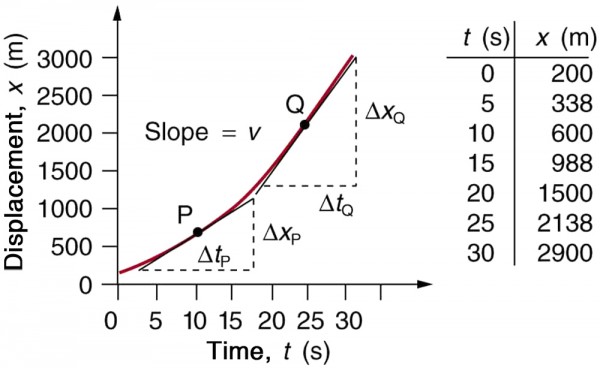 The slope of an x vs. t graph is velocity. This is shown at two points. Instantaneous velocity at any point is the slope of the tangent at that point.

The slope of a curve at a point is equal to the slope of a straight line tangent to the curve at that point. This principle is illustrated in Figure 5, where Q is the point at t=25 s.

3. Plug these endpoints into the equation to solve for the slope, v.

This is the value given in this figure’s table for v at t = 25 s. The value of 140 m/s for vQ is plotted in Figure 5. The entire graph of v vs. t can be obtained in this fashion.

Carrying this one step further, we note that the slope of a velocity versus time graph is acceleration. Slope is rise divided by run; on a v vs. t graph, rise = change in velocity Δv and run = change in time Δt.

The Slope of v vs. t

The slope of a graph of velocity v vs. time t is acceleration a.

Additional general information can be obtained from Figure 5 and the expression for a straight line,[latex]y=\text{mx}+b\\[/latex].

In this case, the vertical axis y is V, the intercept b is v0, the slope m is a, and the horizontal axis x is t. Substituting these symbols yields

A general relationship for velocity, acceleration, and time has again been obtained from a graph. Notice that this equation was also derived algebraically from other motion equations in Motion Equations for Constant Acceleration in One Dimension.

It is not accidental that the same equations are obtained by graphical analysis as by algebraic techniques. In fact, an important way to discover physical relationships is to measure various physical quantities and then make graphs of one quantity against another to see if they are correlated in any way. Correlations imply physical relationships and might be shown by smooth graphs such as those above. From such graphs, mathematical relationships can sometimes be postulated. Further experiments are then performed to determine the validity of the hypothesized relationships.

Graphs of Motion Where Acceleration is Not Constant

Now consider the motion of the jet car as it goes from 165 m/s to its top velocity of 250 m/s, graphed in Figure 6. Time again starts at zero, and the initial displacement and velocity are 2900 m and 165 m/s, respectively. (These were the final displacement and velocity of the car in the motion graphed in Figure 3.) Acceleration gradually decreases from 5.0 m/s2 to zero when the car hits 250 m/s. The slope of the x vs. t graph increases until t=55 s, after which time the slope is constant. Similarly, velocity increases until 55 s and then becomes constant, since acceleration decreases to zero at 55 s and remains zero afterward. 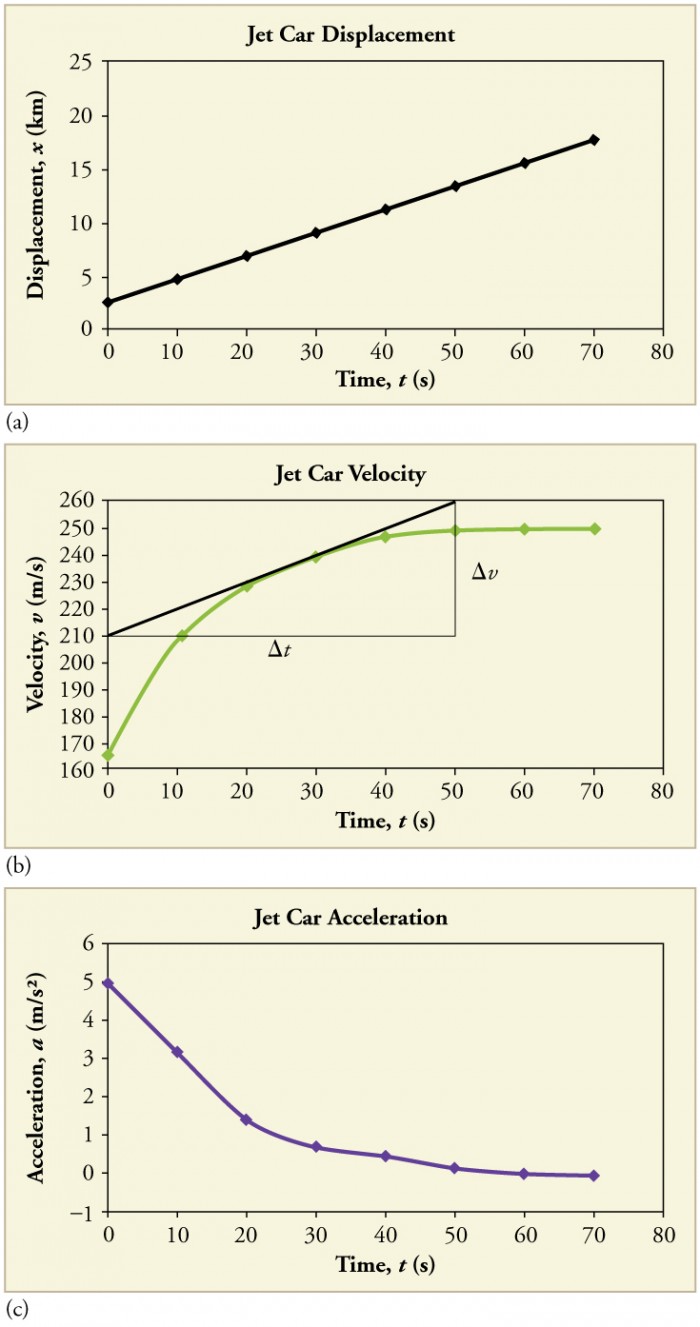 Figure 6. Graphs of motion of a jet-powered car as it reaches its top velocity. This motion begins where the motion in Figure 3 ends. (a) The slope of this graph is velocity; it is plotted in the next graph. (b) The velocity gradually approaches its top value. The slope of this graph is acceleration; it is plotted in the final graph. (c) Acceleration gradually declines to zero when velocity becomes constant.

Example 3. Calculating Acceleration from a Graph of Velocity versus Time

Calculate the acceleration of the jet car at a time of 25 s by finding the slope of the v vs. t graph in Figure 6(b).

Determine endpoints of the tangent line from the figure, and then plug them into the equation to solve for slope, a.

Note that this value for a is consistent with the value plotted in Figure 6(c) at t = 25 s.

A graph of velocity vs. time of a ship coming into a harbor is shown below. (a) Describe the motion of the ship based on the graph. (b)What would a graph of the ship’s acceleration look like? 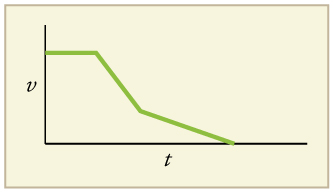 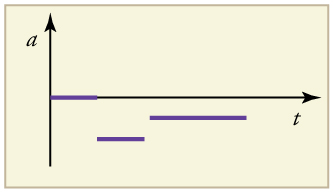 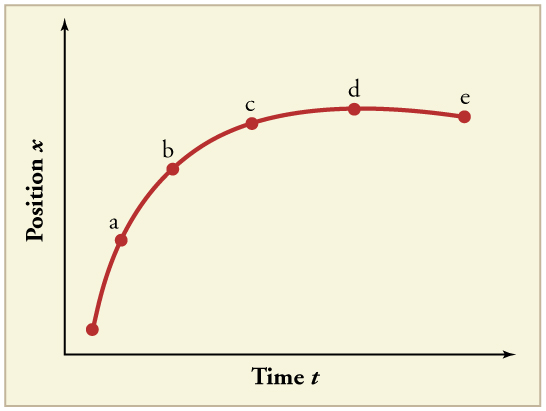 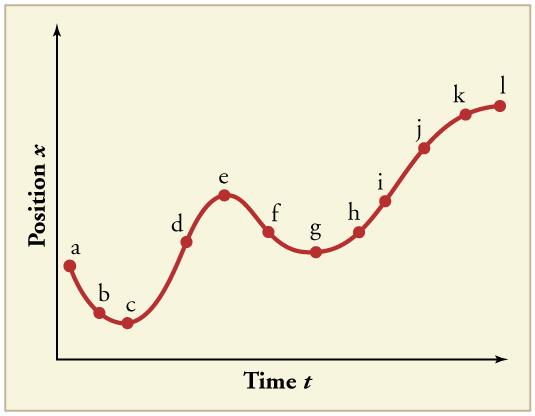 3. (a) Explain how you can determine the acceleration over time from a velocity versus time graph such as the one in Figure 11. (b) Based on the graph, how does acceleration change over time? 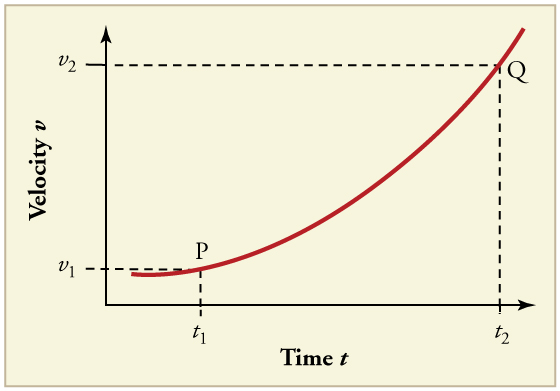 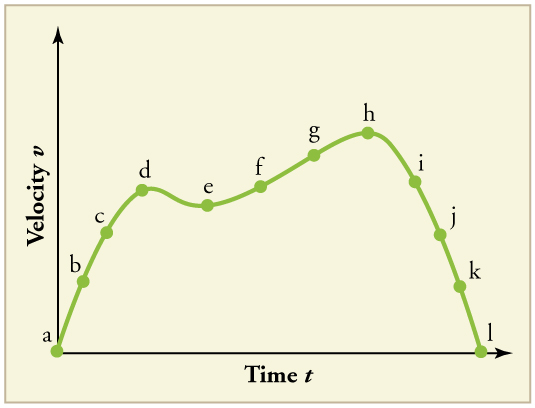 5. Consider the velocity vs. time graph of a person in an elevator shown in Figure 13 Suppose the elevator is initially at rest. It then accelerates for 3 seconds, maintains that velocity for 15 seconds, then decelerates for 5 seconds until it stops. The acceleration for the entire trip is not constant so we cannot use the equations of motion from Motion Equations for Constant Acceleration in One Dimension for the complete trip. (We could, however, use them in the three individual sections where acceleration is a constant.) Sketch graphs of: (a) position vs. time and (b) acceleration vs. time for this trip. 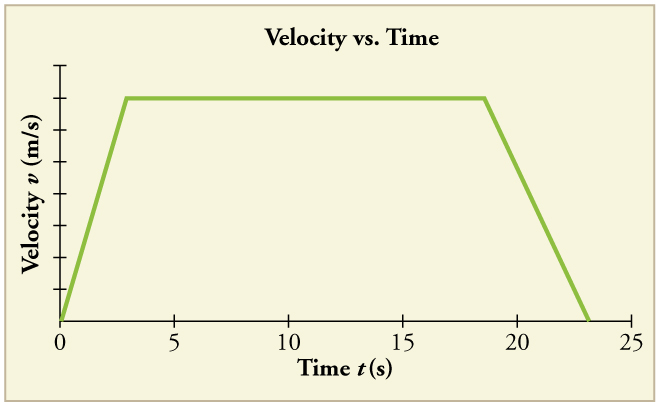 6. A cylinder is given a push and then rolls up an inclined plane. If the origin is the starting point, sketch the position, velocity, and acceleration of the cylinder vs. time as it goes up and then down the plane.

Note: There is always uncertainty in numbers taken from graphs. If your answers differ from expected values, examine them to see if they are within data extraction uncertainties estimated by you. 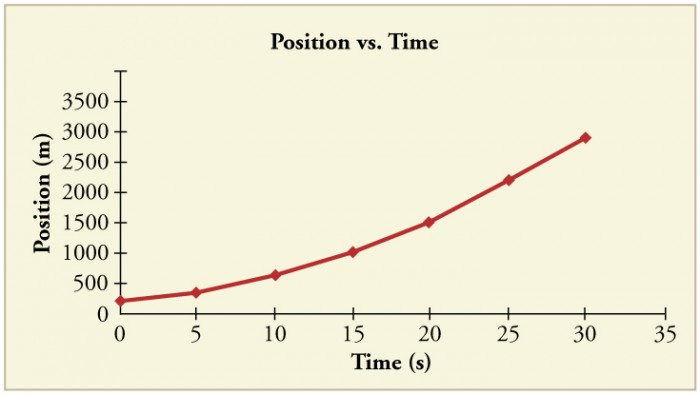 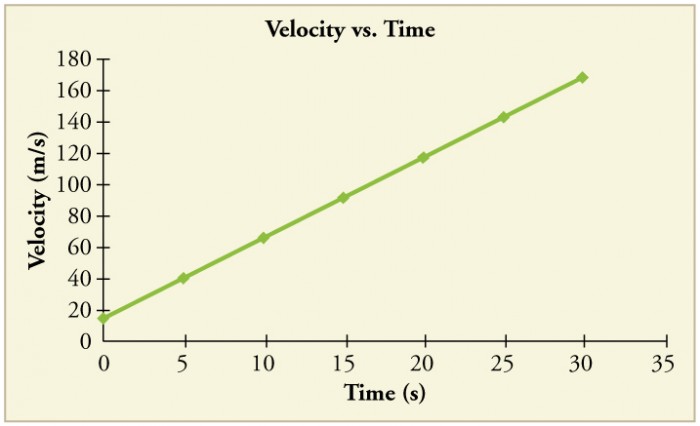 2. Using approximate values, calculate the slope of the curve in Figure 16 to verify that the velocity at t=10.0 s is 0.208 m/s. Assume all values are known to 3 significant figures. 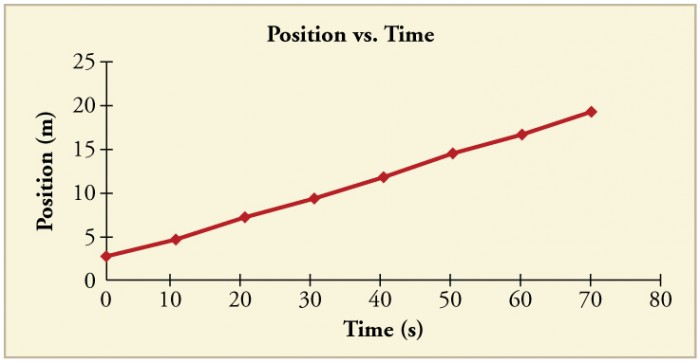 3. Using approximate values, calculate the slope of the curve in Figure 16 to verify that the velocity at t = 30.0 s is 0.238 m/s. Assume all values are known to 3 significant figures. 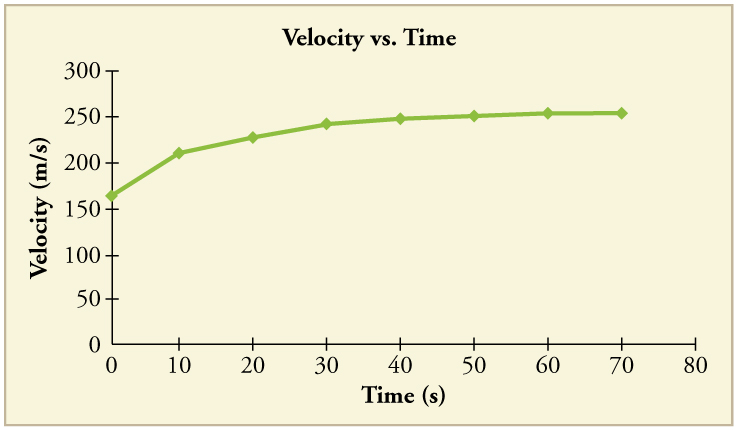 5. Construct the displacement graph for the subway shuttle train as shown in Figure 2 from Acceleration (shown again below). Your graph should show the position of the train, in kilometers, from t = 0 to 20 s. You will need to use the information on acceleration and velocity given in the examples for this figure.

A subway train in Sao Paulo, Brazil, decelerates as it comes into a station. It is accelerating in a direction opposite to its direction of motion. (credit: Yusuke Kawasaki, Flickr) 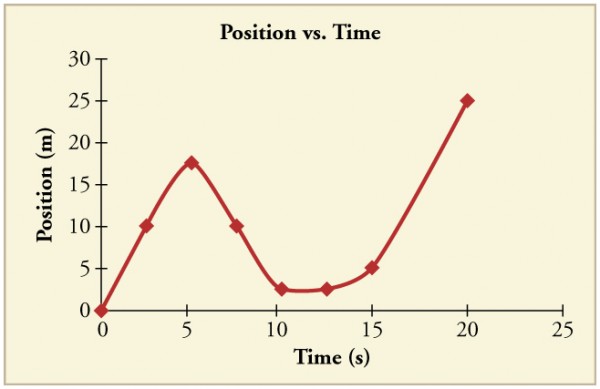 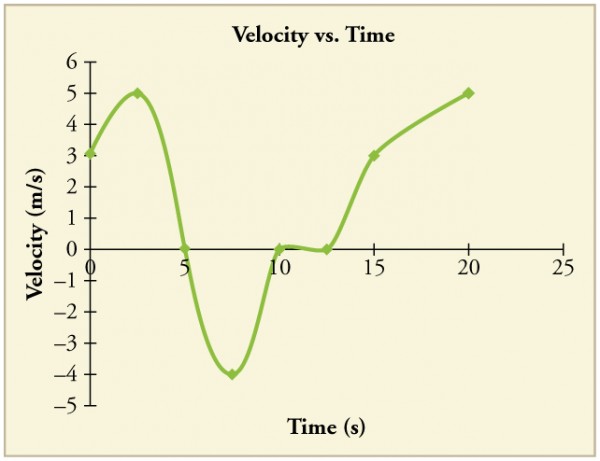 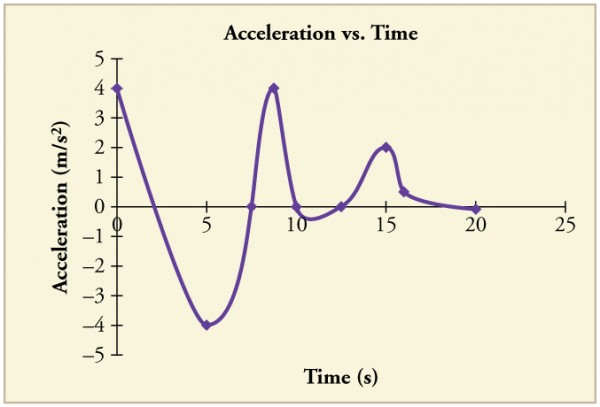 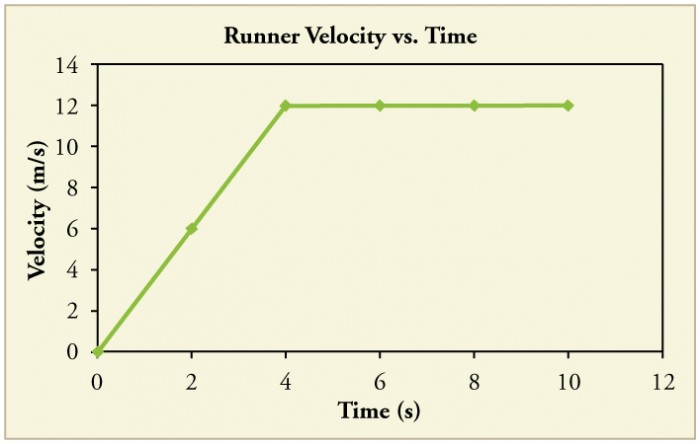 8. Figure 22 shows the displacement graph for a particle for 5 s. Draw the corresponding velocity and acceleration graphs. 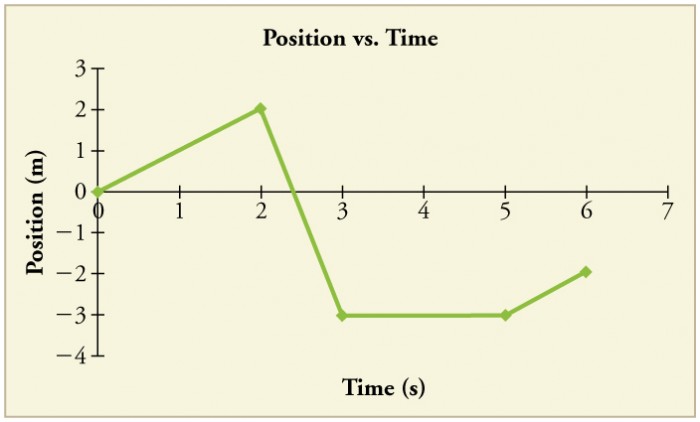 dependent variable:
the variable that is being measured; usually plotted along the y-axis

y-intercept:
the y-value when x = 0, or when the graph crosses the y-axis 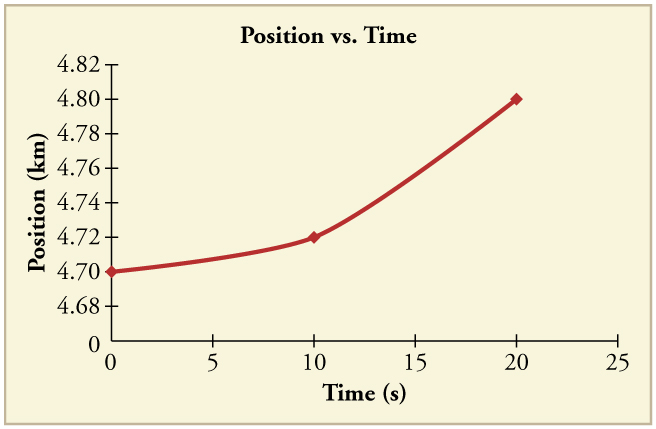