The gift of vision is made richer by the existence of color. Objects and lights abound with thousands of hues that stimulate our eyes, brains, and emotions. Two basic questions are addressed in this brief treatment—what does color mean in scientific terms, and how do we, as humans, perceive it?

We have already noted that color is associated with the wavelength of visible electromagnetic radiation. When our eyes receive pure-wavelength light, we tend to see only a few colors. Six of these (most often listed) are red, orange, yellow, green, blue, and violet. These are the rainbow of colors produced when white light is dispersed according to different wavelengths. There are thousands of other hues that we can perceive. These include brown, teal, gold, pink, and white. One simple theory of color vision implies that all these hues are our eye’s response to different combinations of wavelengths. This is true to an extent, but we find that color perception is even subtler than our eye’s response for various wavelengths of light. 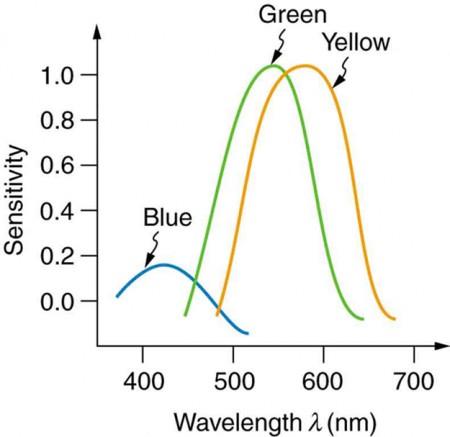 Cones are most concentrated in the fovea, the central region of the retina. There are no rods here. The fovea is at the center of the macula, a 5 mm diameter region responsible for our central vision. The cones work best in bright light and are responsible for high resolution vision. There are about 6 million cones in the human retina. There are three types of cones, and each type is sensitive to different ranges of wavelengths, as illustrated in Figure 1.

A simplified theory of color vision is that there are three primary colors corresponding to the three types of cones. The thousands of other hues that we can distinguish among are created by various combinations of stimulations of the three types of cones. Color television uses a three-color system in which the screen is covered with equal numbers of red, green, and blue phosphor dots. The broad range of hues a viewer sees is produced by various combinations of these three colors. For example, you will perceive yellow when red and green are illuminated with the correct ratio of intensities. White may be sensed when all three are illuminated. Then, it would seem that all hues can be produced by adding three primary colors in various proportions. But there is an indication that color vision is more sophisticated. There is no unique set of three primary colors. Another set that works is yellow, green, and blue. A further indication of the need for a more complex theory of color vision is that various different combinations can produce the same hue. Yellow can be sensed with yellow light, or with a combination of red and green, and also with white light from which violet has been removed. The three-primary-colors aspect of color vision is well established; more sophisticated theories expand on it rather than deny it.

Consider why various objects display color—that is, why are feathers blue and red in a crimson rosella? The true color of an object is defined by its absorptive or reflective characteristics. Figure 2 shows white light falling on three different objects, one pure blue, one pure red, and one black, as well as pure red light falling on a white object. Other hues are created by more complex absorption characteristics. Pink, for example on a galah cockatoo, can be due to weak absorption of all colors except red. An object can appear a different color under non-white illumination. For example, a pure blue object illuminated with pure red light will appear black, because it absorbs all the red light falling on it. But, the true color of the object is blue, which is independent of illumination. 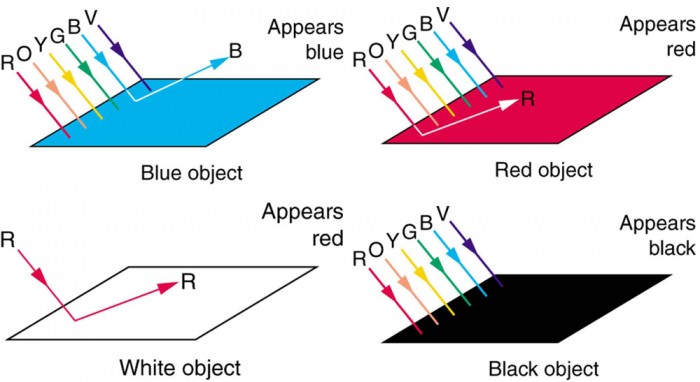 Figure 2. Absorption characteristics determine the true color of an object. Here, three objects are illuminated by white light, and one by pure red light. White is the equal mixture of all visible wavelengths; black is the absence of light.

Similarly, light sources have colors that are defined by the wavelengths they produce. A helium-neon laser emits pure red light. In fact, the phrase “pure red light” is defined by having a sharp constrained spectrum, a characteristic of laser light. The Sun produces a broad yellowish spectrum, fluorescent lights emit bluish-white light, and incandescent lights emit reddish-white hues as seen in Figure 3. As you would expect, you sense these colors when viewing the light source directly or when illuminating a white object with them. All of this fits neatly into the simplified theory that a combination of wavelengths produces various hues.

This activity is best done with plastic sheets of different colors as they allow more light to pass through to our eyes. However, thin sheets of paper and fabric can also be used. Overlay different colors of the material and hold them up to a white light. Using the theory described above, explain the colors you observe. You could also try mixing different crayon colors. 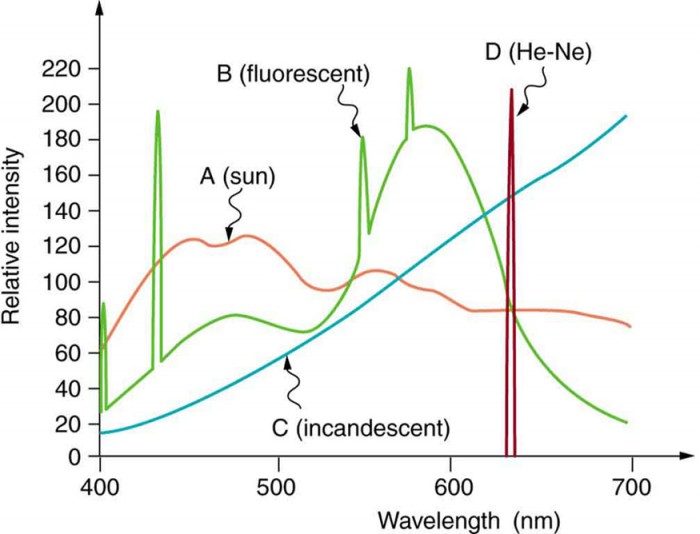 Figure 3. Emission spectra for various light sources are shown. Curve A is average sunlight at Earth’s surface, curve B is light from a fluorescent lamp, and curve C is the output of an incandescent light. The spike for a helium-neon laser (curve D) is due to its pure wavelength emission. The spikes in the fluorescent output are due to atomic spectra—a topic that will be explored later.

Color Constancy and a Modified Theory of Color Vision

The eye-brain color-sensing system can, by comparing various objects in its view, perceive the true color of an object under varying lighting conditions—an ability that is called color constancy. We can sense that a white tablecloth, for example, is white whether it is illuminated by sunlight, fluorescent light, or candlelight. The wavelengths entering the eye are quite different in each case, as the graphs in Figure 3 imply, but our color vision can detect the true color by comparing the tablecloth with its surroundings. 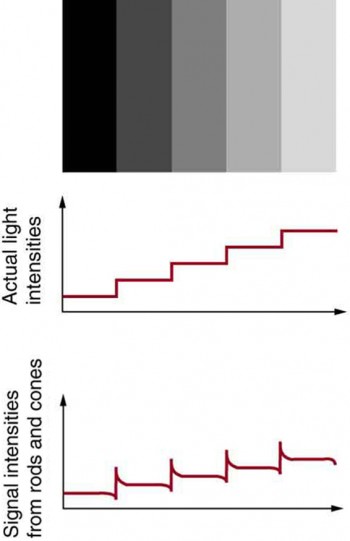 Figure 4. The importance of edges is shown. Although the grey strips are uniformly shaded, as indicated by the graph immediately below them, they do not appear uniform at all. Instead, they are perceived darker on the dark side and lighter on the light side of the edge, as shown in the bottom graph. This is due to nerve impulse processing in the eye.

Theories that take color constancy into account are based on a large body of anatomical evidence as well as perceptual studies. There are nerve connections among the light receptors on the retina, and there are far fewer nerve connections to the brain than there are rods and cones. This means that there is signal processing in the eye before information is sent to the brain. For example, the eye makes comparisons between adjacent light receptors and is very sensitive to edges as seen in Figure 4. Rather than responding simply to the light entering the eye, which is uniform in the various rectangles in this figure, the eye responds to the edges and senses false darkness variations.

One theory that takes various factors into account was advanced by Edwin Land (1909–1991), the creative founder of the Polaroid Corporation. Land proposed, based partly on his many elegant experiments, that the three types of cones are organized into systems called retinexes. Each retinex forms an image that is compared with the others, and the eye-brain system thus can compare a candle-illuminated white table cloth with its generally reddish surroundings and determine that it is actually white. This retinex theory of color vision is an example of modified theories of color vision that attempt to account for its subtleties. One striking experiment performed by Land demonstrates that some type of image comparison may produce color vision. Two pictures are taken of a scene on black-and-white film, one using a red filter, the other a blue filter. Resulting black-and-white slides are then projected and superimposed on a screen, producing a black-and-white image, as expected. Then a red filter is placed in front of the slide taken with a red filter, and the images are again superimposed on a screen. You would expect an image in various shades of pink, but instead, the image appears to humans in full color with all the hues of the original scene. This implies that color vision can be induced by comparison of the black-and-white and red images. Color vision is not completely understood or explained, and the retinex theory is not totally accepted. It is apparent that color vision is much subtler than what a first look might imply.

Make a whole rainbow by mixing red, green, and blue light. Change the wavelength of a monochromatic beam or filter white light. View the light as a solid beam, or see the individual photons. 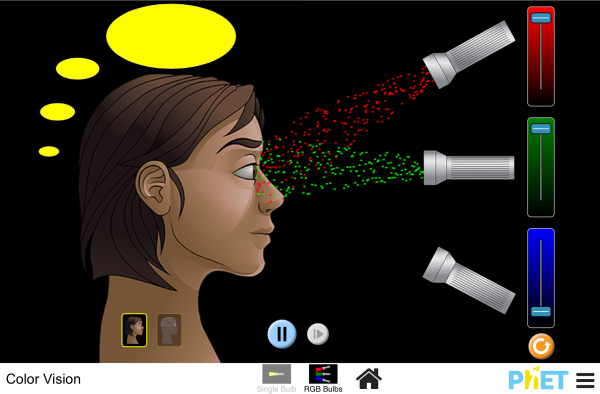 hues: identity of a color as it relates specifically to the spectrum

rods and cones: two types of photoreceptors in the human retina; rods are responsible for vision at low light levels, while cones are active at higher light levels

simplified theory of color vision: a theory that states that there are three primary colors, which correspond to the three types of cones

color constancy: a part of the visual perception system that allows people to perceive color in a variety of conditions and to see some consistency in the color

retinex: a theory proposed to explain color and brightness perception and constancies; is a combination of the words retina and cortex, which are the two areas responsible for the processing of visual information

retinex theory of color vision: the ability to perceive color in an ambient-colored environment