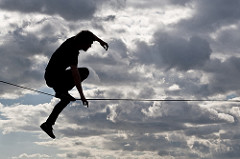 Many popular movies are now based on multiple-book series like the “Harry Potter” or “Lord of the Rings” movies. If you are a fan of these book series, you know about the anticipation you felt as the next film was ready to be released—you get swept away by the memories, you look forward to seeing the characters again. Before you even enter the theatre and take your seat, you are in a very positive mood and you are looking forward to being entertained. Perhaps you are even familiar with the details of the story you are about to watch on film; and this only adds to your feelings of anticipation. Because of your previous experiences, you have developed a frame of reference toward future events. One’s frame of reference is the context, viewpoint, or set of presuppositions or evaluative criteria within which a person’s perception and thinking seem always to occur; and which constrains selectively the course and outcome of these activities. Once your anticipation is rewarded, this frame of reference becomes how you “approach” the release of each new film in the series—your frame of reference becomes “habitual.” Evidence for this can be seen in the consistent success of the serial movies—even if critics’ opinions are harsh, fans will go see the film.

Developing the habitual frame of reference with regard to public speaking usually comes from a combination of personal experiences and what has been witnessed. Formal public speaking opportunities are most prevalent within the context of formal education—thus, public presentations are generally student-oriented experiences which are strongly associated with being evaluated or judged. Because there is such a focus upon the grade that results from the assignment, there is much less focus upon the integrity of the presentation itself. Studies have even shown that the possibility of a negative experience can lead to many students to skip assignments or drop a class—even when that class is required for graduation (Pelias, 1989). Students will often worry more about their grade rather than what is contained in their presentation. Thus, the act of public speaking takes on the pressure of taking a final exam with everyone watching. It’s no wonder so many students report that they are stressed out by public speaking! 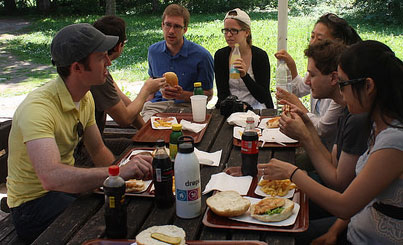 We can all recall a time when we’ve met a group of friends for lunch. Try to recall an instance when the conversation centered on the latest popular movie—and you happen to be the person in the group who saw it the night before. Was it fun? Was it worth the money? Should we go see it too? Everyone else around the table would look at you and wait to hear what you had to say. And what happened when you were faced with all these questions? Well, probably you focused on your favorite parts; probably you told the story in some sort of organized manner; probably you asked your friends whether or not they wanted you to give away the ending; and probably you were fine with any of your friends interrupting while you were talking. In short, you presented to your audience. But, since the action of public presentation was not undertaken within the stressful context of a “graded assignment,” but rather within the positive context of “lunch with friends,” you did not feel the same level of CA as with other presentations. The action was essentially the same, but the way you approached the action was completely different—solely because you perceived of yourself engaging in a fun activity (lunch with friends), and not a stressful one (public speaking). Think about how many different experiences have prompted the formation of a habitual frame of reference in you: social events with friends, holidays with family, the weekly staff meeting at work. Consider whether the way you approach the situation has anything at all to do with the sort of experience that follows. Is there a correlation between positive mood and positive outcome? Think of all the motivational aphorisms and advice you’ve heard: “Think Positive!” or “Expect Success!” all of which are based on the idea that approaching an activity with a positive attitude about your potential success is the best strategy. We need to build a positive attitude about doing something we are afraid to do.

I learned that courage was not the absence of fear, but the triumph over it. The brave man is not he who does not feel afraid, but he who conquers that fear.