“The Zombie as Barometer of Capitalist Anxiety” by D.T. Robb 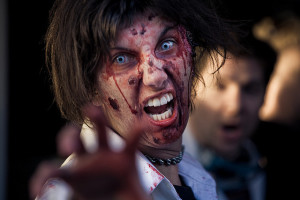 According to Peter Dendle, in his essay, “The Zombie as Barometer of Cultural Anxiety,” the zombie has “…tapped into a deep-seated anxiety about society, government, individual protection, and our increasing disconnectedness from subsistence skills.”1 Dendle states that the prevalence of the zombie in pop culture correlates to society’s fear that any sudden jolt of the status quo, undead or otherwise, would result in mass chaos, that people would be unable to protect themselves or to survive on their own.

Yet one may take the thought of this collective anxiety a step further to discern one of the underlying causes and major contributions to the general nervousness of the public and the widespread appearances of zombies in films and literature: capitalism.

According to Dendle, “the zombie, a soul-less hulk mindlessly working at the bidding of another, thus records a residual communal memory of slavery: of living a life without dignity or meaning, of going through the motions.”1 Here we see the zombie’s origins, as corpses reanimated by bourgeois landowners or factory foremen through some rites of magick for the sake of performing menial labour without demanding fair wages, hours, and treatment, never tiring or making mistakes.

This is one of the earliest iterations of the zombie, and the origin of the capitalist metaphor. The proto-capitalist economy of nineteenth century America was dependent on slave labour, and pro-slavery politicians of the time argued that the economy of the South would have collapsed entirely should slavery be outlawed. Here it is evident how a fear and disdain of capitalism would have been imprinted on the minds of the enslaved Africans and Haitians, from whose culture the zombie originated. They were slaves because slavery was profitable, vital to economy and thus not morally bankrupt to the slave owners, and an implicit resistance to this system would have been planted.

In Max Brooks’ World War Z, a critique of capitalism is offered in the form of Phalanx, a vaccine manufactured to prevent “rabies” and sold as a solution to the developing zombie crisis; Phalanx was pushed through the FDA by the government (and the corporations that control it) despite a lack of testing and evidence regarding the zombie virus, for the sake of keeping the populace calm while earning unprecedented profits at the expense of the victimized masses. According to Breckenridge Scott, the character responsible for Phalanx:
“It protected them from their fears. That’s all I was selling. Hell, because of Phalanx, the biomed sector started to recover, which, in turn, jump-started the stock market, which then gave the impression of a recovery, which then restored consumer confidence to stimulate an actual recovery!”3

This passage shows how the bourgeois businessman Scott justified selling his snake oil to the masses, in that the mass production of Phalanx and its widespread sales led to an economic recovery, and the reader is presented with the conflicting viewpoints between economic recovery and the deaths of millions of misled humans. The reader is presented with the question of whether the economy should take precedent over the well-being of the people, and while the choice is obvious, it shows the reader that corporations will sacrifice lives for their bottom lines. 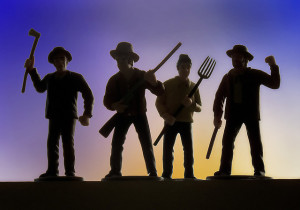 A defining feature of the zombie is the loss of the individual’s sentience once transformed into the undead, just as a loss of sentience occurs in the individual within a consumer capitalist culture, at the hands of mass marketing and advertising.

On the subject of the loss of free will, author Chuck Palahniuk wittily writes:
“Experts in ancient Greek culture say that people back then didn’t see their thoughts as belonging to them. When ancient Greeks had a thought, it occurred to them as a god or goddess giving an order… Now people hear a commercial for sour cream potato chips and rush out to buy, but now they call this free will. At least the ancient Greeks were being honest.”4

Here Palahniuk’s anti-capitalist sentiments can be translated to the parallel between zombies and consumers, as both experiences a loss of sentience, and of the individual. The zombie is a monster of majority, unlike its vampiric and lupine counterparts, as those in our society who are given to the consumer instinct are a majority and the few individuals who criticize capitalism from within it are persecuted and defamed in the way that zombies will swarm and attack an uninfected human. In addition, the zombie is a mechanism of annihilation; while vampires are a small minority living in the underground of a human world, feeding to survive, the zombie horde exists only for the purpose of consuming or converting all humans until the species is extinct and the paradigm shifts to a world inhabited only by zombies.

This is similar to the cries of the left wing, who accuse the right—the upholders of laissez-faire capitalism and unwavering nationalism—of demanding conformity of all to their belief systems and ways of living (if you don’t like America, well you can just get out). However, Dendle postulates that while zombie apocalypse films and novels capitalize on the anxiety of the masses, the underlying purpose of zombie culture is not to display the end of the world but to illustrate how the world may be profoundly changed for the better by means of the old world’s destruction. Dendle states: “Post-apocalyptic zombie worlds are fantasies of liberation: the intrepid pioneers of a new world trek through the shattered remnants of the old, trudging through the shells of buildings and the husks of people.”1

In World War Z, the sundering of the zeitgeist in the United States shatters the pre-existing capitalistic and highly individualized philosophy of the masses and opens up the populace, through their vulnerability, to survival only through communal life and cooperation. However, even Brooks’ profound statements regarding cooperation are contradicted within his novel, in the example of socialist Cuba becoming a booming post-war capitalist force. One can infer from the critiques of both capitalism and communism that Brooks supports neither in his writing, adding another layer to the zombie-capitalist.

I believe that the impact of Brooks’ novel regarding our economic anxiety can be summarized by this statement of a Japanese character late in the novel: “His generation wanted to rule the world, and mine was content to let the world, and by the world I mean [the United States], rule us. There has to be a better way, a middle path where we take responsibility…”2 This is a powerful line, as it transforms the novel from a simple metaphor for capitalism to a statement that the world must take a path between capitalism and communism in order to survive and prosper, and that this path is now available as the world has an opportunity to rebuild. This is the ultimate function of the zombie, beyond cheap thrills of a horror film and beyond a criticism of the right-wing and consumer capitalism; the zombie functions to clean the slate and enable the world to rebuild anew.