Introduction to the Himalayas 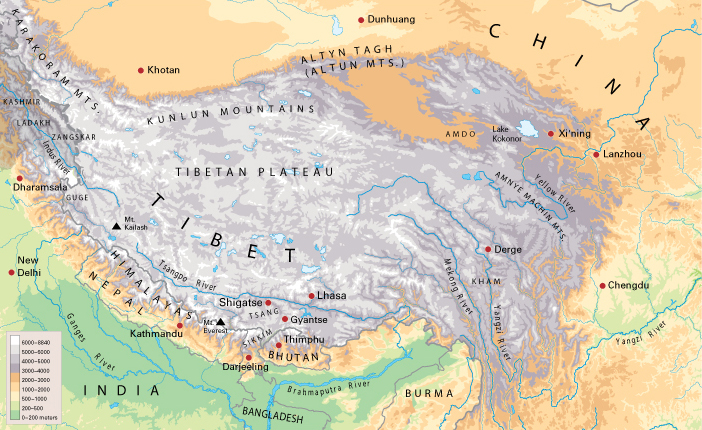 Map of the Himalayas. Courtesy of the Asian Art Museum.

The Himalayas are the highest mountain ranges in the world, and from them flow the major rivers of Asia. The kingdoms of Nepal and Bhutan are located along the Himalayan ranges, and the Tibetan plateau lies to their north. Although the Himalayas are nearly impassible, many peoples have managed the crossing and left traces of their cultures.

Surrounded by high peaks with only a few passes, the plateau of Tibet was home to people who developed their own, distinct culture, which was highly influenced by Buddhism. That religion came into Tibet in two waves: from India, Nepal, and China in the seventh century, and again from India in the eleventh century.

Tibet is located in the heart of Asia, held aloft on a vast mountainous plateau. Besides sharing borders with India to the west and south and China to the east, Tibet is also neighbor to Nepal, Sikkim, Bhutan, and Burma (Myanmar) to the south, and Eastern Turkestan to the north. The south eastern corner of Tibet is a diverse land of stark beauty and sudden dramatic changes in landscape. The northern and north-central regions of Tibet, about one third of the country, are mainly comprised of a series of mountain ranges and rocky deserts interspersed with grassy pasture. Rainfall is scarce, although sudden tempests can sweep across the land bringing sand, snow, and hailstorms with winds strong enough to blow a rider off a horse. The average elevation in the north is 16,000 feet, with a wide variation in temperatures caused by strong solar radiation. On a summer’s day the temperature could reach 100 degrees Fahrenheit at noon and plunge to 32 degrees Fahrenheit at night. These conditions make for a distinctive environment. This gives Tibetans a respectful reverence for the power and beauty of nature. The bright colors that are characteristic of Tibetan art bring warmth into this austere setting. Little more than grasses and scrub grow in this region, which is sparsely populated by hardy nomads following herds of sheep, goats, and yaks.

Tibet’s glacial waters are the source of most of the major rivers in Asia: the Sutlej, Indus, Ganges, Brahmaputra, Salween, Mekong, and Yangtze and Yellow rivers. In Tibet itself, the headwaters of these rivers nourish the land to the south and east, creating fertile valleys, gentle pasture, and milder environmental conditions. This is where most of the arable land lies and where most of Tibet’s population is concentrated. The elevation is approximately 12,000 feet and the daily temperatures fluctuate only about 40 degrees. Here grow peach, apricot, pear, and walnut trees, along with the crops raised by farmers. To the south are vast forests of pine, juniper, aspen, and willow, sheltering rare wild flowers. In the far south east of Tibet are vast rain forests where semi-tropical vegetation flourishes and banana trees are abundant. This far south eastern part of Tibet, near Laos and Vietnam, is near the tropic of Cancer, as far south as Miami and the Bahamas.

The wildlife of Tibet is a fascinating mix of the exotic and the everyday. Blue sheep, wild-yak (both unique to Tibet), gazelles, antelopes, white-lipped deer, wild asses, foxes, owls, brown bears, snow leopards, black-necked cranes, and the occasional tiger all roam “the roof of the world.” 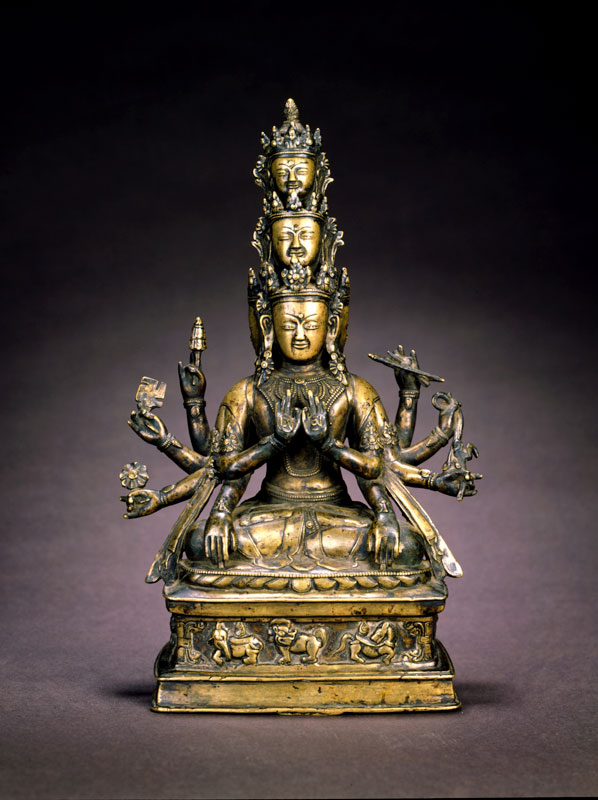 Bön, Tibet’s indigenous belief system, is a high form of religious ritualism primarily concerned with righting the causes of human ailment and misfortune and coexisting with the underlying forces of the universe. It focuses on the living, but has a clear sense of an afterlife and seeks to bring benefits and happiness in both this world and the world to come.

The Bön outlook is basically one where humans are beset by a variety of spiteful demons and temperamental local gods, who are the major cause of disease and strife in this world and danger in the next. Some of the Bön practices of exorcism have been borrowed from Tibetan Buddhism, while some of its terrifying deities and mighty demons were converted and tamed to serve as guardians of Buddhism. Bön assimilated a great deal of Buddhism’s profound doctrines and powerful rituals and has come to emulate many fundamental Buddhist theories and practices, but it also influenced Tibetan Buddhism.

In the Bön view, mountain gods are particularly important. It is through them that many clan leaders trace their ancestry from mythic god-heroes, to the first kings of Tibet, and down to the present day. It is not that they themselves were gods, but that the deity of a local mountain sent a hero to lead its clan, giving divine legitimacy to their dynasty.

Buddhism was introduced into Tibet from India and China beginning in the 600s. Over the succeeding centuries, Buddhism became the dominant cultural form in Tibet, exerting a powerful influence not only over religion, but also over politics, the arts, and other aspects of society. Tibetan Buddhism eventually spread into Mongolia and Nepal, as well as into China, where it received imperial patronage especially during the Yuan (1260–1368) and Qing (1368–1644) dynasties. 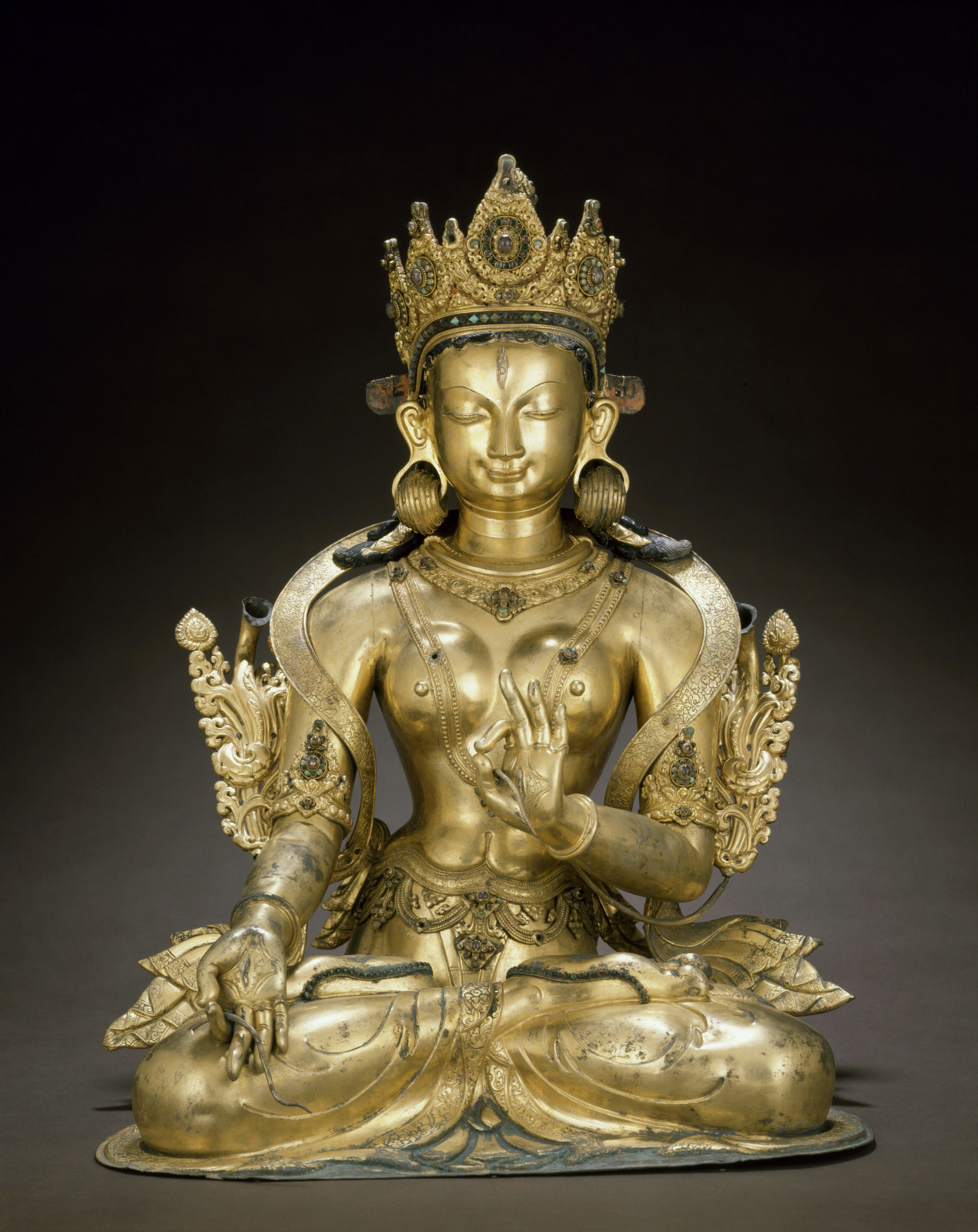 Tibetan Buddhism inherited many of the traditions of late Indian Buddhism, including a strong emphasis on monasticism (Tibet was once home to the largest Buddhist monasteries in the world), a sophisticated scholastic philosophy, and elaborate forms of tantric practice. At the same time Tibet continued its tradition of powerful popular cults, incorporating a wide variety of local deities into the already burgeoning Buddhist pantheon. Unique to Tibetan Buddhism is the institution of the tulku (incarnate lama): Tibetan Buddhists believe that compassionate teachers are reborn again and again, in each lifetime identified when they are children and invested with the office and prestige of their previous rebirths. Tibet has had many such lamas, the most famous of whom is the Dalai Lama. The Fifth Dalai Lama became ruler of Tibet in 1642, and under his rule was built the great palace of the Potala in Lhasa, the country’s capital. Tibet was incorporated into China in 1951, and the present (Fourteenth) Dalai Lama went into exile in India in 1959, when the Tibetan diaspora began. Since that time, Tibetan Buddhism has become of increasing interest to people throughout the world.

Vajrayana Buddhism, which is the form of Buddhism practiced in Tibet, provides a great variety of special practices, meditations and rituals to accomplish the goals of cultivating compassion and the ultimate liberation of all living beings. Vajrayana is based on the esoteric doctrines of Buddha Shakyamuni given to selected disciples. It uses yogic techniques of meditation, mantra, and ritual to bring about psychological and physiological transformations. Initiations and empowerments are needed to understand and engage in these techniques, and to use the sacred implements such as the vajra and ghanta (bell), sacred images (such as those in the museum collection), hand and body gestures (mudra), and sacred power words (mantra).

Tibetan Buddhism comprises four lineages. All trace themselves back to Buddha Shakyamuni in an unbroken lineage of enlightened masters and disciples that extends down to the present day. They are dis- tinguished much more by lineage than by any major difference in doctrine or practice. The four lineages are Gelukpa, Sakyapa, Nyingmapa and Kagyupa.

There are hundreds of thousands—if not millions—of images of the Buddha Shakyamuni that exist in the world today. Some are big, some are small, some are made of precious materials like gold, while others are carved of stone, cast from bronze, molded from plastic, painted on silk, or printed on paper. What makes one image of the Buddha Shakyamuni more sacred than an other? Is it it’s material composition, it’s age, it’s owner? Is it all of the above, or is it something else?

Who was Buddha Shakyamuni?

The Jowo Shakyamuni, or Jowo Rinpoche (Rinpoche means ”precious one” in the Tibetan language), is a larger than life-size image of the historical Buddha Shakyamuni housed in the Jokhang Temple in Lhasa, Tibet. Today, the Jowo Shakyamuni can be seen seated against a resplendent gold and bejeweled throne. The image itself is made of gilt metal—the effect is an image of gold hue with shocking blue hair.

Jowo Shakyamuni is seated with his legs in the lotus position or padmasana. His left hand is in the mudra (hand gesture) of meditation (dhyana mudra) and his right hand is in the gesture of “calling the earth to witness” (bhumisparsha mudra). Together, these postures signify the moment of the Buddha’s enlightenment. He is shown wearing a thin monk’s robe, which drapes over his body and covers his left shoulder. When dressed, Jowo Shakyamuni is presented with a magnificent jeweled crown and robes. Read more about Buddhism here and here.

The sculpture has undergone restoration and reconstruction over its history. The most recent of which took place after the Cultural Revolution. It is not known what the image may have originally looked like in the 7th century when it was made; however, early texts describe the sculpture as being depicted in a similarly enlightened state (seated in padmasana with hands in bhumisparsha mudra). One of the main variations is described in an 11th century text titled the Vase-Shaped Pillar Testament—the earliest written description of the image—which states that a wrathful deity is seen protruding from the Buddha’s neck.[1] No such wrathful deity can be seen today on the sculpture. Similarly, the resplendent crown and robes that the sculpture is seen wearing today are much later additions. Nonetheless, the continued restoration and veneration of the Jowo Shakyamuni over the course of its 1300 year history is a testament to its religious and cultural importance in Tibet.

The most sacred Buddha image in Tibet

While texts regarding the sculpture’s origins and history would like us to believe that the Jowo Shakyamuni is the most accurate and thereby the earliest portrait of the Buddha, the sculpture in its original form was likely made sometime during the early to middle 7th century C.E. The invention of the Buddha image in anthropomorphic (human) form dates to after the turn of the first century C.E. (circa early second century), with the advent of Mahayana Buddhism during the Kushan Dynasty. The purported date of the Jowo Shakyamuni to the time of the Buddha from the 6th-5th centuries B.C.E. is not consistent with the development of Buddha imagery in the history of Buddhist art, nor does the actual sculpture conform to stylistic conventions of early Buddha images (read more about early images of Buddha here). More convincing is an early to middle 7th century date of production for the Jowo Shakyamuni.

The earliest evidence for the sculpture dates to the 7th century when the Chinese princess, Wencheng Gongzhu, is said to have brought it to Tibet as part of her marriage dowry to emperor Songtsen Gampo in 641. This date also coincides with the foundation of Buddhism in Tibet. What this suggests is that while the Jowo Shakyamuni is not among the first images of the Buddha, its importance is not diminished as its appearance in Tibet coincides with the foundation of Buddhism in the country.

The Buddha in Lhasa

[1] There are multiple versions of the Vase-Shaped Pillar Testament.

Click here to view this video.
Video from The Asian Art Museum