A memo’s purpose is often to inform, but it occasionally includes an element of persuasion or a call to action. All organizations have informal and formal communication networks. The unofficial, informal communication network within an organization is often called the grapevine, and it is often characterized by rumor, gossip, and innuendo. On the grapevine, one person may hear that someone else is going to be laid off and start passing the news around. Rumors change and transform as they are passed from person to person, and before you know it, the word is that they are shutting down your entire department. 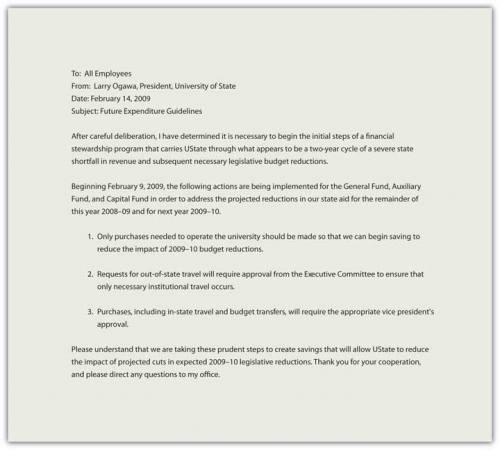 Memos are often announcements, and the person sending the memo speaks for a part or all of the organization. While it may contain a request for feedback, the announcement itself is linear, from the organization to the employees. The memo may have legal standing as it often reflects policies or procedures, and may reference an existing or new policy in the employee manual, for example.

Some written business communication allows for a choice between direct and indirect formats, but memorandums are always direct. The purpose is clearly announced.

1. Find a memo from your work or business, or borrow one from someone you know. Share it with your classmates, observing confidentiality by blocking out identifying details such as the name of the sender, recipient, and company. Compare and contrast.

2. Write a memo informing your class that an upcoming holiday will be observed. Post and share with classmates.