Within the troposphere are convection cells (Figure below). 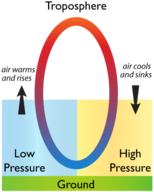 Convection in the atmosphere creates the planet’s weather. When warm air rises and cools in a low pressure zone, it may not be able to hold all the water it contains as vapor. Some water vapor may condense to form clouds or precipitation. When cool air descends, it warms. Since it can then hold more moisture, the descending air will evaporate water on the ground.

An online guide to air pressure and winds from the University of Illinois is found here: http://ww2010.atmos.uiuc.edu/%28Gh%29/guides/mtr/fw/home.rxml.

How do sea and land breezes moderate coastal climates?

Monsoon winds are larger scale versions of land and sea breezes; they blow from the sea onto the land in summer and from the land onto the sea in winter. Monsoon winds are occur where very hot summer lands are next to the sea. Thunderstorms are common during monsoons (Figure below). 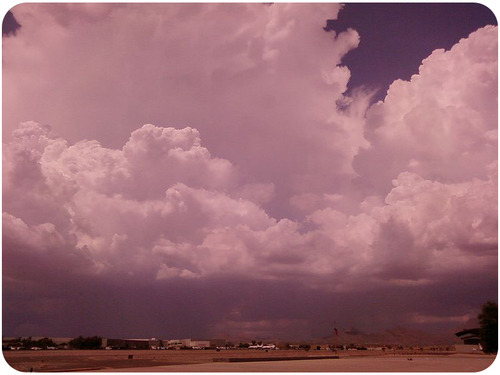 In the southwestern United States relatively cool moist air sucked in from the Gulf of Mexico and the Gulf of California meets air that has been heated by scorching desert temperatures.

The most important monsoon in the world occurs each year over the Indian subcontinent. More than two billion residents of India and southeastern Asia depend on monsoon rains for their drinking and irrigation water. Back in the days of sailing ships, seasonal shifts in the monsoon winds carried goods back and forth between India and Africa.

Chinook winds (or Foehn winds) develop when air is forced up over a mountain range. This takes place, for example, when the westerly winds bring air from the Pacific Ocean over the Sierra Nevada Mountains in California. As the relatively warm, moist air rises over the windward side of the mountains, it cools and contracts. If the air is humid, it may form clouds and drop rain or snow. When the air sinks on the leeward side of the mountains, it forms a high pressure zone. The windward side of a mountain range is the side that receives the wind; the leeward side is the side where air sinks.

The descending air warms and creates strong, dry winds. Chinook winds can raise temperatures more than 20°C (36°F) in an hour and they rapidly decrease humidity. Snow on the leeward side of the mountain disappears melts quickly. If precipitation falls as the air rises over the mountains, the air will be dry as it sinks on the leeward size. This dry, sinking air causes a rainshadow effect (Figure below), which creates many of the world’s deserts. 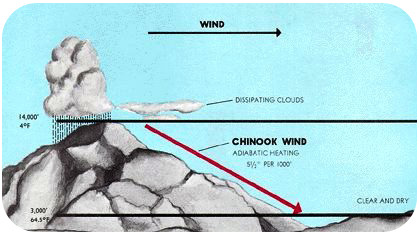 As air rises over a mountain it cools and loses moisture, then warms by compression on the leeward side. The resulting warm and dry winds are Chinook winds. The leeward side of the mountain experiences rainshadow effect.

Santa Ana winds are created in the late fall and winter when the Great Basin east of the Sierra Nevada cools, creating a high pressure zone. The high pressure forces winds downhill and in a clockwise direction (because of Coriolis). The air pressure rises, so temperature rises and humidity falls. The winds blow across the Southwestern deserts and then race downhill and westward toward the ocean. Air is forced through canyons cutting the San Gabriel and San Bernardino mountains (Figure below). 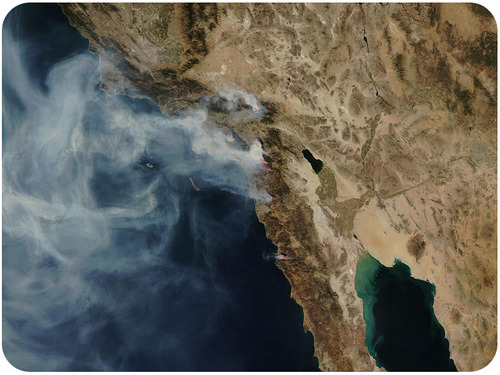 The winds are especially fast through Santa Ana Canyon, for which they are named. Santa Ana winds blow dust and smoke westward over the Pacific from Southern California.

The Santa Ana winds often arrive at the end of California’s long summer drought season. The hot, dry winds dry out the landscape even more. If a fire starts, it can spread quickly, causing large-scale devastation (Figure below). 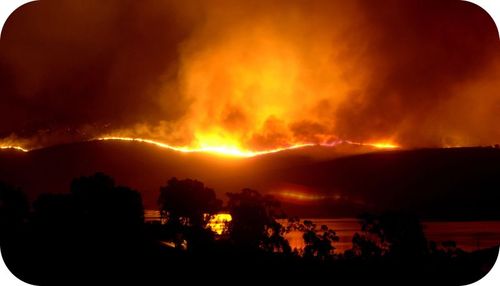 In October 2007, Santa Ana winds fueled many fires that together burned 426,000 acres of wild land and more than 1,500 homes in Southern California.

High summer temperatures on the desert create high winds, which are often associated with monsoon storms. Desert winds pick up dust because there is not as much vegetation to hold down the dirt and sand. (Figure below). A haboob forms in the downdrafts on the front of a thunderstorm. 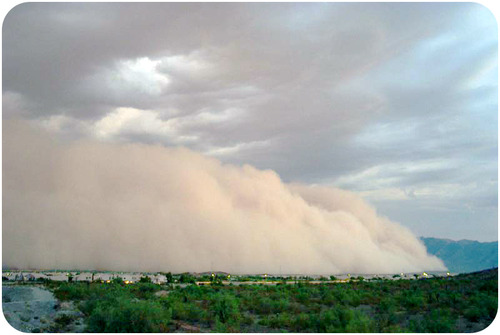 A haboob in the Phoenix metropolitan area, Arizona.

Dust devils, also called whirlwinds, form as the ground becomes so hot that the air above it heats and rises. Air flows into the low pressure and begins to spin. Dust devils are small and short-lived but they may cause damage.

Let’s look at atmospheric circulation in the Northern Hemisphere as a result of the Coriolis Effect (Figure below). Air rises at the equator, but as it moves toward the pole at the top of the troposphere, it deflects to the right. (Remember that it just appears to deflect to the right because the ground beneath it moves.) At about 30°N latitude, the air from the equator meets air flowing toward the equator from the higher latitudes. This air is cool because it has come from higher latitudes. Both batches of air descend, creating a high pressure zone. Once on the ground, the air returns to the equator. This convection cell is called the Hadley Cell and is found between 0° and 30°N. 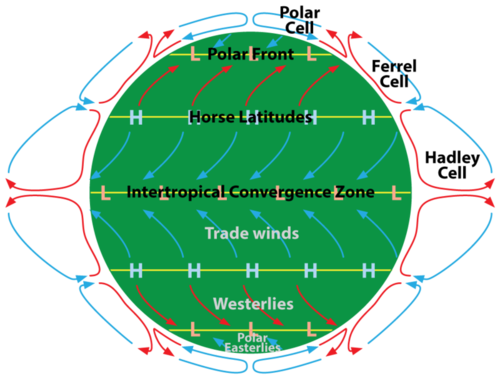 There are two more convection cells in the Northern Hemisphere. The Ferrell cell is between 30°N and 50° to 60°N. This cell shares its southern, descending side with the Hadley cell to its south. Its northern rising limb is shared with the Polar cell located between 50°N to 60°N and the North Pole, where cold air descends.

There are three mirror image circulation cells in the Southern Hemisphere. In that hemisphere, the Coriolis Effect makes objects appear to deflect to the left.

Global winds blow in belts encircling the planet. The global wind belts are enormous and the winds are relatively steady (Figure below). These winds are the result of air movement at the bottom of the major atmospheric circulation cells, where the air moves horizontally from high to low pressure. 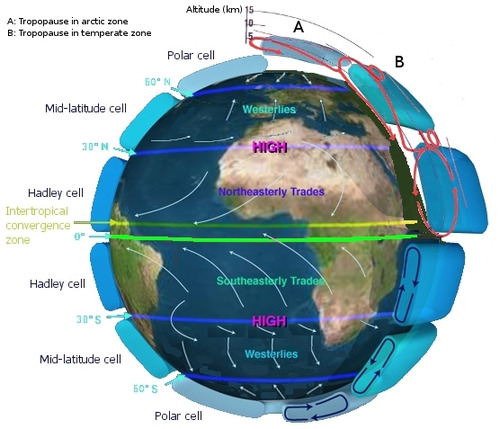 The major wind belts and the directions that they blow.

Let’s look at the global wind belts in the Northern Hemisphere.

The wind belts are named for the directions from which the winds come. The westerly winds, for example, blow from west to east. These names hold for the winds in the wind belts of the Southern Hemisphere as well.

This video lecture discusses the 3-cell model of atmospheric circulation and the resulting global wind belts and surface wind currents (5a): http://www.youtube.com/watch?v=HWFDKdxK75E (8:45).

The polar front is the junction between the Ferrell and Polar cells. At this low pressure zone, relatively warm, moist air of the Ferrell Cell runs into relatively cold, dry air of the Polar cell. The weather where these two meet is extremely variable, typical of much of North America and Europe.

A cross section of the atmosphere with major circulation cells and jet streams. The polar jet stream is the site of extremely turbulent weather.

Jet streams move seasonally just as the angle of the Sun in the sky moves north and south. The polar jet stream, known as “the jet stream,” moves south in the winter and north in the summer between about 30°N and 50° to 75°N.