Human Actions and the Atmosphere

Earth’s atmosphere provides living creatures on the planet with the gases they need for photosynthesis and respiration. In addition, the ozone layer protects organisms from the Sun’s ultraviolet radiation. The importance of the atmosphere for Earth’s life cannot be overestimated yet people also use the atmosphere as a dump for waste gases and particles.

Air pollution started to be a problem when early people burned wood for heat and cooking fires in enclosed spaces such as caves and small tents or houses. But the problems became more widespread as fossil fuels such as coal began to be burned during the Industrial Revolution (Figure below). 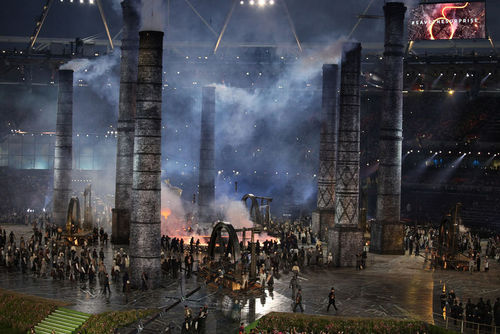 The 2012 Olympic Games in London opening ceremony contained a reenactment of the Industrial Revolution – complete with pollution streaming from smokestacks.

Air pollution became a crisis in the developed nations in the mid-20th century. Coal smoke and auto exhaust combined to create toxic smog that in some places caused lung damage and sometimes death. In Donora, Pennsylvania, in October 1948, 20 people died and 4,000 became ill when coal smoke was trapped by an inversion. In London in December 1952, the “Big Smog” killed 4,000 people over five days. Many thousands more likely died of health complications from the event in the next several months.

Photochemical smog, a different type of air pollution, first became a problem in Southern California after World War II. The abundance of cars and sunshine provided the perfect setting for a chemical reaction between some of the molecules in auto exhaust or oil refinery emissions, and sunshine (Figure below). Photochemical smog consists of more than 100 compounds, most importantly ozone. 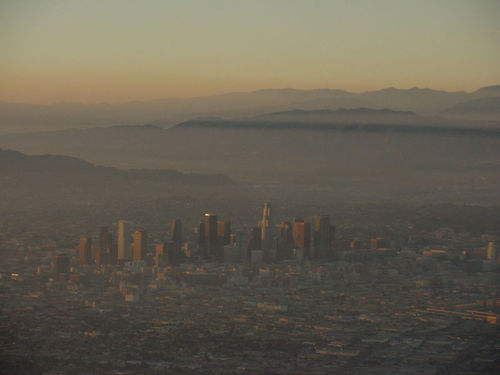 Much of the air pollution seen over Los Angeles is photochemical smog.

The terrible events in Pennsylvania and London, plus the recognition of the hazards of photochemical smog, led to the passage of the Clean Air Act in 1970 in the United States. The act now regulates 189 pollutants. The six most important pollutants regulated by the Act are ozone, particulate matter, sulfur dioxide, nitrogen dioxide, carbon monoxide, and the heavy metal lead. Other important regulated pollutants include benzene, perchloroethylene, methylene chloride, dioxin, asbestos, toluene, and metals such as cadmium, mercury, chromium, and lead compounds.

What is the result of the Clean Air Act? In short, the air in the United States is much cleaner. Visibility is better and people are no longer incapacitated by industrial smog. However, despite the Act, industry, power plants, and vehicles put 160 million tons of pollutants into the air each year. Some of this smog is invisible and some contributes to the orange or blue haze that affects many cities.

Air quality in a region is not just affected by the amount of pollutants released into the atmosphere in that location but by other geographical and atmospheric factors. Winds can move pollutants into or out of a region and a mountain range can trap pollutants on its leeward side. Inversions commonly trap pollutants within a cool air mass. If the inversion lasts long enough, pollution can reach dangerous levels.

Pollutants remain over a region until they are transported out of the area by wind, diluted by air blown in from another region, transformed into other compounds, or carried to the ground when mixed with rain or snow.

Table below lists the smoggiest cities in 2012: nine of the 10 are in California. Why do you think California cities are among those with the worst air pollution?

The state has the right conditions for collecting pollutants including mountain ranges that trap smoggy air, arid and sometimes windless conditions, agriculture, industry, and lots and lots of cars. 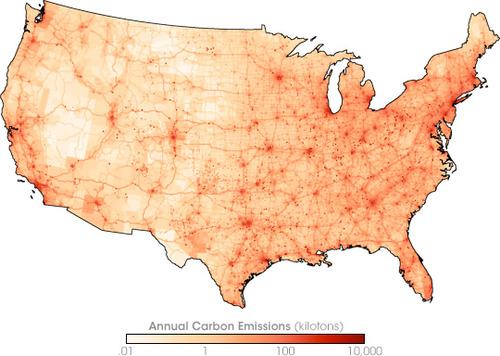 High CO2 levels are found in major metropolitan areas and along the major interstate highways. 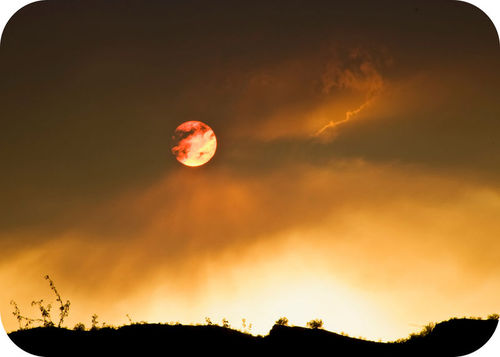 Particulates from a brush fire give the sky a strange glow in Arizona.

Any city can have photochemical smog, but it is most common in sunny, dry locations. A rise in the number of vehicles in cities worldwide has increased photochemical smog. Nitrogen oxides, ozone, and several other compounds are some of the components of this type of air pollution.

Photochemical smog forms when car exhaust is exposed to sunlight. Nitrogen oxides is created by gas combustion in cars and then into the air (Figure below). In the presence of sunshine, the NO2 splits and releases an oxygen ion (O). The O then combines with an oxygen molecule (O2) to form ozone (O3). This reaction can also go in reverse: Nitric oxide (NO) removes an oxygen atom from ozone to make it O2. The direction the reaction goes depends on how much NO2 and NO there is. If NO2 is three times more abundant than NO, ozone will be produced. If nitrous oxide levels are high, ozone will not be created. 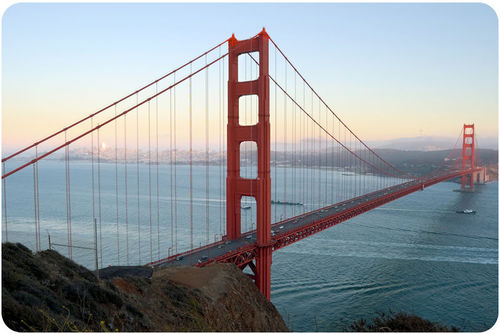 The brown color of the air behind the Golden Gate Bridge is typical of California cities, because of nitrogen oxides.

Ozone is one of the major secondary pollutants. It is created by a chemical reaction that takes place in exhaust and in the presence of sunlight. The gas is acrid-smelling and whitish. Warm, dry cities surrounded by mountains, such as Los Angeles, Phoenix, and Denver, are especially prone to photochemical smog (Figure below). Photochemical smog peaks at midday on the hottest days of summer. Ozone is also a greenhouse gas. 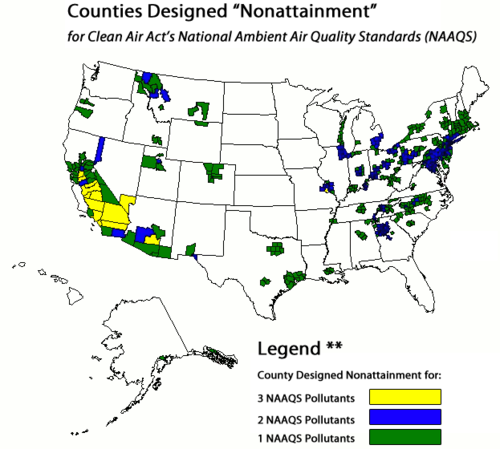 Counties with such high ozone levels that they do not attain federal air quality standards.

Most air pollutants come from burning fossil fuels or plant material. Some are the result of evaporation from human-made materials. Nearly half (49%) of air pollution comes from transportation, 28% from factories and power plants, and the remaining pollution from a variety of other sources.

Fossil fuels are burned in most motor vehicles and power plants. These nonrenewable resources are the power for nearly all manufacturing and other industries. Pure coal and petroleum can burn cleanly and emit only carbon dioxide and water, but most of the time, these fossil fuels do not burn completely and the incomplete chemical reactions produce pollutants. Few sources of these fossil fuels are pure, so other pollutants are usually released. These pollutants include carbon monoxide, nitrogen dioxide, sulfur dioxide, and hydrocarbons.

In large car-dependent cities such as Los Angeles and Mexico City, 80% to 85% of air pollution is from motor vehicles (Figure below). Ozone, carbon monoxide, and nitrous oxides come from vehicle exhaust.

See the relative amounts of CO2 released by different fossil fuels in this animation http://www.nature.nps.gov/GEOLOGY/usgsnps/oilgas/CO2BTU_3.MPG 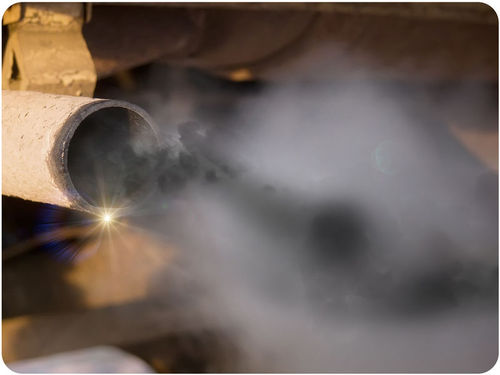 Auto exhaust like this means that the fuels is not burning efficiently.

A few pollutants come primarily from power plants or industrial plants that burn coal or oil (Figure below). Sulfur dioxide (SO2) is a major component of industrial air pollution that is released whenever coal and petroleum are burned. SO2 mixes with H2O in the air to produce sulfuric acid (H2SO4).

Mercury is released when coal and some types of wastes are burned. Mercury is emitted as a gas, but as it cools, it becomes a droplet. Mercury droplets eventually fall to the ground. If they fall into sediments, bacteria convert them to the most dangerous form of mercury: methyl mercury. Highly toxic, methyl mercury is one of the metal’s organic forms. 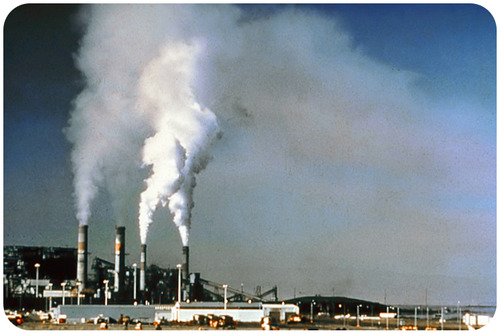 A power plant and its emissions before emission control equipment was added.

The primary way biomass is burned is for slash-and-burn agriculture (Figure below). The rainforest is slashed down and then the waste is burned to clear the land for farming. Biomass from other biomes, such as the savannah, is also burned to clear farmland. The pollutants are much the same as from burning fossil fuels: CO2, carbon monoxide, methane, particulates, nitrous oxide, hydrocarbons, and organic and elemental carbon. Burning forests increases greenhouse gases in the atmosphere by releasing the CO2 stored in the biomass and also by removing the forest so that it cannot store CO2 in the future. As with all forms of air pollution, the smoke from biomass burning often spreads far and pollutants can plague neighboring states or countries. 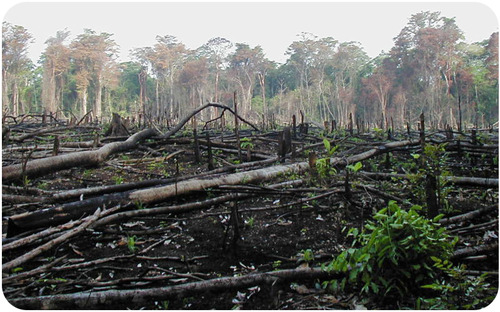 A forest that has been slash-and-burned to make new farmland.

Particulates result when anything is burned. About 40% of the particulates that enter the atmosphere above the United States are from industry and about 17% are from vehicles. Particulates also occur naturally from volcanic eruptions or windblown dust. Like other pollutants, they travel all around the world on atmospheric currents.

Volatile organic compounds (VOCs) enter the atmosphere by evaporation. VOCs evaporate from human-made substances, such as paint thinners, dry cleaning solvents, petroleum, wood preservatives, and other liquids. Naturally occurring VOCs evaporate off of pine and citrus trees. The atmosphere contains tens of thousands of different VOCs, nearly 100 of which are monitored. The most common is methane, a greenhouse gas (Figure below). Methane occurs naturally, but human agriculture is increasing the amount of methane in the atmosphere.

Methane forms when organic material decomposes in an oxygen-poor environment. In the top image, surface methane production is shown. Stratospheric methane concentrations in the bottom image show that methane is carried up into the stratosphere by the upward flow of air in the tropics.