Historical geologists study Earth’s past to understand what happened and when it happened. Paleontologists do the same thing, but with an emphasis on the history of life, especially as it is understood from fossils. Despite having very little material from those days, scientists have many ways of learning about the early Earth.

Earth came together (accreted) from the cloud of dust and gas known as the solar nebula nearly 4.6 billion years ago, the same time the Sun and the rest of the solar system formed. Gravity caused small bodies of rock and metal orbiting the proto-Sun to smash together to create larger bodies. Over time, the planetoids got larger and larger until they became planets. More information about planet formation is in the chapter about the solar system.

There is little hard evidence for scientists to study from Earth’s earliest days. Much of what scientists know about the early Earth come from three sources: (1) zircon crystals, the oldest materials found on Earth, which show that the age of the earliest crust formed at least 4.4 billion years ago; (2) meteorites that date from the beginning of the solar system, to nearly 4.6 billion years ago (Figure below); and (3) lunar rocks, which represent the early days of the Earth-Moon system as far back as 4.5 billion years ago. 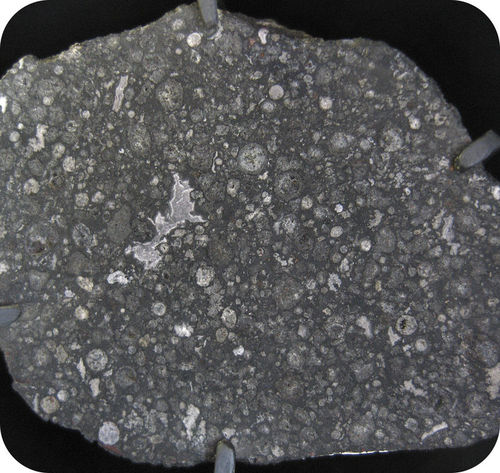 The Allende Meteorite is a carbonaceous chondrite that struck Earth in 1969. The calcium-aluminum-rich inclusions are fragments of the earliest solar system.

When Earth first came together it was really hot, hot enough to melt the metal elements that it contained. Why was the early Earth so hot?

When Earth was entirely molten, gravity drew denser elements to the center and lighter elements rose to the surface. The separation of Earth into layers based on density is known as differentiation. The densest material moved to the center to create the planet’s dense metallic core. Materials that are intermediate in density became part of the mantle (Figure below). 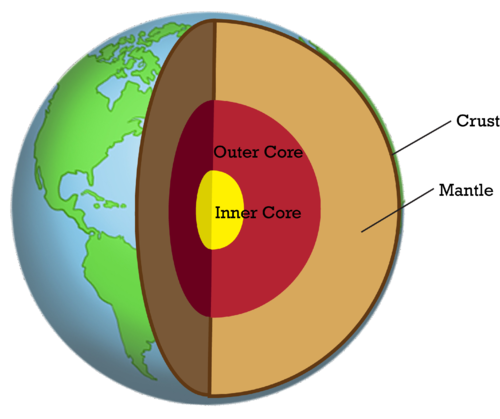 Lighter materials accumulated at the surface of the mantle to become the earliest crust. The first crust was probably basaltic, like the oceanic crust is today. Intense heat from the early core drove rapid and vigorous mantle convection so that crust quickly recycled into the mantle. The recycling of basaltic crust was so effective that no remnants of it are found today.

How the Moon Formed

One of the most unique features of planet Earth is its large Moon. Unlike the only other natural satellites orbiting an inner planet, those of Mars, the Moon is not a captured asteroid. Understanding the Moon’s birth and early history reveals a great deal about Earth’s early days.

To determine how the Moon formed, scientists had to account for several lines of evidence:

Can you devise a “birth story” for the Moon that takes all of these bits of data into account?

Astronomers have carried out computer simulations that are consistent with these facts and have detailed a birth story for the Moon. A little more than 4.5 billion years ago, roughly 70 million years after Earth formed, planetary bodies were being pummeled by asteroids and planetoids of all kinds. Earth was struck by a Mars-sized asteroid (Figure below). 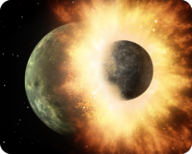 An artist’s depiction of the impact that produced the Moon.

The tremendous energy from the impact melted both bodies. The molten material mixed up. The dense metals remained on Earth but some of the molten, rocky material was flung into an orbit around Earth. It eventually accreted into a single body, the Moon. Since both planetary bodies were molten, material could differentiate out of the magma ocean into core, mantle, and crust as they cooled. Earth’s fast spin is from energy imparted to it by the impact. 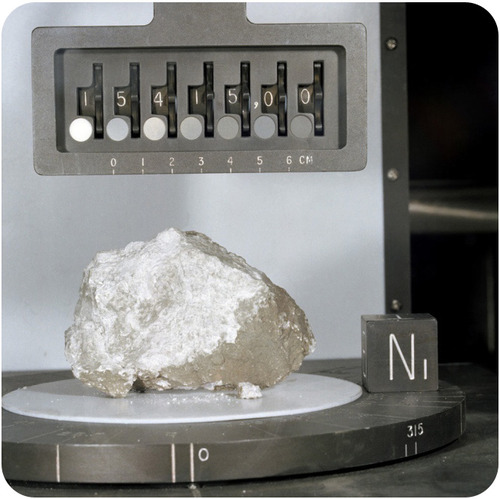 The Genesis Rock was brought back to Earth by the Apollo 15 astronauts.

Lunar rocks reveal an enormous amount about Earth’s early days. The Genesis Rock, with a date of 4.5 billion years, is only about 100 million years younger than the solar system (Figure above). The rock is a piece of the Moon’s anorthosite crust, which was the original crust. Why do you think Moon rocks contain information that is not available from Earth’s own materials?

More information about the Genesis Rock from NASA is found here: http://www.nasa.gov/mission_pages/LRO/news/image_release042310.html.

Can you find how all of the evidence presented in the bullet points above is present in the Moon’s birth story?

At first, Earth did not have an atmosphere or free water since the planet was too hot for gases and water to collect. The atmosphere and oceans that we see today evolved over time.

Earth’s first atmosphere was made of hydrogen and helium, the gases that were common in this region of the solar system as it was forming. Most of these gases were drawn into the center of the solar nebula to form the Sun. When Earth was new and very small, the solar wind blew off atmospheric gases that collected. If gases did collect, they were vaporized by impacts, especially from the impact that brought about the formation of the Moon.

Eventually things started to settle down and gases began to collect. High heat in Earth’s early days meant that there were constant volcanic eruptions, which released gases from the mantle into the atmosphere (Figure below). Just as today, volcanic outgassing was a source of water vapor, carbon dioxide, small amounts of nitrogen, and other gases. 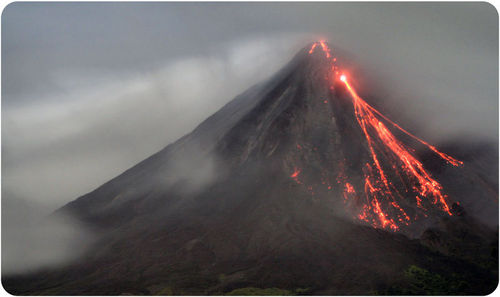 Scientists have calculated that the amount of gas that collected to form the early atmosphere could not have come entirely from volcanic eruptions. Frequent impacts by asteroids and comets brought in gases and ices, including water, carbon dioxide, methane, ammonia, nitrogen, and other volatiles from elsewhere in the solar system (Figure below). 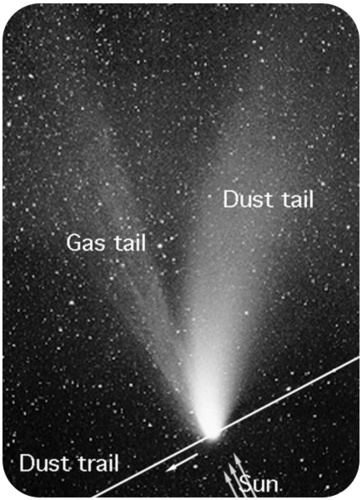 The gases that create a comet’s tail can become part of the atmosphere of a planet.

Calculations also show that asteroids and comets cannot be responsible for all of the gases of the early atmosphere, so both impacts and outgassing were needed.

The second atmosphere, which was the first to stay with the planet, formed from volcanic outgassing and comet ices. This atmosphere had lots of water vapor, carbon dioxide, nitrogen, and methane but almost no oxygen. Why was there so little oxygen? Plants produce oxygen when they photosynthesize but life had not yet begun or had not yet developed photosynthesis. In the early atmosphere, oxygen only appeared when sunlight split water molecules into hydrogen and oxygen and the oxygen accumulated in the atmosphere.

Without oxygen, life was restricted to tiny simple organisms. Why is oxygen essential for most life on Earth?

1. Oxygen is needed to make ozone, a molecule made of three oxygen ions, O3. Ozone collects in the atmospheric ozone layer and blocks harmful ultraviolet radiation from the Sun. Without an ozone layer, life in the early Earth was almost impossible.

2. Animals need oxygen to breathe. No animals would have been able to breathe in Earth’s early atmosphere.

The early atmosphere was rich in water vapor from volcanic eruptions and comets. When Earth was cool enough, water vapor condensed and rain began to fall. The water cycle began. Over millions of years enough precipitation collected that the first oceans could have formed as early as 4.2 to 4.4 billion years ago. Dissolved minerals carried by stream runoff made the early oceans salty. What geological evidence could there be for the presence of an early ocean? Marine sedimentary rocks can be dated back about 4 billion years. By the Archean, the planet was covered with oceans and the atmosphere was full of water vapor, carbon dioxide, nitrogen, and smaller amounts of other gases.