Humans have long dreamed of traveling into space. Greek mythology tells of Daedelus and Icarus, a father and son who took flight using wings made of feathers and wax (Figure below). Icarus, thrilled with the feel of flying, got too close to the Sun, the wax melted, and he fell into the sea. In a time before airplanes and hot air balloons, we can relate to the excitement Icarus would have felt. Much later, science fiction writers, such as Jules Verne (1828–1905) and H.G. Wells (1866–1946), wrote about technologies that explore the dream of traveling beyond Earth into space.

Humans did not reach space until the second half of the 20th century. However, the main technology that makes space exploration possible, the rocket, has been around for a long time. A rocket is propelled by particles flying out of one end at high speed. We do not know who built the first rocket, or when, but there are records of the Chinese using rockets in war against the Mongols as early as the 13th century. The Mongols then spread rocket technology in their attacks on Eastern Europe. Early rockets were also used to launch fireworks and for other ceremonial purposes.

Rockets were used for centuries before anyone could explain exactly how they worked. The theory to explain rockets did not arrive until 1687, when Isaac Newton (1643–1727) described the three basic laws of motion, now referred to as Newton’s Laws of Motion:

Newton’s third law of motion is particularly useful in explaining how a rocket works. To better understand this law, consider the skate boarder in (Figure below).

Since space is a vacuum, how does a rocket work if there is nothing for the rocket to push against? A rocket in space moves like the skater holding the fire extinguisher. Fuel is ignited in a chamber, which causes an explosion of gases. The explosion creates pressure that forces the gases out of the rocket. As these gases rush out the end, the rocket moves in the opposite direction, as predicted by Newton’s Third Law of Motion (Figure below). The reaction force of the gases on the rocket pushes the rocket forward. The force pushing the rocket is called thrust. 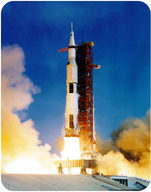 Explosions in a chamber create pressure that pushes gases out of a rocket. This in turn produces thrust that pushes the rocket forward. The rocket shown here is a Saturn V rocket, used for the Apollo 11 mission – the first to carry humans to the Moon.

For centuries, rockets were powered by gunpowder or other solid fuels and could travel only fairly short distances. At the end of the 19th century and the beginning of the 20th century, several breakthroughs in rocketry led to rockets that were powerful enough to carry the rockets—and humans—beyond Earth. During this period, three people independently came up with similar ideas for improving rocket design.

The first person to establish many of the main ideas of modern rocketry was a Russian schoolteacher, named Konstantin Tsiolkovsky (1857–1935). Most of his work was done before the first airplane flight, which took place in 1903. Tsiolkovsky realized that in order for rockets to have enough power to escape Earth’s gravity, they would need liquid fuel instead of solid fuel. He also realized that it was important to find the right balance between the amount of fuel a rocket uses and how heavy the rocket is. He came up with the idea of using multiple stages when launching rockets, so that empty fuel containers would drop away to reduce mass. Tsiolkovsky had many great ideas and designed many rockets, but he never built one.

The second great rocket pioneer was an American, Robert Goddard (1882–1945). Goddard independently came up with using liquid fuel and using multiple stages for rockets. He also designed a system for cooling the gases escaping from a rocket, which made the rocket much more efficient. Goddard built rockets to test his ideas, such as the first rocket to use liquid fuel (Figure below). Over a lifetime of research, Goddard came up with many innovations that are still used in rockets today. 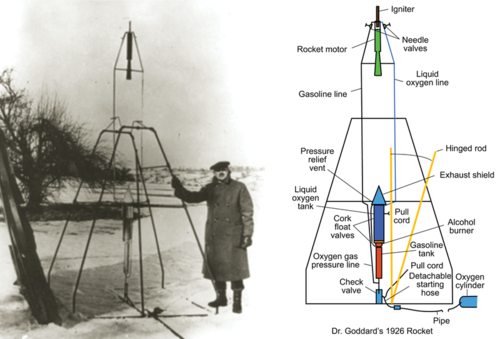 The third great pioneer of rocket science was a Romanian-born German, named Hermann Oberth (1894–1989). In the early 1920’s, Oberth came up with many of the same ideas as Tsiolkovsky and Goddard. Oberth built a liquid-fueled rocket, which he launched in 1929. Later, he joined a team of scientists that designed the rocket shown in (Figure below) for the German military. This rocket played a major role in World War II. The Germans used the V-2 as a missile to bomb numerous targets in Belgium, England, and France. In 1942, the V-2 was launched to an altitude of 176 km (109 miles), making it the first human-made object to travel into space (an altitude of 100 km (62 miles).

Explosions in a chamber create pressure that pushes gases out of the rocket. This in turn produces thrust that pushes the rocket forward.

The leader of the V-2 team was a German scientist named Wernher von Braun. von Braun later fled Germany and came to the United States, where he helped the United States develop missile weapons. He then joined NASA to design rockets for space travel including the Saturn V rocket (Figure below), which was eventually used to send the first men to the Moon. 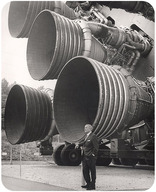 One of the first uses of rockets in space was to launch satellites. A satellite is an object that orbits a larger object. An orbit is a circular or elliptical path around an object. The Moon was Earth’s first satellite, but now many human-made artificial satellites orbit the planet.

Isaac Newton also developed the theory that explains why satellites stay in orbit. Newton’s law of universal gravitation describes how every object in the universe is attracted to every other object. The same gravity that makes an apple fall to the ground and keeps a person from floating away into the sky, also holds the Moon in orbit around Earth, and Earth in orbit around the Sun.

Newton used the following example to explain how gravity makes orbits possible. Consider a cannonball launched from a high mountain (Figure below). 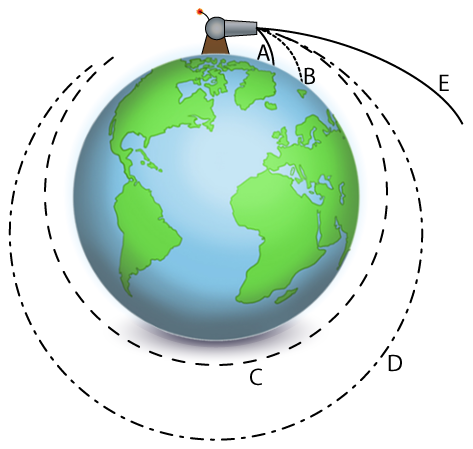 Not that Newton’s idea would actually work in real life: A cannonball launched from Mt. Everest would burn up in the atmosphere if launched at the speed required to put it into orbit. However, a rocket can launch straight up, then steer into an orbit. A rocket can also carry a satellite above the atmosphere and then release the satellite into orbit. 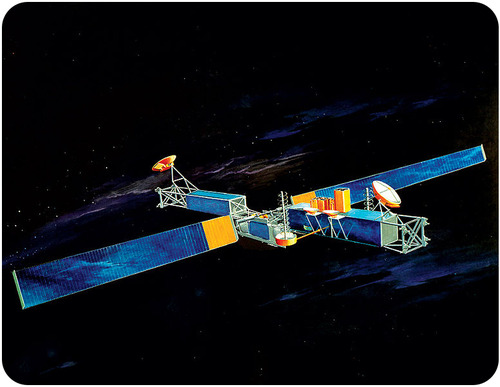 This is a Milstar communications satellite used by the U.S. military. The long, flat solar panels provide power for the satellite. The antennas are for sending or receiving signals.

The speed of a satellite depends on how high it is above the object it is orbiting (Figure below). Satellites that are relatively close to Earth are said to be in low Earth orbit (LEO). Satellites in LEO are often in polar orbit; they orbit over the North and South Poles, perpendicular to Earth’s spin. Because Earth rotates underneath the orbiting satellite, a satellite in polar orbit is over a different part of Earth’s surface each time it circles. Imaging satellites and weather satellites are often put in low-Earth, polar orbits. 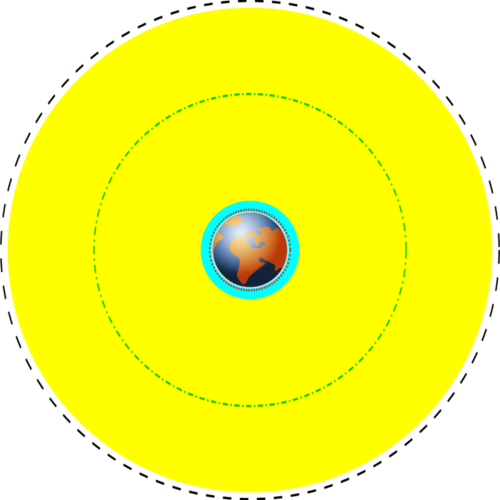 An animation of roughly half the orbit of the ISS from sunrise to sunset: http://en.wikipedia.org/wiki/File:Sunrise_To_Sunset_Aboard_The_ISS.OGG

From the end of World War II in 1945 to the breakup of the Soviet Union (USSR) in 1991, the Soviet Union and the United States were in a military, social, and political conflict, known as the Cold War. Although there were very few actual military confrontations, each of the two countries was in an arms race — continually developing new and more powerful weapons to try to best the other. While the arms race had many social and political consequences, it helped to drive technology. For example, the development of missiles during the Cold War significantly sped up the development of rocket technologies.

More information about the Space Race can be found at http://www.nasm.si.edu/exhibitions/gal114/gal114.htm.

On October 4, 1957, the USSR launched the first artificial satellite ever put into orbit. Sputnik 1 (Figure below) was 58 cm in diameter and weighed 84 kg (184 lb). Antennas trailing behind the satellite sent out radio signals, which were detected by scientists and amateur radio operators around the world. Sputnik 1 orbited in an LEO on an elliptical path every 96 minutes. After about 3 months, the satellite slowed down enough to descend into Earth’s atmosphere where it burned up as a result of friction. 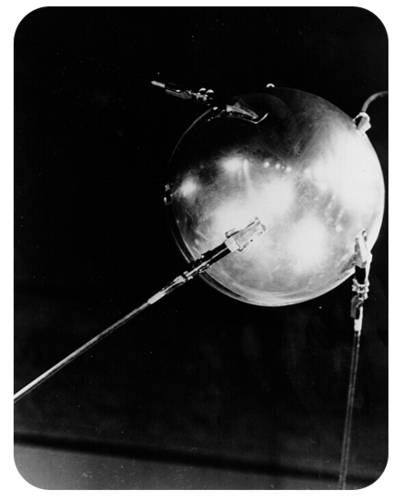 The launch of Sputnik 1 triggered the Space Race between the USSR and the United States. Many Americans were shocked that the Soviets had the technology to put a satellite in orbit, and they worried that the Soviets might also be winning the arms race. On November 3, 1957, the Soviets launched Sputnik 2, which carried the first animal to go into orbit—a dog named Laika (Figure below). 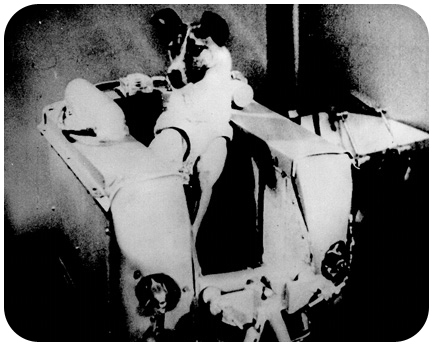 Laika was a stray trained for space flight. No one yet knew how to bring a satellite out of orbit and Laika was not expected to survive the flight.

The Race Is On

In response to the Sputnik program, the United States launched its first satellite, Explorer I, on January 31, 1958, and its second, Vanguard 1, on March 17, 1958. Later that year, the U.S. Congress and President Eisenhower established NASA.

The Space Race reached a peak in 1969 when the United States put the first human on the Moon. However, the competition between the two countries’ space programs continued for many more years.

On May 25, 1961, shortly after the first American went into space, President John F. Kennedy presented the following challenge to the U.S. Congress (Figure below): 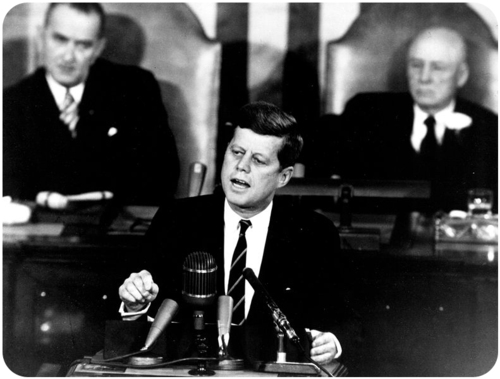 “I believe that this nation should commit itself to achieving the goal, before this decade is out, of landing a man on the Moon and returning him back safely to the Earth. No single space project in this period will be more impressive to mankind, or more important for the long-range exploration of space; and none will be so difficult or expensive to accomplish.” 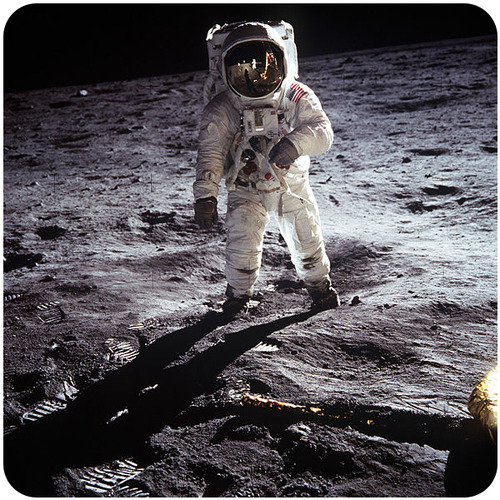 Neil Armstrong took this photo of Buzz Aldrin on the Moon during the Apollo 11 mission. Armstrong and the Lunar Module can be seen in the reflection in Aldrin’s helmet.

Following the Apollo 11 mission, four other American missions successfully put astronauts on the Moon. The last manned mission to the moon was Apollo 17, which landed on December 11, 1972. To date, no other country has put a person on the Moon.

In July 1975, the USSR and the United States carried out a joint mission called the Apollo-Soyuz Test Project. During the mission, an American Apollo spacecraft docked with a Soviet Soyuz spacecraft (Figure below).

The docking of an Apollo spacecraft with a Soyuz spacecraft in 1975. Many considered this to be the symbolic end of the Space Race.

Both the United States and the USSR sent probes to other planets during the Space Race. A space probe is a an unmanned spacecraft that is sent to collect data by flying near or landing on an object in space, such as a planet, moon, asteroid, or comet. During the Venera missions, the USSR sent several probes to Venus, including some that landed on the surface. The United States sent probes to Mercury, Venus, and Mars in the Mariner missions (Figure below), and landed two probes on Mars in the Viking missions. 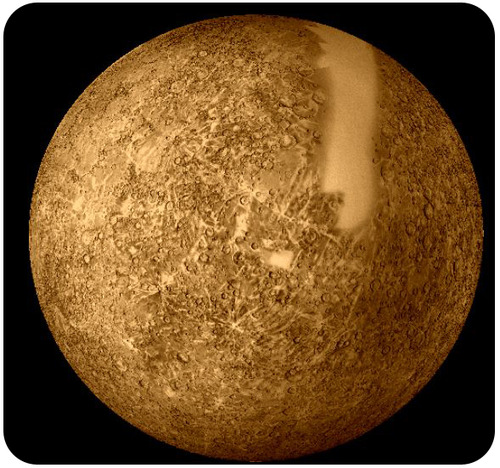 Data from Mariner 10 was used to create this image of Mercury.

In the Pioneer and Voyager missions, the United States also sent probes to the outer solar system, including flybys of Jupiter, Saturn, Uranus, and Neptune. The Pioneer and Voyager probes are still traveling, and are now beyond the edges of our solar system. We have lost contact with the two Pioneer probes, but expect to have contact with the two Voyager probes until at least 2020 (Figure below).

A portrait of the solar system more than 4 billion miles from Earth was taken by Voyager I. The pale blue dot halfway down the brown band on the right side is Earth.

As of late 2012, Voyager 1 was about 11 billion miles from Earth. The spacecraft was about to leave the Sun’s influence and enter interstellar space.