An ecosystem is made up of the living creatures and the nonliving things that those creatures need within an area. Energy moves through an ecosystem in one direction. Nutrients cycle through different parts of the ecosystem and can enter or leave the ecosystem at many points.

A population consists of all individuals of a single species that occur together at a given place and time. A species is a single type of organism that can interbreed and produce fertile offspring. All of the populations living together in the same area make up a community. An ecosystem is all of the living things in a community and the physical and chemical factors that they interact with.

(a) The horsetail Equisetum is a primitive plant. (b) Insects are among the many different types of invertebrates. (c) A giraffe is an example of a vertebrate.

Physical and chemical features are abiotic factors. Abiotic factors include resources living organisms need such as light, oxygen, water, carbon dioxide, good soil, and nitrogen, phosphorous, and other nutrients. Abiotic factors also include environmental features that are not materials or living things, such as living space and the right temperature range.

Organisms must make a living, just like a lawyer or a ballet dancer. This means that each individual organism must acquire enough food energy to live and reproduce. A species’ way of making a living is called its niche. An example of a niche is making a living as a top carnivore, an animal that eats other animals, but is not eaten by any other animals (Figure below). Every species fills a niche, and niches are almost always filled in an ecosystem. 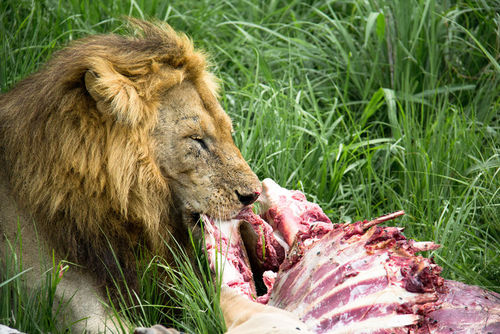 The top carnivore niche is filled by lions on the savanna, wolves in the tundra, and tuna in the oceans.

An organism’s habitat is where it lives (Figure below). The important characteristics of a habitat include climate, the availability of food, water, and other resources, as well as other factors, such as weather.

Birds living in a saguaro cactus. A habitat may be a hole in a cactus or the underside of a fern in a rainforest. It may be rocks and the nearby sea.

There are many different types of ecosystems, some of which were described in the biomes discussion in the Climate chapter (Figure below). As with biomes, climate conditions determine which ecosystems are found in which location. A particular biome encompasses all of the ecosystems that have similar climate and organisms. 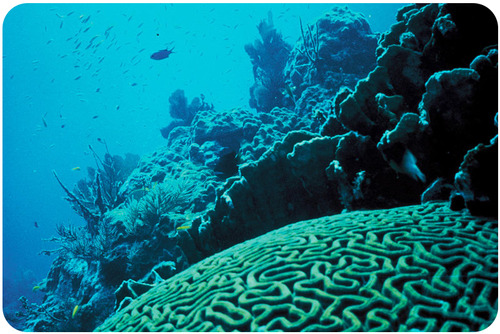 Different organisms live in each different type of ecosystems. Lizards thrive in deserts, but no reptiles can survive at all in polar ecosystems. Large animals generally do better in cold climates than in hot climates.

Organisms that use the food energy that was created by producers are named consumers. There are many types of consumers. 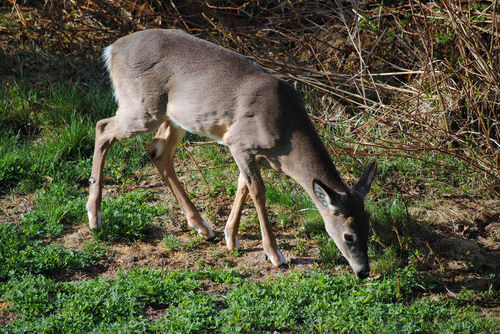 There are many types of feeding relationships (Figure below) between organisms: predators that feed on prey, scavengers, and decomposers.

(a) A predator is an animal that kills and eats another animal, known as its prey. (b) Scavengers are animals, such as vultures and hyenas, that eat organisms that are already dead. (c) Decomposers break apart dead organisms or the waste material of living organisms, returning the nutrients to the ecosystem. Bacteria and fungi are decomposers.

Flow of Energy in Ecosystems 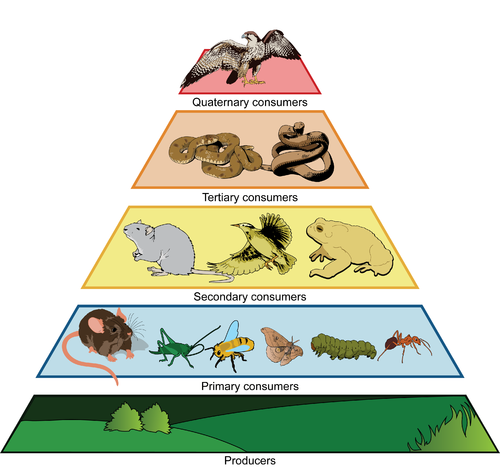 A simple food chain in a lake. The producers, algae, are not shown. For the predatory bird at the top, how much of the original energy is left? 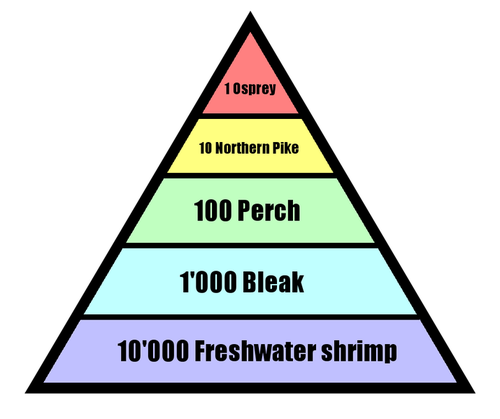 What are the consequences of the loss of energy at each trophic level? Each trophic level can support fewer organisms. How many osprey are there relative to the number of shrimp?

What does this mean for the range of the osprey (or lion, or other top predator)? A top predator must have a very large range in which to hunt so that it can get enough energy to live.

Why do most food chains have only four or five trophic levels? There is not enough energy to support organisms in a sixth trophic level. Food chains of ocean animals are longer than those of land-based animals because ocean conditions are more stable. 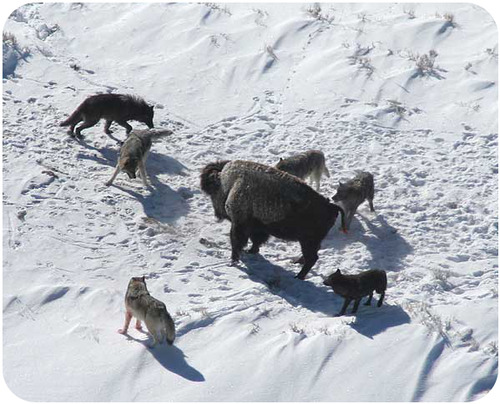 In this image the predators (wolves) are smaller than the prey (bison), which goes against the rule placed above. How does this relationship work? Many wolves are acting together to take down the bison.

What is a more accurate way to depict the passage of energy in an ecosystem? A food web (Figure below) recognizes that many organisms eat at multiple trophic levels. 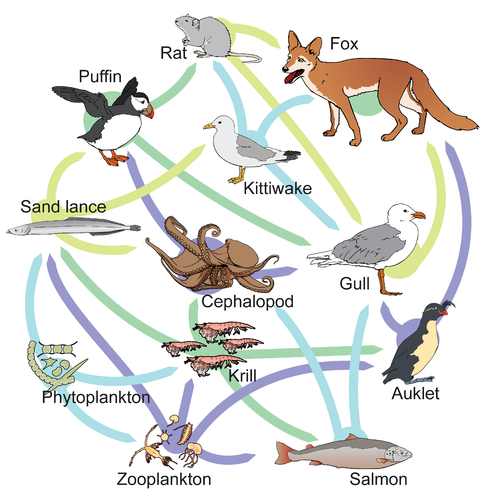 A food web includes the relationships between producers, consumers, and decomposers.

Even food webs are interconnected. All organisms depend on two global food webs. The base of one is phytoplankton and the other is land plants. How are these two webs interconnected? Birds or bears that live on land may eat fish, which connects the two food webs.

Where do humans fit into these food webs? Humans are an important part of both of these food webs; we are at the top of a food web since nothing eats us. That means that we are top predators.

Flow of Matter in Ecosystems

Nutrients are ions that are crucial to the growth of living organisms. Nutrients – such as nitrogen and phosphorous – are important for plant cell growth. Animals use silica and calcium to build shells and skeletons. Cells need nitrates and phosphates to create proteins and other biochemicals. From nutrients, organisms make tissues and complex molecules such as carbohydrates, lipids, proteins, and nucleic acids. 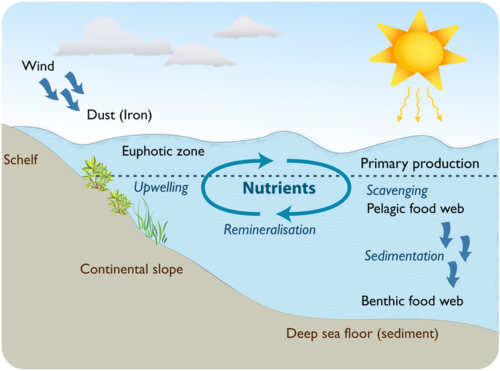 Decomposers play a key role in making nutrients available to organisms. Decomposers break down dead organisms into nutrients and carbon dioxide, which they respire into the air. If dead tissue would remain as it is, eventually nutrients would run out. Without decomposers, life on earth would have died out long ago.

Species have different types of relationships with each other. Competition occurs between species that try to use the same resources. When there is too much competition, one species may move or adapt so that it uses slightly different resources. It may live at the tops of trees and eat leaves that are somewhat higher on bushes, for example. If the competition does not end, one species will die out. Each niche can only be inhabited by one species. Some relationships between species are beneficial to at least one of the two interacting species. These relationships are known as symbiosis and there are three types:

Choose which type of relationship is described by each of the images and caption in the Figure below.

(a) The pollinator gets food; the plant’s pollen gets caught in the bird’s feathers so it is spread to far away flowers. (b) The barnacles receive protection and get to move to new locations; the whale is not harmed. (c) These tiny mites are parasitic and consume the insect called a harvestman.