Minerals are made up of different chemical elements bound together. Understanding mineral chemistry aids in understanding how minerals form and why they have certain properties.

An introduction to the atom is seen on this Khan Academy video: http://www.khanacademy.org/video/introduction-to-the-atom. 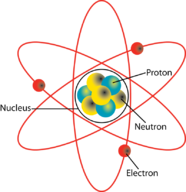 Major parts of an atom, although the electrons are more accurately represented in a cloud. What chemical element is this? (Hint: 3 protons, 3 electrons)

Because electrons are minuscule compared with protons and neutrons, the number of protons plus neutrons gives the atom its atomic mass. All atoms of a given element always have the same number of protons but may differ in the number of neutrons found in its nucleus. Atoms of an element with differing numbers of neutrons are called isotopes. For example, carbon always has 6 protons but may have 6, 7, or 8 neutrons. This means there are three isotopes of carbon: carbon-12, carbon-13, and carbon-14. How many protons and neutrons make up carbon-12? Carbon-13? Carbon-14?

For a funny view of the chemical elements, check out this Tom Lehrer song: http://www.youtube.com/watch?v=GFIvXVMbII0.

Electron orbitals are described in this Khan Academy video: http://www.khanacademy.org/video/orbitals.

When atoms chemically bond, they form compounds. The smallest unit of a compound with all the properties of that compound is a molecule. When two or more atoms share electrons to form a chemical bond, they form a molecule. The molecular mass is the sum of the masses of all the atoms in the molecule.

A video about chemical bonding, also from Khan Academy: http://www.khanacademy.org/video/ionic–covalent–and-metallic-bonds.

Hydrogen and oxygen share electrons to form water, which is a covalently bonded, polar molecule. Watch this animation to see how it forms: http://www.youtube.com/watch?v=qmgE0w6E6ZI. 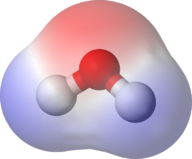