Even since the end of the Space Race, space exploration has continued. Humans have a presence in space at the International Space Station, and the Russian space station, Mir.

While the United States continued missions to the Moon in the early 1970s, the Soviets had another goal: to build a space station. A space station is a large spacecraft on which humans can live for extended periods.

The Soviet Union put the first space station, Salyut 1, into orbit on April 19, 1971, with no crew. On June 7, 1971, three cosmonauts boarded the station and stayed for 22 days. Unfortunately, the cosmonauts died during their return to Earth and Salyut 1 left orbit and burned up in the Earth’s atmosphere later that year.

Between 1971 and 1982, the Soviets put a total of seven Salyut space stations into orbit (Figure below). Several of the stations were used to study the problems of living in space and for a variety of experiments in astronomy, biology, and Earth science. 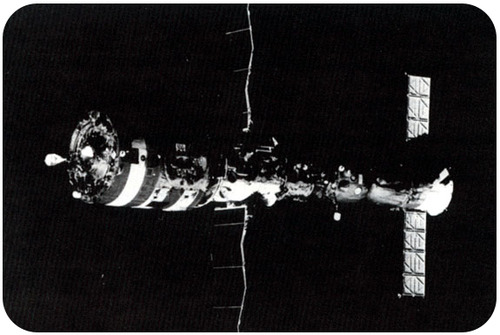 Salyut 6 and Salyut 7 each had two docking ports, so a crew could dock a spacecraft to one end, and a replacement crew could dock to the other end. This Soviet Salyut 7 space station was in orbit from 1982 to 1991.

The United States only launched one space station during this time. In May 1973, Skylab was launched (Figure below). Three crews visited Skylab, all within its first year in orbit. Skylab was used to study the effects on humans of staying in space for long periods, and was used for studying the Sun.

More about Skylab can be found at http://starchild.gsfc.nasa.gov/docs/StarChild/space_level2/skylab.html. 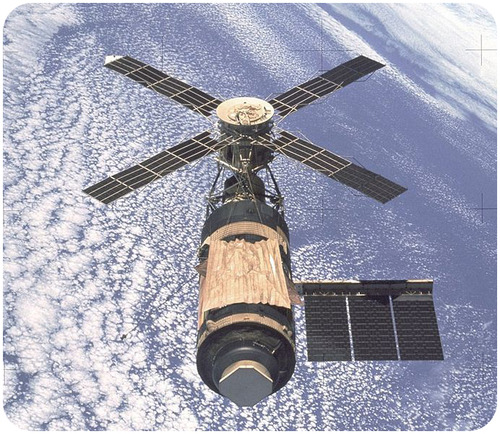 This image of Skylab was taken as the last crew left the station in January of 1974.

The first space station designed for long-term use was the Mir space station (Figure below). Mir was a modular space station. The USSR launched Mir’s core in 1986 and the station was put together in several phases over the next decade. Mir holds the current record for the longest continuous occupation (although not by the same astronauts), nearly 10 years. Mir was taken out of orbit in 2001 and fell into the Pacific Ocean, as planned. 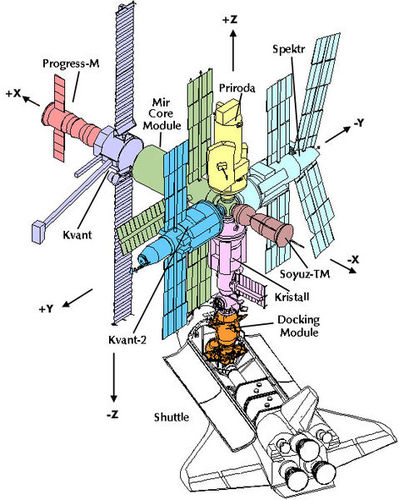 The Soviet/Russian space station Mir was designed to have several different parts attached to a core.

Early space exploration was driven by competition between the United States and the USSR. However, since the end of the Cold War, space technology and space exploration have benefited from a spirit of cooperation. In 1993, the United States and Russia announced American involvement in Mir and plans for what became the International Space Station (ISS). Space shuttles would transport supplies and people to and from Mir, and American astronauts would live on Mir for many months. This cooperation allowed the United States to learn from Russia’s experience with long-duration space flights. (Figure below) shows Mir with an American space shuttle attached. 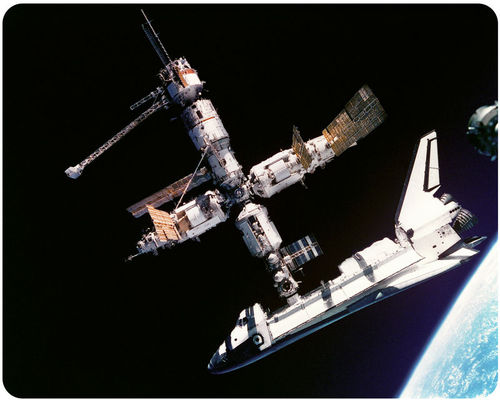 Russian cosmonauts took this photograph from their Soyuz spacecraft as they flew around Mir and the ISS.

The first piece of the ISS was launched in 1997 and it has been constructed piece by piece over time since then. It is a large station with many different sections. The station has had people on board since the first crew arrived in 2000. American space shuttles transport most of the supplies and equipment to the station, while Russian Soyuz spacecraft carry people. The primary purpose of the station is scientific research, especially in biology, medicine, and physics. 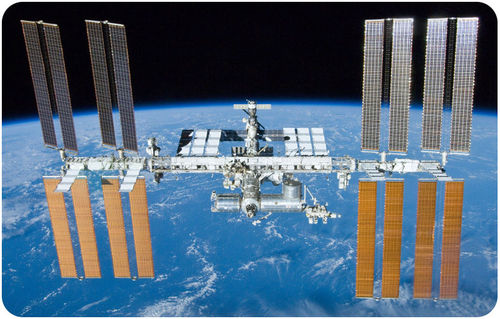 A photograph of the International Space Station was taken from the space shuttle Atlantis in June 2007. Construction of the station was completed in 2011.

Although the spacecraft used for the Apollo missions were very successful, they were also very expensive, could not carry much cargo, and could be used only once. NASA wanted a new kind of space vehicle, one that was reusable and able to carry large pieces of equipment, such as satellites, space telescopes, or sections of a space station. The resulting spacecraft was a space shuttle, shown in (Figure below), and there have been five — Columbia, Challenger, Discovery, Atlantis, and Endeavor. The Soviet Union built a similar shuttle called Buran, but it never flew a mission with humans aboard.

Atlantis on the launch pad in 2006. Since 1981, the space shuttle has been the United States’ primary vehicle for carrying people and large equipment into space.

A space shuttle has three main parts. The part you are probably most familiar with is the orbiter, with wings like an airplane. When a space shuttle launches, the orbiter is attached to a huge fuel tank that contains liquid fuel. On the sides of the fuel tank are two large booster rockets.

(Figure below) shows the stages of a normal space shuttle mission. The launch takes place at Cape Canaveral in Florida. The booster rockets provide extra power to get the orbiter out of Earth’s atmosphere. When they are done, they parachute down into the ocean so they can be recovered and used again. When the fuel tank is empty, it also falls away, but it burns up in the atmosphere. Once in space, the orbiter can be used to release equipment, such as a satellite, or supplies to the International Space Station, or to repair existing equipment such as the Hubble Space Telescope, or to do experiments directly on board the orbiter. 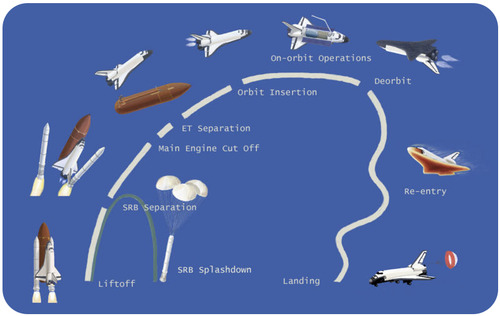 In a typical space shuttle mission, the orbiter takes off like a rocket and lands like an airplane.

When the mission is complete, the orbiter re-enters Earth’s atmosphere. As it passes through the atmosphere, the outside of the orbiter heats up to over 1,500oC. The rockets do not fire during re-entry, so the shuttle is more like a glider than an airplane. Pilots have to steer the shuttle to the runway very precisely. Space shuttles usually land at Kennedy Space Center in Cape Canaveral, Florida, or at Edwards Air Force Base in California. However, if weather is bad at both these landing sites, a shuttle can land at one of many backup sites around the world and then hauled back to Florida on the back of a jet airplane.

To further understand how space shuttles work, check out http://science.howstuffworks.com/space-shuttle.htm.

The space shuttle program has been very successful. Space shuttles have made possible many scientific discoveries and other great achievements in space. However, the program has also had some tragic disasters.

After more than 20 successful missions from 1981 to the end of 1985, disaster struck on January 28, 1986. Just 73 seconds after launch, the space shuttle Challenger started to break apart, and most of it disintegrated in mid-air, as shown in (Figure below). All seven crew members on board, including the first teacher in space, Christa McAuliffe, died. The problem was found to be an O-ring, a small part in one of the rocket boosters. 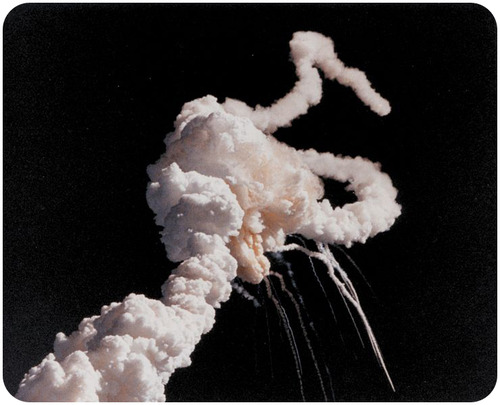 Plume of smoke from the Challenger disaster.

Safety was reviewed and improved. Shuttle missions started again in 1988, and more than 87 missions were completed without a major accident. Then during takeoff of the space shuttle Columbia on January 16, 2003, a small piece of insulating foam broke off the fuel tank, smashed into the front edge of one wing of the orbiter and damaged a tile. These tiles are heat-shield tiles that protect the shuttle from extremely high temperatures. When Columbia returned to Earth on February 3, 2003, it could not withstand the high temperature, and broke apart. Pieces of the shuttle were found throughout the southern United States. As in the Challenger disaster, all seven crew members died.

Again, shuttle missions were stopped for two years while NASA worked on safety. The Space Shuttle program was terminated in 2011 and the shuttles have all been retired. You can see them in various locations around the country:

Future missions to the ISS will be aboard the Russian Soyuz and eventually from a new American craft.

Many missions since the Challenger disaster have been designed without a crew. These missions are less expensive, less dangerous, and more flexible than manned mission and they provide a great deal of valuable information.

NASA and space agencies from other countries have launched dozens of satellites that collect data on the current state of Earth’s systems. NASA’s Landsat satellites take detailed images of Earth’s continents and coastal areas, such as those in (Figure below). Other satellites study the oceans, the atmosphere, the polar ice sheets, and other Earth systems. This data helps us to monitor climate change and understand how Earth’s systems affect one another. Many of the images used in this text are from satellites.

The two images here are from NASA’s Landsat 7 satellite and show New Orleans and Lake Pontchartrain on April 26, 2000, (left) and on August 30, 2005, (right), shortly after Hurricane Katrina. Dark blue areas in the city are underwater.

More about the Landsat program can be found at http://landsat.gsfc.nasa.gov/.

Some of the greatest astronomical discoveries — and greatest pictures, such as the one in (Figure below), have come from the Hubble Space Telescope. The Hubble was put into orbit by the space shuttle Discovery in 1990. Several shuttle missions returned to the Hubble to make repairs. 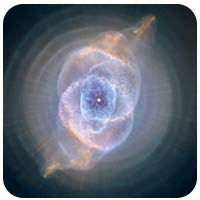 This image, taken by the Hubble Space Telescope, shows the Cat’s Eye Nebula. Hubble has produced thousands of beautiful pictures that are also very valuable for scientific research.

NASA has also put several other telescopes in space as described in the “Telescopes” lesson. The James Webb Telescope, scheduled to be launched into orbit in 2018, will replace the Hubble and have an even greater ability to view distant objects. Other countries, including Russia, Japan, and several European countries, have also put space telescopes in orbit.

The United States and other nations have had many missions around the solar system in recent years (Figure below). Rovers, essentially spacecraft on wheels have been sent to roam over Mars to collect data. The Mars Pathfinder, which landed in 1997, and Spirit and Opportunity, which landed in 2004, all lasted far longer than they were designed to. Curiosity, which landed on August 6, 2012, is currently exploring Martian climate and geology, specifically if there were once conditions in which life could exist. Several spacecraft are currently in orbit around Mars studying its surface and thin atmosphere.

(a) The Mars Pathfinder carried a rover, the Sojourner, to the surface. Here Sojourner takes a measurement of a rock scientists named Yogi. (b) Sunset on Mars, taken by Spirit in May 2005. (c) This artist’s painting of Opportunity shows the six wheels, as well as a set of instruments being extended forward by a robotic arm.

The Cassini mission has been studying Saturn, including its rings and moons, since 2004 and will be directed to crash into Saturn in 2017 (Figure below). The Huygens probe, built by the European Space Agency, is studying Saturn’s moon Titan. Titan has some of the conditions that are needed to support life.

An eclipse of Saturn taken by Cassini.

Some missions are studying the smaller objects in our solar system. The Deep Impact probe was sent to collide with a comet. The probe and telescopes on Earth and in space all collected data The impact was recorded by Deep Impact’s flyby spacecraft: http://upload.wikimedia.org/wikipedia/commons/9/90/121520main_HRI-Movie.gif.

The Stardust mission collected tiny dust particles from another comet. Missions are currently underway to study some of the larger asteroids and Pluto. Studies of smaller objects in the solar system may help us to understand how the solar system formed.

A manned trip to Mars to take place in the 2030s is being discussed, as are other possible missions.