The Carbon Cycle and the Nitrogen Cycle

Carbon is a very important element to living things. As the second most common element in the human body, we know that human life without carbon would not be possible. Protein, carbohydrates, and fats are all part of the body and all contain carbon. When your body breaks down food to produce energy, you break down protein, carbohydrates, and fat, and you breathe out carbon dioxide.

Carbon occurs in many forms on Earth and is found throughout the environment (Figure below). The element moves through organisms and then returns to the environment. When all this happens in balance, the ecosystem remains in balance too. In this section, let’s follow the path of a carbon atom over many years and see what happens. 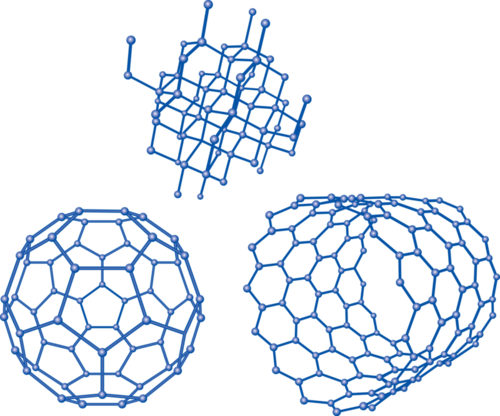 These are some of the structures that carbon takes.

Nitrogen is also a very important element, used as a nutrient for plant and animal growth. First, the nitrogen must be converted to a useful form. Without “fixed” nitrogen, plants, and therefore animals, could not exist as we know them.

The short term cycling of carbon begins with carbon dioxide (CO2) in the atmosphere.

The production of food energy by land plants.

Plants and animals engage in the reverse of photosynthesis, which is respiration. In respiration, animals use oxygen to convert the organic carbon in sugar into food energy they can use. Plants also go through respiration and consume some of the sugars they produce.

The chemical reaction for respiration is:

Do plants create energy? It is important to remember that plants do not create energy. They change the energy from sunlight into chemical energy that plants and animals can use as food (Figure below). 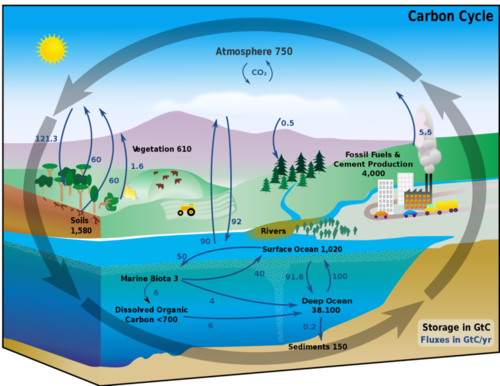 The carbon cycle shows where a carbon atom might be found. The black numbers indicate how much carbon is stored in various reservoirs, in billions of tons (“GtC” stands for gigatons of carbon). The purple numbers indicate how much carbon moves between reservoirs each year. The sediments, as defined in this diagram, do not include the ~70 million GtC of carbonate rock and kerogen.

Carbon Can Also Cycle in the Long Term

The carbon cycle has been discussed in other chapters. Using what you know, try to answer the following questions.

A reservoir can change from a sink to a source and vice-versa. A forest is a sink, but when the forest burns it becomes a source.

The amount of time that carbon stays, on average, in a reservoir is the residence time of carbon in that reservoir.

The concept of residence times is explored using the undergraduate population at UGA as an example. In this example the reservoir is the university (7d): http://www.youtube.com/watch?v=cIuaedcVvQg (2:44).

Scientists have a number of ways to see what atmospheric CO2 levels were in the past. One is to measure the composition of air bubbles trapped in glacial ice. The amount of CO2 in gas bubbles that date from before the Industrial Revolution, when society began to use fossil fuels, is thought to be the natural content of CO2 for this time period; that number was 280 parts per million (ppm).

By 1958, when scientists began to directly measure CO2 content from the atmosphere at Mauna Loa volcano in the Pacific Ocean, the amount was 316 ppm (Figure below). In 2009, the atmospheric CO2 content had risen to 387 ppm. 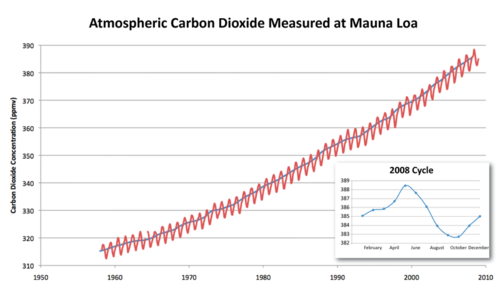 The amount of CO2 in the atmosphere has been measured at Mauna Loa Observatory since 1958.

Humans have changed the natural balance of the carbon cycle because we use coal, oil, and natural gas to supply our energy demands. Fossil fuels are a sink for CO2 when they form but they are a source for CO2 when they are burned. The equation for combustion of propane, which is a simple hydrocarbon looks like this:

The equation shows that when propane burns, it uses oxygen and produces carbon dioxide and water. So when a car burns a tank of gas, the amount of CO2 in the atmosphere increases just a little. Added over millions of tanks of gas and coal burned for electricity in power plants and all of the other sources of CO2, the result is the increase in atmospheric CO2 seen in the Figure above.

The second largest source of atmospheric CO2 is deforestation (Figure below). Trees naturally absorb CO2 while they are alive. Trees that are cut down lose their ability to absorb CO2. If the tree is burned or decomposes, it becomes a source of CO2. A forest can go from being a carbon sink to being a carbon source. 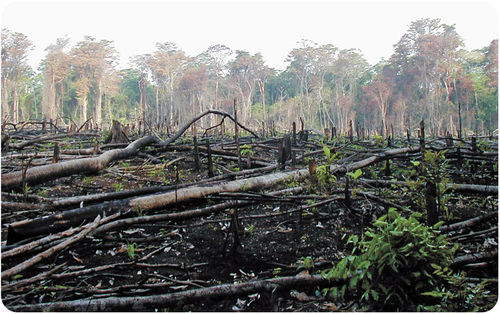 This forest in Mexico has been cut down and burned to clear forested land for agriculture.

Coal, oil, and natural gas as well as calcium carbonate rocks and ocean sediments are long term carbon sinks for the natural cycling of carbon. When humans extract and use these resources, combustion makes them into carbon sources.

For years, our oceans have absorbed some of the carbon dioxide that humans create through burning fossil fuels. But all that extra CO2 is making our oceans more acidic with potentially dire consequences. Learn more at: http://science.kqed.org/quest/video/acidic-seas/.

Why the Carbon Cycle is Important

Why is such a small amounts of carbon dioxide in the atmosphere even important? Carbon dioxide is a greenhouse gas (Figure below) so it absorbs infrared energy, the longer wavelengths of the Sun’s reflected rays. Greenhouse gases trap heat energy that would otherwise radiate out into space and warms Earth. This is like what happens in a greenhouse. The glass that makes up the greenhouse holds in heat that would otherwise radiate out. 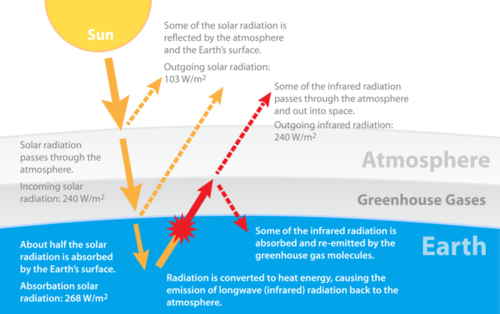 This diagram explains the role of greenhouse gases in our atmosphere.

This video Keeping up with Carbon from NASA, focuses on the oceans. Topics include what will happen as temperature warms and the oceans can hold less carbon, and ocean acidification (7a): http://www.youtube.com/watch?v=HrIr3xDhQ0E (5:39).

A very thorough but basic summary of the carbon cycle, including the effect of carbon dioxide in the atmosphere, is found in this video (7b): http://www.youtube.com/watch?v=U3SZKJVKRxQ (4:37).

Nitrogen (N2) is also vital for life on Earth as an essential component of organic materials, such as amino acids, nucleic acids, and chlorophyll (Figure below). 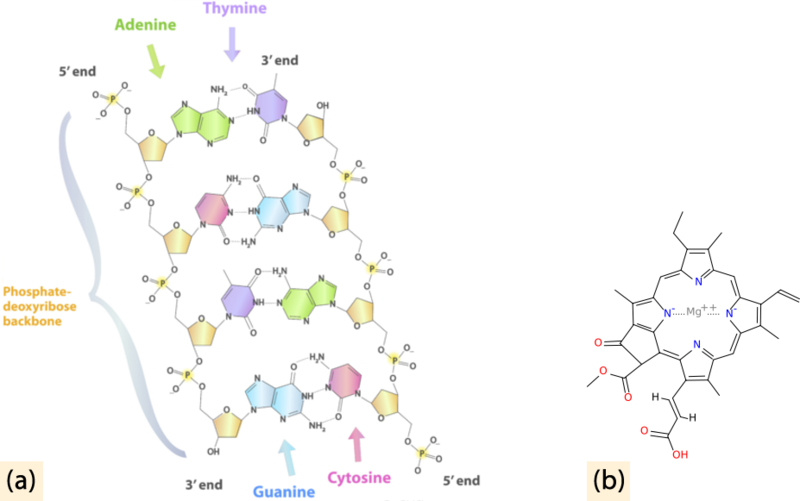 (a) Nitrogen is found in all amino acids, proteins, and nucleic acids such as DNA and RNA. (b) Chlorophyll molecules, essential for photosynthesis, contain nitrogen.

Although nitrogen is the most abundant gas in the atmosphere, it is not in a form that plants can use. To be useful, nitrogen must be “fixed,” or converted into a more useful form. Although some nitrogen is fixed by lightning or blue-green algae, much is modified by bacteria in the soil. These bacteria combine the nitrogen with oxygen or hydrogen to create nitrates or ammonia (Figure below). 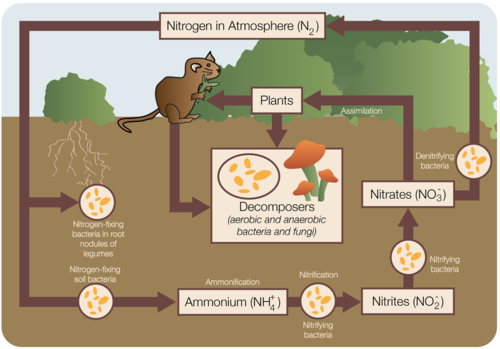 Nitrogen fixing bacteria either live free or in a symbiotic relationship with leguminous plants (peas, beans, peanuts). The symbiotic bacteria use carbohydrates from the plant to produce ammonia that is useful to the plant. Plants use this fixed nitrogen to build amino acids, nucleic acids (DNA, RNA), and chlorophyll. When these legumes die, the fixed nitrogen they contain fertilizes the soil.

Animals eat plant tissue and create animal tissue. After a plant or animal dies or an animal excretes waste, bacteria and some fungi in the soil fix the organic nitrogen and return it to the soil as ammonia. Nitrifying bacteria oxidize the ammonia to nitrites, other bacteria oxide the nitrites to nitrates, which can be used by the next generation of plants. In this way, nitrogen does not need to return to a gas. Under conditions when there is no oxygen, some bacteria can reduce nitrates to molecular nitrogen.

Usable nitrogen is sometimes the factor that limits how many organisms can grow in an ecosystem. Modern agricultural practices increase plant productivity by adding nitrogen fertilizers to the soil. This can have unintended consequences:

(a) Nitrogen runoff into Lake Atitlán, Guatemala, caused an algae bloom in the normally clear blue mountain lake. (b) Fish killed by a lack of oxygen in the water.

This very thorough video on the nitrogen cycle with an aquatic perspective was created by high school students (7a): (5:08).