Earth rotates once on its axis about every 24 hours. To an observer cooling down on the North Pole, the rotation appears counterclockwise. From nearly all points on Earth, the Sun appears to move across the sky from east to west each day. Of course, the Sun is not moving from east to west at all; Earth is rotating. The Moon and stars also seem to rise in the east and set in the west.

Shadows are areas where an object obstructs a light source so that darkness takes on the form of the object. On Earth, a shadow can be cast by the Sun, Moon or, rarely, Mercury or Venus.

A common misconception is that the Sun is closer to Earth in the summer and farther away from it during the winter. Instead, the seasons are caused by the 23.5° tilt of Earth’s axis of rotation relative to its plane of orbit around the Sun (Figure below). At summer solstice, June 21 or 22, Earth’s axis points toward the Sun and so the Sun is directly overhead at its furthest north point of the year, the Tropic of Cancer (23.5° N). 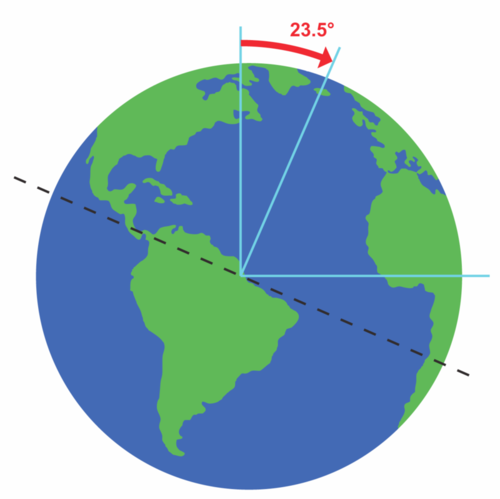 The Earth’s tilt on its axis leads to one hemisphere facing the Sun more than the other hemisphere and gives rise to seasons.

During the summer, areas north of the equator experience longer days and shorter nights. In the Southern Hemisphere, the Sun is as far away as it will be and so it is their winter. Locations will have longer nights and shorter days. The opposite occurs on winter solstice, which begins on December 21. More about seasons can be found in the Earth’s Atmosphere chapter.

Check out this video on why earth has seasons to learn more: http://www.youtube.com/watch?v=DuiQvPLWziQ.

A solar eclipse occurs when the new moon passes directly between the Earth and the Sun (Figure below). This casts a shadow on the Earth and blocks Earth’s view of the Sun.

A solar eclipse, not to scale.

A total solar eclipse occurs when the Moon’s shadow completely blocks the Sun (Figure below). When only a portion of the Sun is out of view, it is called a partial solar eclipse. 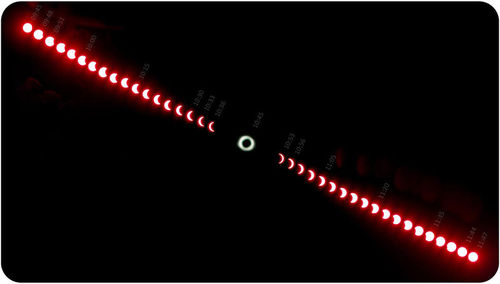 A solar eclipse shown as a series of photos.

Solar eclipses are rare and usually only last a few minutes because the Moon casts only a small shadow (Figure below).

A BBC video of a solar eclipse is seen here: http://www.youtube.com/watch?v=eOvWioz4PoQ.

The Moon’s shadow in a solar eclipse covers a very small area.

As the Sun is covered by the moon’s shadow, it will actually get cooler outside. Birds may begin to sing, and stars will become visible in the sky. During a solar eclipse, the corona and solar prominences can be seen.

A solar eclipse occurs when the Moon passes between Earth and the Sun in such a way that the Sun is either partially or totally hidden from view. Some people, including some scientists, chase eclipses all over the world to learn or just observe this amazing phenomenon. Learn more at: http://www.kqed.org/quest/television/eclipse-chasers. 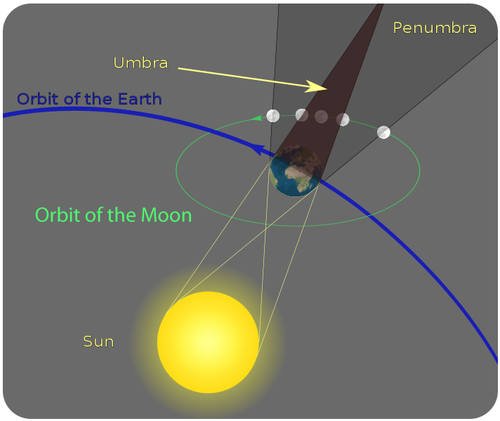 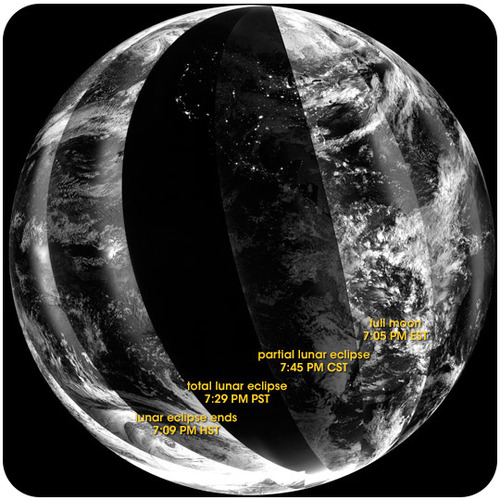 The moon glows with a dull red coloring during a total lunar eclipse, which you can see in this video of a lunar eclipse over Hawaii: http://www.youtube.com/watch?v=2dk–lPAi04.

Like everything in the solar system except the Sun, the Moon does not produce any light of its own — it only reflects sunlight. As the Moon moves around Earth, different portions of the satellite are illuminated. This causes the phases of the Moon, so that our view of the Moon goes from fully lit to completely dark and back again.

It takes about 29.5 days for the Moon to make one cycle relative to the Sun and go through all the phases (Figure below). The time between two new Moon phases or two full Moon phases is 29.5 days. Remember that the Moon’s orbital period is 27.3 days. The difference of 29.5 and 27.3 is that while the Moon is orbiting the Earth, the Earth is moving along in its orbit so it takes longer for the Moon to reach the same position relative to the Sun.

The phases of the moon as if the Sun is above the top of this picture with its rays directed downward.

An animation of lunar phases from the University of Illinois: http://projects.astro.illinois.edu/data/MoonPhases/index.html.

Tides are the regular rising and falling of Earth’s surface water in response to the gravitational attraction of the Moon and Sun. The Moon’s gravity pulls upwards on Earth’s water, causing it to bulge out in the direction of the Moon. On the other side of the Earth, a high tide is produced where the Moon’s pull is weakest. As the Earth rotates on its axis, the areas directly in line with the Moon experience high tides. The places directly in between the high tides are low tides. There are two high tides and two low tides each tidal day. Since the Earth is rotating on its axis, the high- low-tide cycle moves around the globe in a 24-hour period.

The gravity of the Sun also pulls Earth’s water towards it and causes its own tides. Because the sun is so far away, its pull is smaller than the Moon’s. When the Sun and Moon are in line, during the new moon and the full moon, their high tides add up and create a spring tide. During a spring tide, high tides are really high, which means that low tides are really low (Figure below). 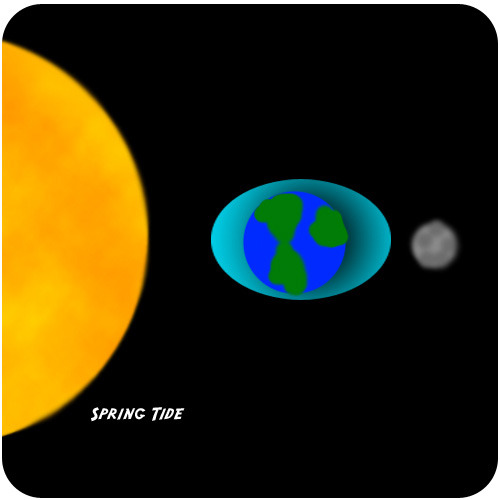 A spring tide is the added highs produced by the Moon and Sun and the added lows, creating a large tidal range.

When the Earth and Sun are in line but the Moon is perpendicular to the Earth a neap tide occurs. This happens when the moon is at first or last quarter-moon phase. In a neap tide the difference between high and low tides is not very large since the pull of gravity from the Sun partially cancels out the pull of gravity from the Moon. Neap tides produce less extreme tides than the normal tides (Figure below). 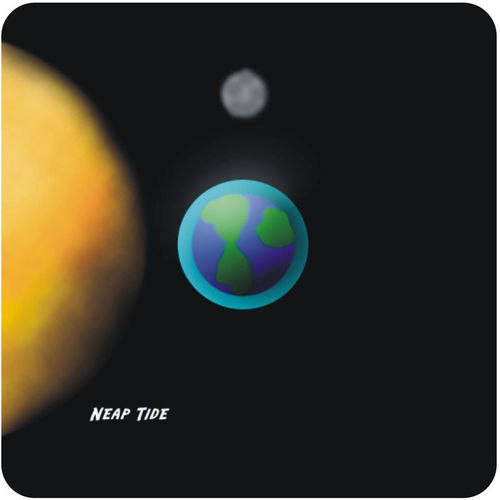 A neap tide occurs when the high tide of the Sun adds to the low tide of the Moon and vice versa so the tidal range is relatively small.

More about tides is found in the chapter Earth’s Ocean.