A volcano is a vent through which molten rock and gas escape from a magma chamber. Volcanoes differ in many features such as height, shape, and slope steepness. Some volcanoes are tall cones and others are just cracks in the ground (Figure below). As you might expect, the shape of a volcano is related to the composition of its magma.

Mount St. Helens was a beautiful, classic, cone-shaped volcano. The volcano’s 1980 eruption blew more than 400 meters (1,300 feet) off the top of the mountain.

Composite volcanoes are made of felsic to intermediate rock. The viscosity of the lava means that eruptions at these volcanoes are often explosive (Figure below). 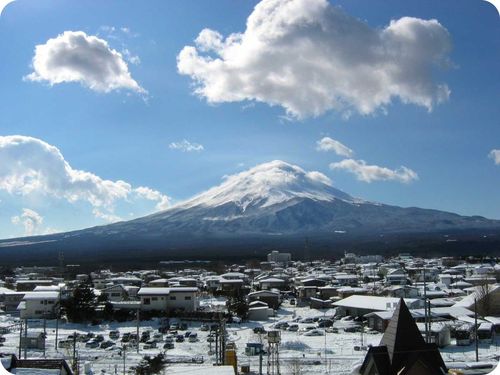 Mt. Fuji, the highest mountain in Japan, is a dormant composite volcano.

The viscous lava cannot travel far down the sides of the volcano before it solidifies, which creates the steep slopes of a composite volcano. Viscosity also causes some eruptions to explode as ash and small rocks. The volcano is constructed layer by layer, as ash and lava solidify, one upon the other (Figure below). The result is the classic cone shape of composite volcanoes. 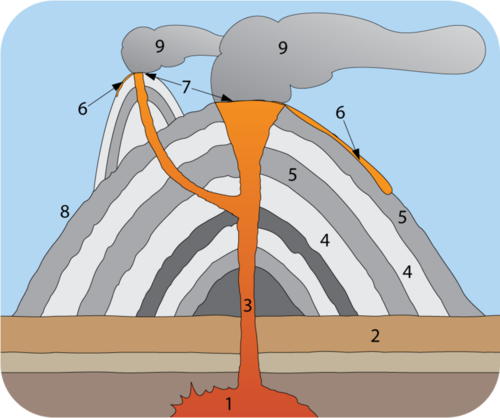 Mauna Loa Volcano in Hawaii (in the background) is the largest shield volcano on Earth with a diameter of more than 112 kilometers (70 miles). The volcano forms a significant part of the island of Hawaii.

The lava that creates shield volcanoes is fluid and flows easily. The spreading lava creates the shield shape. Shield volcanoes are built by many layers over time and the layers are usually of very similar composition. The low viscosity also means that shield eruptions are non-explosive.

This Volcanoes 101 video from National Geographic discusses where volcanoes are found and what their properties come from (3e): http://www.youtube.com/watch?v=uZp1dNybgfc (3:05).

In 1943, a Mexican farmer first witnessed a cinder cone erupting in his field. In a year, Paricutín was 336 meters high. By 1952, it reached 424 meters and then stopped erupting.

Cinder cones are often found near larger volcanoes (Figure below). 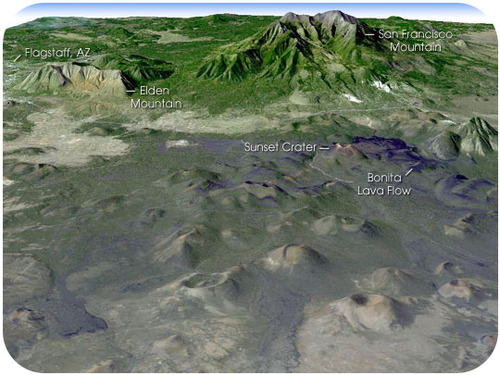 This Landsat image shows the topography of San Francisco Mountain, an extinct volcano, with many cinder cones near it in northern Arizona. Sunset crater is a cinder cone that erupted about 1,000 years ago.

Supervolcano eruptions are extremely rare in Earth history. It’s a good thing because they are unimaginably large. A supervolcano must erupt more than 1,000 cubic km (240 cubic miles) of material, compared with 1.2 km3 for Mount St. Helens or 25 km3 for Mount Pinatubo, a large eruption in the Philippines in 1991. Not surprisingly, supervolcanoes are the most dangerous type of volcano.

Supervolcanoes are a fairly new idea in volcanology. The exact cause of supervolcano eruptions is still debated. However, scientists think that a very large magma chamber erupts entirely in one catastrophic explosion. This creates a huge hole or caldera into which the surface collapses (Figure below). 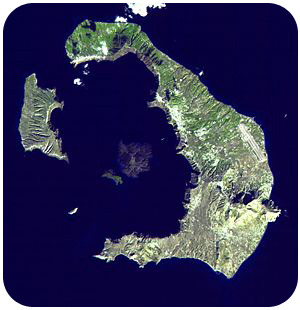 The caldera at Santorini in Greece is so large that it can only be seen by satellite.

The largest supervolcano in North America is beneath Yellowstone National Park in Wyoming. Yellowstone sits above a hotspot that has erupted catastrophically three times: 2.1 million, 1.3 million, and 640,000 years ago. Yellowstone has produced many smaller (but still enormous) eruptions more recently (Figure below). Fortunately, current activity at Yellowstone is limited to the region’s famous geysers. 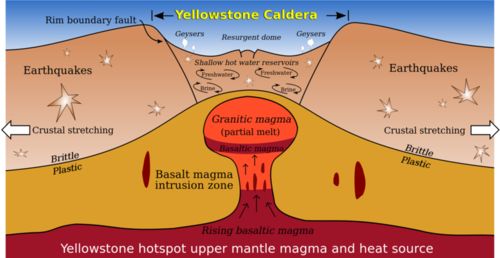 Long Valley Caldera, south of Mono Lake in California, is the second largest supervolcano in North America (Figure below). Long Valley had an extremely hot and explosive rhyolite about 700,000 years ago. An earthquake swarm in 1980 alerted geologists to the possibility of a future eruption, but the quakes have since calmed down. 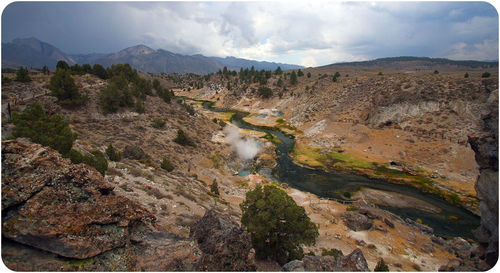 The hot water that gives Hot Creek, California, its name is heated by hot rock below Long Valley Caldera.

Interesting volcano videos are seen on National Geographic Videos, Environment Video, Natural Disasters, Earthquakes: http://video.nationalgeographic.com/video/player/environment/. One interesting one is “Mammoth Mountain,” which explores Hot Creek and the volcanic area it is a part of in California.