The Commoditization of the Personal Computer

Over the past thirty years, as the personal computer has gone from technical marvel to part of our everyday lives, it has also become a commodity. The PC has become a commodity in the sense that there is very little differentiation between computers, and the primary factor that controls their sale is their price. Hundreds of manufacturers all over the world now create parts for personal computers. Dozens of companies buy these parts and assemble the computers. As commodities, there are essentially no differences between computers made by these different companies. Profit margins for personal computers are razor-thin, leading hardware developers to find the lowest-cost manufacturing.

There is one brand of computer for which this is not the case – Apple. Because Apple does not make computers that run on the same open standards as other manufacturers, they can make a unique product that no one can easily copy. By creating what many consider to be a superior product, Apple can charge more for their computers than other manufacturers. Just as with the iPad and iPhone, Apple has chosen a strategy of differentiation, which, at least at this time, seems to be paying off.

THE PROBLEM OF ELECTRONIC WASTE 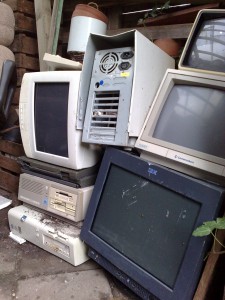 Personal computers have been around for over thirty-five years. Millions of them have been used and discarded. Mobile phones are now available in even the remotest parts of the world and, after a few years of use, they are discarded. Where does this electronic debris end up?

Often, it gets routed to any country that will accept it. Many times, it ends up in dumps in developing nations. These dumps are beginning to be seen as health hazards for those living near them. Though many manufacturers have made strides in using materials that can be recycled, electronic waste is a problem with which we must all deal.

Information systems hardware consists of the components of digital technology that you can touch. In this chapter, we reviewed the components that make up a personal computer, with the understanding that the configuration of a personal computer is very similar to that of any type of digital computing device. A personal computer is made up of many components, most importantly the CPU, motherboard, RAM, hard disk, removable media, and input/output devices. We also reviewed some variations on the personal computer, such as the tablet computer and the smartphone. In accordance with Moore’s Law, these technologies have improved quickly over the years, making today’s computing devices much more powerful than devices just a few years ago. Finally, we discussed two of the consequences of this evolution: the commoditization of the personal computer and the problem of electronic waste.