Children have always contributed to the total number of migrants crossing the southern border of the United States illegally, but in 2014, a steady overall increase in unaccompanied minors from Central America reached crisis proportions when tens of thousands of children from El Salvador, Guatemala, and Honduras crossed the Rio Grande and overwhelmed border patrols and local infrastructure (Dart 2014).

Since legislators passed the William Wilberforce Trafficking Victims Protection Reauthorization Act of 2008 in the last days of the Bush administration, unaccompanied minors from countries that do not share a border with the United States are guaranteed a hearing with an immigration judge where they may request asylum based on a “credible” fear of persecution or torture (U.S. Congress 2008). In some cases, these children are looking for relatives and can be placed with family while awaiting a hearing on their immigration status; in other cases they are held in processing centers until the Department of Health and Human Services makes other arrangements (Popescu 2014).

The 2014 surge placed such a strain on state resources that Texas began transferring the children to Immigration and Naturalization facilities in California and elsewhere, without incident for the most part. On July 1, 2014, however, buses carrying the migrant children were blocked by protesters in Murrietta, California, who chanted, “Go home” and “We don’t want you.” (Fox News and Associated Press 2014; Reyes 2014).

Given the fact that these children are fleeing various kinds of violence and extreme poverty, how should the U.S. government respond? Should the government pass laws granting a general amnesty? Or should it follow a zero-tolerance policy, automatically returning any and all unaccompanied minor migrants to their countries of origin so as to discourage additional immigration that will stress the already overwhelmed system? 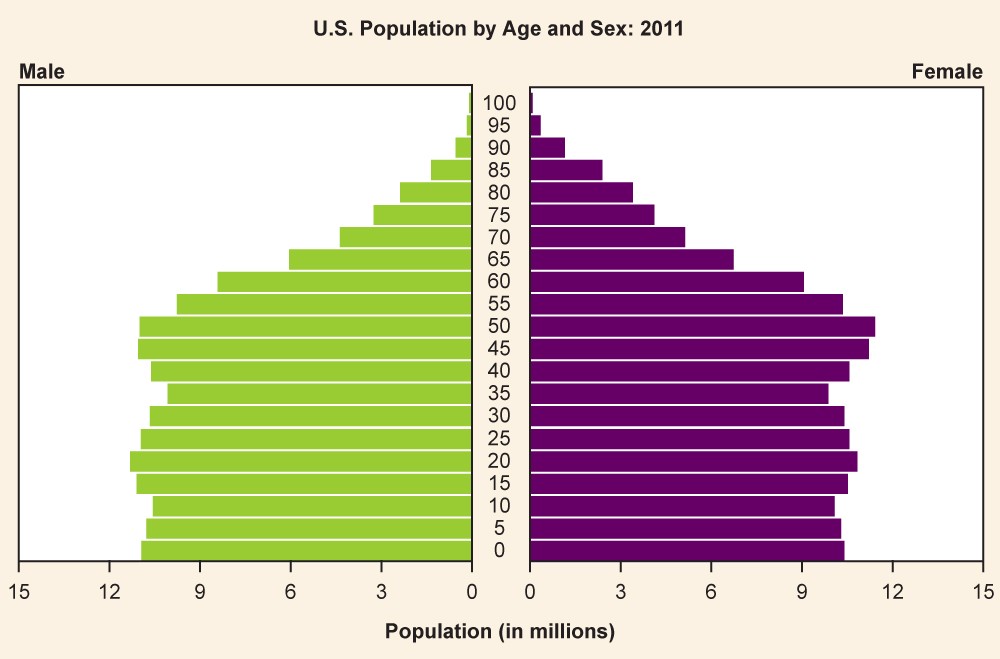 This population pyramid shows the breakdown of the 2010 U.S. population according to age and sex. (Graph courtesy of Econ Proph blog and the U.S. Census Bureau)

Comparing the three countries in this table reveals that there are more men than women in Afghanistan, whereas the reverse is true in Sweden and the United States. Afghanistan also has significantly higher fertility and mortality rates than either of the other two countries. Do these statistics surprise you? How do you think the population makeup affects the political climate and economics of the different countries?

Sociologists have long looked at population issues as central to understanding human interactions. Below we will look at four theories about population that inform sociological thought: Malthusian, zero population growth, cornucopian, and demographic transition theories.

Thomas Malthus (1766–1834) was an English clergyman who made dire predictions about earth’s ability to sustain its growing population. According to Malthusian theory, three factors would control human population that exceeded the earth’s carrying capacity, or how many people can live in a given area considering the amount of available resources. Malthus identified these factors as war, famine, and disease (Malthus 1798). He termed them “positive checks” because they increase mortality rates, thus keeping the population in check. They are countered by “preventive checks,” which also control the population but by reducing fertility rates; preventive checks include birth control and celibacy. Thinking practically, Malthus saw that people could produce only so much food in a given year, yet the population was increasing at an exponential rate. Eventually, he thought people would run out of food and begin to starve. They would go to war over increasingly scarce resources and reduce the population to a manageable level, and then the cycle would begin anew.

Of course, this has not exactly happened. The human population has continued to grow long past Malthus’s predictions. So what happened? Why didn’t we die off? There are three reasons sociologists believe we are continuing to expand the population of our planet. First, technological increases in food production have increased both the amount and quality of calories we can produce per person. Second, human ingenuity has developed new medicine to curtail death from disease. Finally, the development and widespread use of contraception and other forms of family planning have decreased the speed at which our population increases. But what about the future? Some still believe Malthus was correct and that ample resources to support the earth’s population will soon run out.

A neo-Malthusian researcher named Paul Ehrlich brought Malthus’s predictions into the twentieth century. However, according to Ehrlich, it is the environment, not specifically the food supply, that will play a crucial role in the continued health of planet’s population (Ehrlich 1968). Ehrlich’s ideas suggest that the human population is moving rapidly toward complete environmental collapse, as privileged people use up or pollute a number of environmental resources such as water and air. He advocated for a goal of zero population growth (ZPG), in which the number of people entering a population through birth or immigration is equal to the number of people leaving it via death or emigration. While support for this concept is mixed, it is still considered a possible solution to global overpopulation.

Of course, some theories are less focused on the pessimistic hypothesis that the world’s population will meet a detrimental challenge to sustaining itself. Cornucopian theory scoffs at the idea of humans wiping themselves out; it asserts that human ingenuity can resolve any environmental or social issues that develop. As an example, it points to the issue of food supply. If we need more food, the theory contends, agricultural scientists will figure out how to grow it, as they have already been doing for centuries. After all, in this perspective, human ingenuity has been up to the task for thousands of years and there is no reason for that pattern not to continue (Simon 1981).

Whether you believe that we are headed for environmental disaster and the end of human existence as we know it, or you think people will always adapt to changing circumstances, we can see clear patterns in population growth. Societies develop along a predictable continuum as they evolve from unindustrialized to postindustrial. Demographic transition theory (Caldwell and Caldwell 2006) suggests that future population growth will develop along a predictable four-stage model.

In Stage 1, birth, death, and infant mortality rates are all high, while life expectancy is short. An example of this stage is the 1800s in the United States. As countries begin to industrialize, they enter Stage 2, where birthrates are higher while infant mortality and the death rates drop. Life expectancy also increases. Afghanistan is currently in this stage. Stage 3 occurs once a society is thoroughly industrialized; birthrates decline, while life expectancy continues to increase. Death rates continue to decrease. Mexico’s population is at this stage. In the final phase, Stage 4, we see the postindustrial era of a society. Birth and death rates are low, people are healthier and live longer, and society enters a phase of population stability. Overall population may even decline. For example, Sweden is considered to be in Stage 4.

The United Nations Population Fund (2008) categorizes nations as high fertility, intermediate fertility, or low fertility. The United Nations (UN) anticipates the population growth will triple between 2011 and 2100 in high-fertility countries, which are currently concentrated in sub-Saharan Africa. For countries with intermediate fertility rates (the United States, India, and Mexico all fall into this category), growth is expected to be about 26 percent. And low-fertility countries like China, Australia, and most of Europe will actually see population declines of approximately 20 percent. The graphs below illustrate this trend.

Projected Population in the United States

Worldwide patterns of migration have changed, though the United States remains the most popular destination. From 1990 to 2013, the number of migrants living in the United States increased from one in six to one in five (The Pew Research Center 2013). Overall, in 2013 the United States was home to about 46 million foreign-born people, while only about 3 million U.S. citizens lived abroad. Of foreign-born citizens emigrating to the United States, 55 percent originated in Latin America and the Caribbean (Connor, Cohn, and Gonzalez-Barrera 2013).

While there are more foreign-born people residing in the United States legally, as of 2012 about 11.7 million resided here without legal status (Passel, Cohn, and Gonzalez-Barrera 2013). Most citizens agree that our national immigration policies are in need major adjustment. Almost three-quarters of those in a recent national survey believed illegal immigrants should have a path to citizenship provided they meet other requirements, such as speaking English or paying restitution for the time they spent in the country illegally. Interestingly, 55 percent of those surveyed who identified as Hispanic think a pathway to citizenship is of secondary importance to provisions for living legally in the United States without the threat of deportation (The Pew Research Center 2013).

Scholars understand demography through various analyses. Malthusian, zero population growth, cornucopian theory, and demographic transition theories all help sociologists study demography. The earth’s human population is growing quickly, especially in peripheral countries. Factors that impact population include birthrates, mortality rates, and migration, including immigration and emigration. There are numerous potential outcomes of the growing population, and sociological perspectives vary on the potential effect of these increased numbers. The growth will pressure the already taxed planet and its natural resources.

demography
the study of population

population composition
a snapshot of the demographic profile of a population based on fertility, mortality, and migration rates