Introduction to Groups and Organizations

Over the past decade, a grassroots effort to raise awareness of certain political issues has gained in popularity. As a result, Tea Party groups have popped up in nearly every community across the country. The followers of the Tea Party have charged themselves with calling “awareness to any issue which challenges the security, sovereignty, or domestic tranquility of our beloved nation, the United States of America” (Tea Party, Inc. 2014). The group takes its name from the famous so-called Tea Party that occurred in Boston Harbor in 1773. Its membership includes people from all walks of life who are taking a stand to protect their values and beliefs. Their beliefs tend to be anti-tax, anti-big government, pro-gun, and generally politically conservative.

Their political stance is supported by what they refer to as their “15 Non-Negotiable Core Beliefs.”

Tea Party politicians have been elected to several offices at the national, state, and local levels. In fact, Alabama, California, Florida, Iowa, Kansas, Michigan, Ohio, and Texas all had pro-Tea Party members win seats in the U.S. House of Representatives and the Senate. On the national stage, Tea Partiers are actively seeking the impeachment of President Barrack Obama for what they refer to “flagrant violations,” including forcing national healthcare (Obamacare) on the country, gun grabbing, and failing to protect victims of the terror attack on U.S. diplomatic offices in Benghazi, Libya, on September 11, 2012.

At the local level, Tea Party supporters have taken roles as mayors, county commissioners, city council members, and the like. In a small, rural, Midwestern county with a population of roughly 160,000, the three county commissioners who oversee the operation and administration of county government were two Republicans and a Democrat for years. During the 2012 election, the Democrat lost his seat to an outspoken Tea Party Republican who campaigned as pro-gun and fiscally conservative. He vowed to reduce government spending and shrink the size of county government. 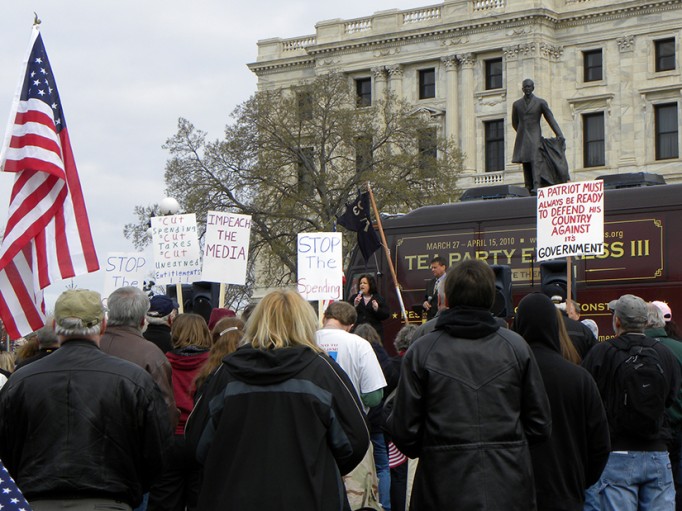 The national tour of the Tea Party Express visited Minnesota and held a rally outside the state capitol building. (Photo courtesy of Fibonacci Blue/flickr)

Groups like political parties are prevalent in our lives and provide a significant way we understand and define ourselves—both groups we feel a connection to and those we don’t. Groups also play an important role in society. As enduring social units, they help foster shared value systems and are key to the structure of society as we know it. There are three primary sociological perspectives for studying groups: Functionalist, Conflict, and Interactionist. We can look at the Tea Party movement through the lenses of these methods to better understand the roles and challenges that groups offer.