Theoretical Perspectives on Government and Power

Sociologists rely on organizational frameworks or paradigms to make sense of their study of sociology; already there are many widely recognized schemas for evaluating sociological data and observations. Each paradigm looks at the study of sociology through a unique lens. The sociological examination of government and power can thus be evaluated using a variety of perspectives that help the evaluator gain a broader perspective. Functionalism, conflict theory, and symbolic interactionism are a few of the more widely recognized philosophical stances in practice today.

Functionalists view government and politics as a way to enforce norms and regulate conflict. Functionalists see active social change, such as the sit-in on Wall Street, as undesirable because it forces change and, as a result, undesirable things that might have to be compensated for. Functionalists seek consensus and order in society. Dysfunction creates social problems that lead to social change. For instance, functionalists would see monetary political contributions as a way of keeping people connected to the democratic process. This would be in opposition to a conflict theorist who would see this financial contribution as a way for the rich to perpetuate their own wealth.

Conflict theory focuses on the social inequalities and power difference within a group, analyzing society through this lens. Philosopher and social scientist Karl Marx was a seminal force in developing the conflict theory perspective; he viewed social structure, rather than individual personality characteristics, as the cause of many social problems, such as poverty and crime. Marx believed that conflict between groups struggling to either attain wealth and power or keep the wealth and power they had was inevitable in a capitalist society, and conflict was the only way for the underprivileged to eventually gain some measure of equality.

C. Wright Mills (1956) elaborated on some of Marx’s concepts, coining the phrase power elite to describe what he saw as the small group of powerful people who control much of a society. Mills believed the power elite use government to develop social policies that allow them to keep their wealth. Contemporary theorist G. William Domhoff (2011) elaborates on ways in which the power elite may be seen as a subculture whose members follow similar social patterns such as joining elite clubs, attending select schools, and vacationing at a handful of exclusive destinations. 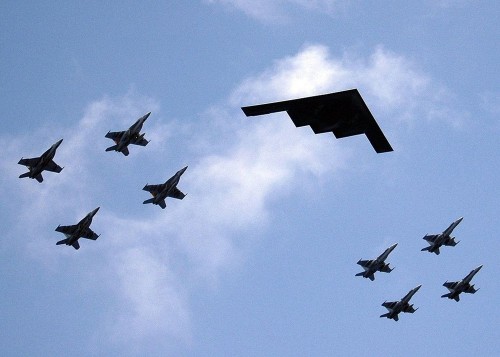 Although military technology has evolved considerably over the course of history, the fundamental causes of conflict among nations remain essentially the same. (Photo courtesy of Wikimedia Commons)

Even before there were modern nation-states, political conflicts arose among competing societies or factions of people. Vikings attacked continental European tribes in search of loot, and, later, European explorers landed on foreign shores to claim the resources of indigenous groups. Conflicts also arose among competing groups within individual sovereignties, as evidenced by the bloody French Revolution. Nearly all conflicts in the past and present, however, are spurred by basic desires: the drive to protect or gain territory and wealth, and the need to preserve liberty and autonomy.

According to sociologist and philosopher Karl Marx, such conflicts are necessary, although ugly, steps toward a more egalitarian society. Marx saw a historical pattern in which revolutionaries toppled elite power structures, after which wealth and authority became more evenly dispersed among the population, and the overall social order advanced. In this pattern of change through conflict, people tend to gain greater personal freedom and economic stability (1848).

Modern-day conflicts are still driven by the desire to gain or protect power and wealth, whether in the form of land and resources or in the form of liberty and autonomy. Internally, groups within the U.S. struggle within the system, by trying to achieve the outcomes they prefer. Political differences over budget issues, for example, led to the recent shutdown of the federal government, and alternative political groups, such as the Tea Party, are gaining a significant following.

The Arab Spring exemplifies oppressed groups acting collectively to change their governmental systems, seeking both greater liberty and greater economic equity. Some nations, such as Tunisia, have successfully transitioned to governmental change; others, like Egypt, have not yet reached consensus on a new government.

Unfortunately, the change process in some countries reached the point of active combat between the established government and the portion of the population seeking change, often called revolutionaries or rebels. Libya and Syria are two such countries; the multifaceted nature of the conflict, with several groups competing for their own desired ends, makes creation of a peaceful resolution more challenging.

Popular uprisings of citizens seeking governmental change have occurred this year in Bosnia, Brazil, Greece, Iran, Jordan, Portugal, Spain, Turkey, Ukraine, and most recently in Hong Kong. Although much smaller in size and scope, demonstrations took place in Ferguson, Missouri in 2014, where people protested the local government’s handling of a controversial shooting by the police.

The internal situation in the Ukraine is compounded by military aggression from neighboring Russia, which forcibly annexed the Crimean Peninsula, a geographic region of Ukraine, in early 2014 and threatens further military action in that area. This is an example of conflict driven by a desire to gain wealth and power in the form of land and resources. The United States and the European Union are watching the developing crisis closely and have implemented economic sanctions against Russia. 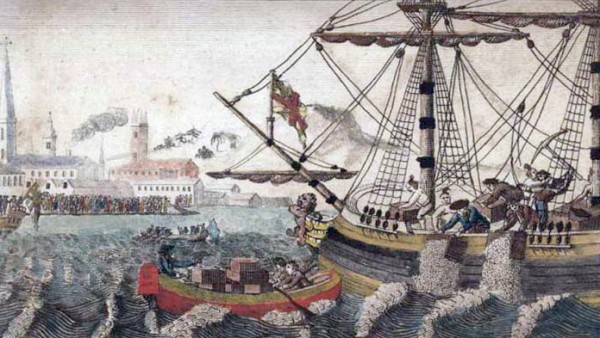 What symbols of the Boston Tea Party are represented in this painting? How might a symbolic interactionist explain the way the modern-day Tea Party has reclaimed and repurposed these symbolic meanings? (Photo courtesy of Wikimedia Commons)

Other sociologists study government and power by relying on the framework of symbolic interactionism, which is grounded in the works of Max Weber and George H. Mead.

Symbolic interactionism, as it pertains to government, focuses its attention on figures, emblems, or individuals that represent power and authority. Many diverse entities in larger society can be considered symbolic: trees, doves, wedding rings. Images that represent the power and authority of the United States include the White House, the eagle, and the American flag. The Seal of the President of the United States, along with the office in general, incites respect and reverence in many Americans.

Symbolic interactionists are not interested in large structures such as the government. As micro-sociologists, they are more interested in the face-to-face aspects of politics. In reality, much of politics consists of face-to-face backroom meetings and lobbyist efforts. What the public often sees is the front porch of politics that is sanitized by the media through gatekeeping.

Sociologists use frameworks to gain perspective on data and observations related to the study of power and government. Functionalism suggests that societal power and structure is predicated on cooperation, interdependence, and shared goals or values. Conflict theory, rooted in Marxism, asserts that societal structures are the result of social groups competing for wealth and influence. Symbolic interactionism examines a smaller realm of sociological interest: the individual’s perception of symbols of power and their subsequent reaction to the face-to-face interactions of the political realm.

Functionalism is a complex philosophical theory that pertains to a variety of disciplines beyond sociology. Visit the entry devoted to this intriguing topic on Stanford University’s Stanford Encyclopedia of Philosophy for a more comprehensive overview: http://openstaxcollege.org/l/Stanford_functionalism