The electrical changes taking place within a neuron, as described in the previous section, are similar to a light switch being turned on. A stimulus starts the depolarization, but the action potential runs on its own once a threshold has been reached. The question is now, “What flips the light switch on?” Temporary changes to the cell membrane voltage can result from neurons receiving information from the environment, or from the action of one neuron on another. These special types of potentials influence a neuron and determine whether an action potential will occur or not. Many of these transient signals originate at the synapse. 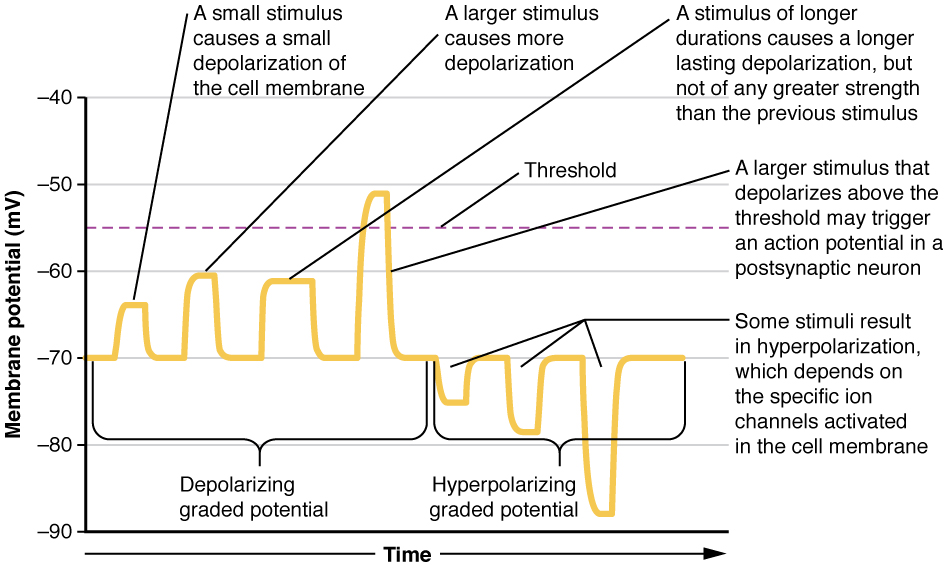 Figure 1. Graded Potentials. Graded potentials are temporary changes in the membrane voltage, the characteristics of which depend on the size of the stimulus. Some types of stimuli cause depolarization of the membrane, whereas others cause hyperpolarization. It depends on the specific ion channels that are activated in the cell membrane.

For the unipolar cells of sensory neurons—both those with free nerve endings and those within encapsulations—graded potentials develop in the dendrites that influence the generation of an action potential in the axon of the same cell. This is called a generator potential. For other sensory receptor cells, such as taste cells or photoreceptors of the retina, graded potentials in their membranes result in the release of neurotransmitters at synapses with sensory neurons. This is called a receptor potential. 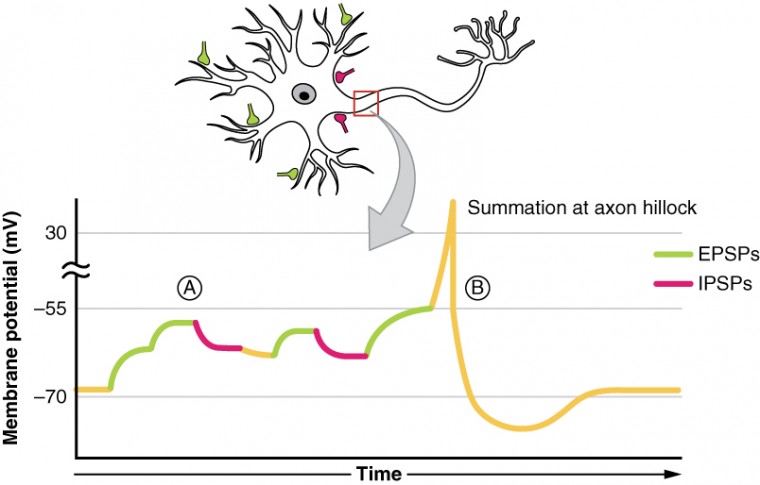 Watch this video to learn about summation.

The process of converting electrical signals to chemical signals and back requires subtle changes that can result in transient increases or decreases in membrane voltage. To cause a lasting change in the target cell, multiple signals are usually added together, or summated. Does spatial summation have to happen all at once, or can the separate signals arrive on the postsynaptic neuron at slightly different times? Explain your answer.

An example of a chemical synapse is the neuromuscular junction (NMJ) described in the chapter on muscle tissue. In the nervous system, there are many more synapses that are essentially the same as the NMJ. All synapses have common characteristics, which can be summarized in this list:

When an action potential reaches the axon terminals, voltage-gated Ca2+ channels in the membrane of the synaptic end bulb open. The concentration of Ca2+ increases inside the end bulb, and the Ca2+ ion associates with proteins in the outer surface of neurotransmitter vesicles. The Ca2+ facilitates the merging of the vesicle with the presynaptic membrane so that the neurotransmitter is released through exocytosis into the small gap between the cells, known as the synaptic cleft. 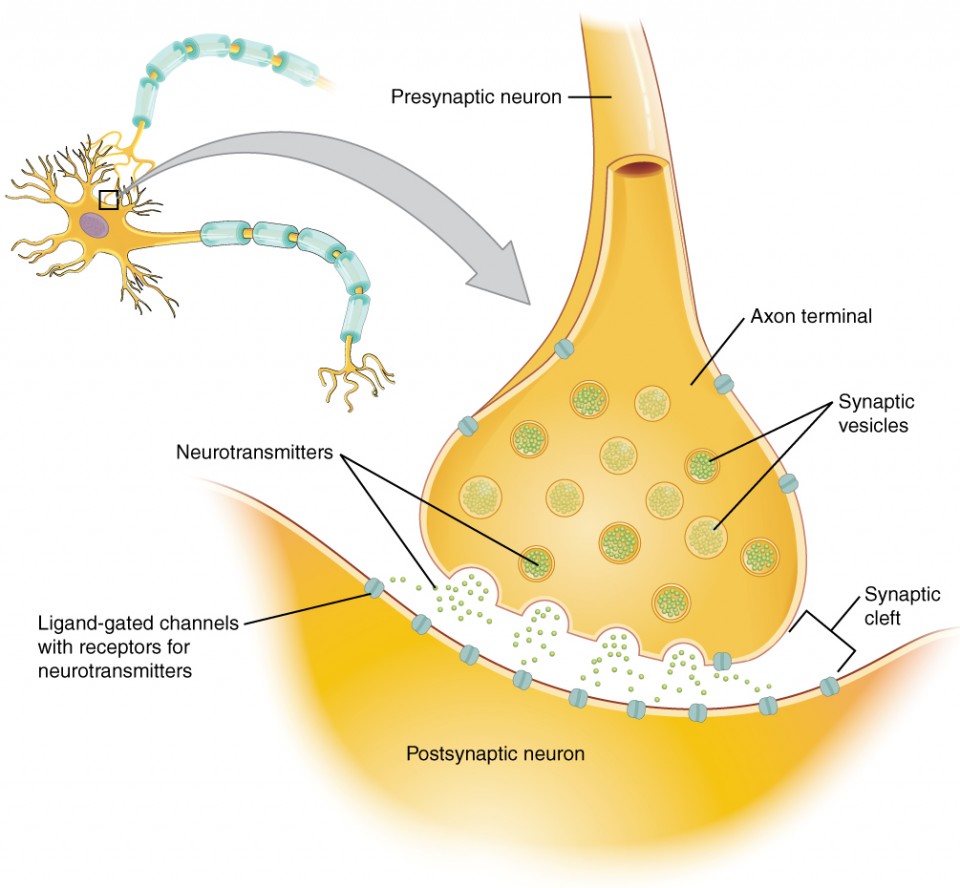 Another group of neurotransmitters are amino acids. This includes glutamate (Glu), GABA (gamma-aminobutyric acid, a derivative of glutamate), and glycine (Gly). These amino acids have an amino group and a carboxyl group in their chemical structures. Glutamate is one of the 20 amino acids that are used to make proteins. Each amino acid neurotransmitter would be part of its own system, namely the glutamatergic, GABAergic, and glycinergic systems. They each have their own receptors and do not interact with each other. Amino acid neurotransmitters are eliminated from the synapse by reuptake. A pump in the cell membrane of the presynaptic element, or sometimes a neighboring glial cell, will clear the amino acid from the synaptic cleft so that it can be recycled, repackaged in vesicles, and released again.

Another class of neurotransmitter is the biogenic amine, a group of neurotransmitters that are enzymatically made from amino acids. They have amino groups in them, but no longer have carboxyl groups and are therefore no longer classified as amino acids. Serotonin is made from tryptophan. It is the basis of the serotonergic system, which has its own specific receptors. Serotonin is transported back into the presynaptic cell for repackaging.

A neuropeptide is a neurotransmitter molecule made up of chains of amino acids connected by peptide bonds. This is what a protein is, but the term protein implies a certain length to the molecule. Some neuropeptides are quite short, such as met-enkephalin, which is five amino acids long. Others are long, such as beta-endorphin, which is 31 amino acids long. Neuropeptides are often released at synapses in combination with another neurotransmitter, and they often act as hormones in other systems of the body, such as vasoactive intestinal peptide (VIP) or substance P.

The effect of a neurotransmitter on the postsynaptic element is entirely dependent on the receptor protein. First, if there is no receptor protein in the membrane of the postsynaptic element, then the neurotransmitter has no effect. The depolarizing or hyperpolarizing effect is also dependent on the receptor. When acetylcholine binds to the nicotinic receptor, the postsynaptic cell is depolarized. This is because the receptor is a cation channel and positively charged Na+ will rush into the cell. However, when acetylcholine binds to the muscarinic receptor, of which there are several variants, it might cause depolarization or hyperpolarization of the target cell.

The amino acid neurotransmitters, glutamate, glycine, and GABA, are almost exclusively associated with just one effect. Glutamate is considered an excitatory amino acid, but only because Glu receptors in the adult cause depolarization of the postsynaptic cell. Glycine and GABA are considered inhibitory amino acids, again because their receptors cause hyperpolarization.

The biogenic amines have mixed effects. For example, the dopamine receptors that are classified as D1 receptors are excitatory whereas D2-type receptors are inhibitory. Biogenic amine receptors and neuropeptide receptors can have even more complex effects because some may not directly affect the membrane potential, but rather have an effect on gene transcription or other metabolic processes in the neuron. The characteristics of the various neurotransmitter systems presented in this section are organized in Table 1.

The important thing to remember about neurotransmitters, and signaling chemicals in general, is that the effect is entirely dependent on the receptor. Neurotransmitters bind to one of two classes of receptors at the cell surface, ionotropic or metabotropic (Figure 4). Ionotropic receptors are ligand-gated ion channels, such as the nicotinic receptor for acetylcholine or the glycine receptor. A metabotropic receptor involves a complex of proteins that result in metabolic changes within the cell. The receptor complex includes the transmembrane receptor protein, a G protein, and an effector protein. The neurotransmitter, referred to as the first messenger, binds to the receptor protein on the extracellular surface of the cell, and the intracellular side of the protein initiates activity of the G protein. The G protein is a guanosine triphosphate (GTP) hydrolase that physically moves from the receptor protein to the effector protein to activate the latter. An effector protein is an enzyme that catalyzes the generation of a new molecule, which acts as the intracellular mediator of the signal that binds to the receptor. This intracellular mediator is called the second messenger.

Figure 4. Receptor Types. (a) An ionotropic receptor is a channel that opens when the neurotransmitter binds to it. (b) A metabotropic receptor is a complex that causes metabolic changes in the cell when the neurotransmitter binds to it (1). After binding, the G protein hydrolyzes GTP and moves to the effector protein (2). When the G protein contacts the effector protein, a second messenger is generated, such as cAMP (3). The second messenger can then go on to cause changes in the neuron, such as opening or closing ion channels, metabolic changes, and changes in gene transcription.

Different receptors use different second messengers. Two common examples of second messengers are cyclic adenosine monophosphate (cAMP) and inositol triphosphate (IP3). The enzyme adenylate cyclase (an example of an effector protein) makes cAMP, and phospholipase C is the enzyme that makes IP3. Second messengers, after they are produced by the effector protein, cause metabolic changes within the cell. These changes are most likely the activation of other enzymes in the cell. In neurons, they often modify ion channels, either opening or closing them. These enzymes can also cause changes in the cell, such as the activation of genes in the nucleus, and therefore the increased synthesis of proteins. In neurons, these kinds of changes are often the basis of stronger connections between cells at the synapse and may be the basis of learning and memory.

Watch this video to learn about the release of a neurotransmitter.

Disorders of the Nervous System

The underlying cause of some neurodegenerative diseases, such as Alzheimer’s and Parkinson’s, appears to be related to proteins—specifically, to proteins behaving badly. One of the strongest theories of what causes Alzheimer’s disease is based on the accumulation of beta-amyloid plaques, dense conglomerations of a protein that is not functioning correctly. Parkinson’s disease is linked to an increase in a protein known as alpha-synuclein that is toxic to the cells of the substantia nigra nucleus in the midbrain.

For proteins to function correctly, they are dependent on their three-dimensional shape. The linear sequence of amino acids folds into a three-dimensional shape that is based on the interactions between and among those amino acids. When the folding is disturbed, and proteins take on a different shape, they stop functioning correctly. But the disease is not necessarily the result of functional loss of these proteins; rather, these altered proteins start to accumulate and may become toxic. For example, in Alzheimer’s, the hallmark of the disease is the accumulation of these amyloid plaques in the cerebral cortex. The term coined to describe this sort of disease is “proteopathy” and it includes other diseases. Creutzfeld-Jacob disease, the human variant of the prion disease known as mad cow disease in the bovine, also involves the accumulation of amyloid plaques, similar to Alzheimer’s. Diseases of other organ systems can fall into this group as well, such as cystic fibrosis or type 2 diabetes. Recognizing the relationship between these diseases has suggested new therapeutic possibilities. Interfering with the accumulation of the proteins, and possibly as early as their original production within the cell, may unlock new ways to alleviate these devastating diseases.

Take the quiz below to check your understanding of Communication Between Neurons: