Figure 1. Fibrous Joints. Fibrous joints form strong connections between bones. (a) Sutures join most bones of the skull. (b) An interosseous membrane forms a syndesmosis between the radius and ulna bones of the forearm. (c) A gomphosis is a specialized fibrous joint that anchors a tooth to its socket in the jaw.

All the bones of the skull, except for the mandible, are joined to each other by a fibrous joint called a suture. The fibrous connective tissue found at a suture (“to bind or sew”) strongly unites the adjacent skull bones and thus helps to protect the brain and form the face. In adults, the skull bones are closely opposed and fibrous connective tissue fills the narrow gap between the bones. The suture is frequently convoluted, forming a tight union that prevents most movement between the bones. (See Figure 1a.) Thus, skull sutures are functionally classified as a synarthrosis, although some sutures may allow for slight movements between the cranial bones. 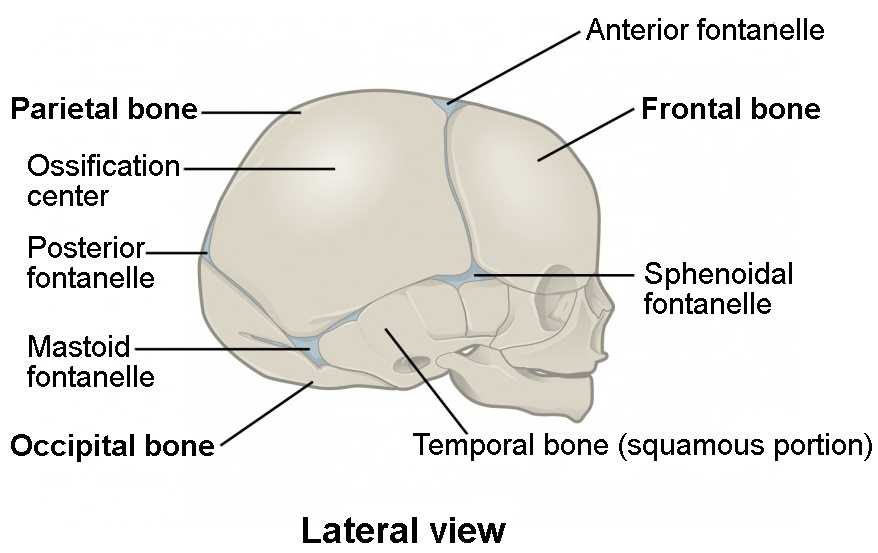 Figure 2. The Newborn Skull. The fontanelles of a newborn’s skull are broad areas of fibrous connective tissue that form fibrous joints between the bones of the skull.

During birth, the fontanelles provide flexibility to the skull, allowing the bones to push closer together or to overlap slightly, thus aiding movement of the infant’s head through the birth canal. After birth, these expanded regions of connective tissue allow for rapid growth of the skull and enlargement of the brain. The fontanelles greatly decrease in width during the first year after birth as the skull bones enlarge. When the connective tissue between the adjacent bones is reduced to a narrow layer, these fibrous joints are now called sutures. At some sutures, the connective tissue will ossify and be converted into bone, causing the adjacent bones to fuse to each other. This fusion between bones is called a synostosis (“joined by bone”). Examples of synostosis fusions between cranial bones are found both early and late in life. At the time of birth, the frontal and maxillary bones consist of right and left halves joined together by sutures, which disappear by the eighth year as the halves fuse together to form a single bone. Late in life, the sagittal, coronal, and lambdoid sutures of the skull will begin to ossify and fuse, causing the suture line to gradually disappear.

A syndesmosis (“fastened with a band”) is a type of fibrous joint in which two parallel bones are united to each other by fibrous connective tissue. The gap between the bones may be narrow, with the bones joined by ligaments, or the gap may be wide and filled in by a broad sheet of connective tissue called an interosseous membrane.

In the forearm, the wide gap between the shaft portions of the radius and ulna bones are strongly united by an interosseous membrane (see Figure 1b). Similarly, in the leg, the shafts of the tibia and fibula are also united by an interosseous membrane. In addition, at the distal tibiofibular joint, the articulating surfaces of the bones lack cartilage and the narrow gap between the bones is anchored by fibrous connective tissue and ligaments on both the anterior and posterior aspects of the joint. Together, the interosseous membrane and these ligaments form the tibiofibular syndesmosis.

The syndesmoses found in the forearm and leg serve to unite parallel bones and prevent their separation. However, a syndesmosis does not prevent all movement between the bones, and thus this type of fibrous joint is functionally classified as an amphiarthrosis. In the leg, the syndesmosis between the tibia and fibula strongly unites the bones, allows for little movement, and firmly locks the talus bone in place between the tibia and fibula at the ankle joint. This provides strength and stability to the leg and ankle, which are important during weight bearing. In the forearm, the interosseous membrane is flexible enough to allow for rotation of the radius bone during forearm movements. Thus in contrast to the stability provided by the tibiofibular syndesmosis, the flexibility of the antebrachial interosseous membrane allows for the much greater mobility of the forearm.

A gomphosis (“fastened with bolts”) is the specialized fibrous joint that anchors the root of a tooth into its bony socket within the maxillary bone (upper jaw) or mandible bone (lower jaw) of the skull. A gomphosis is also known as a peg-and-socket joint. Spanning between the bony walls of the socket and the root of the tooth are numerous short bands of dense connective tissue, each of which is called a periodontal ligament (see Figure 1c). Due to the immobility of a gomphosis, this type of joint is functionally classified as a synarthrosis.

Take the quiz below to check your understanding of Fibrous Joints: