Proper physiological functioning depends on a very tight balance between the concentrations of acids and bases in the blood. Acid-balance balance is measured using the pH scale, as shown in. A variety of buffering systems permits blood and other bodily fluids to maintain a narrow pH range, even in the face of perturbations. A buffer is a chemical system that prevents a radical change in fluid pH by dampening the change in hydrogen ion concentrations in the case of excess acid or base. Most commonly, the substance that absorbs the ions is either a weak acid, which takes up hydroxyl ions, or a weak base, which takes up hydrogen ions.

Buffer Systems in the Body

The buffer systems in the human body are extremely efficient, and different systems work at different rates. It takes only seconds for the chemical buffers in the blood to make adjustments to pH. The respiratory tract can adjust the blood pH upward in minutes by exhaling CO2 from the body. The renal system can also adjust blood pH through the excretion of hydrogen ions (H+) and the conservation of bicarbonate, but this process takes hours to days to have an effect.

Nearly all proteins can function as buffers. Proteins are made up of amino acids, which contain positively charged amino groups and negatively charged carboxyl groups. The charged regions of these molecules can bind hydrogen and hydroxyl ions, and thus function as buffers. Buffering by proteins accounts for two-thirds of the buffering power of the blood and most of the buffering within cells.

Hemoglobin as a Buffer

Hemoglobin is the principal protein inside of red blood cells and accounts for one-third of the mass of the cell. During the conversion of CO2 into bicarbonate, hydrogen ions liberated in the reaction are buffered by hemoglobin, which is reduced by the dissociation of oxygen. This buffering helps maintain normal pH. The process is reversed in the pulmonary capillaries to re-form CO2, which then can diffuse into the air sacs to be exhaled into the atmosphere. This process is discussed in detail in the chapter on the respiratory system.

As with the phosphate buffer, a weak acid or weak base captures the free ions, and a significant change in pH is prevented. Bicarbonate ions and carbonic acid are present in the blood in a 20:1 ratio if the blood pH is within the normal range. With 20 times more bicarbonate than carbonic acid, this capture system is most efficient at buffering changes that would make the blood more acidic. This is useful because most of the body’s metabolic wastes, such as lactic acid and ketones, are acids. Carbonic acid levels in the blood are controlled by the expiration of CO2 through the lungs. In red blood cells, carbonic anhydrase forces the dissociation of the acid, rendering the blood less acidic. Because of this acid dissociation, CO2 is exhaled (see equations above). The level of bicarbonate in the blood is controlled through the renal system, where bicarbonate ions in the renal filtrate are conserved and passed back into the blood. However, the bicarbonate buffer is the primary buffering system of the IF surrounding the cells in tissues throughout the body. 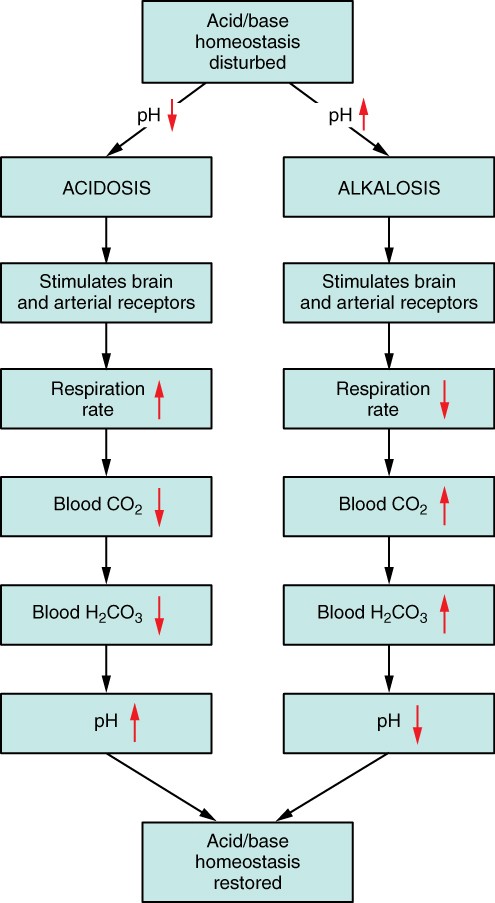 Figure 1. The respiratory system can reduce blood pH by removing CO2 from the blood.

The respiratory system contributes to the balance of acids and bases in the body by regulating the blood levels of carbonic acid. CO2 in the blood readily reacts with water to form carbonic acid, and the levels of CO2 and carbonic acid in the blood are in equilibrium. When the CO2 level in the blood rises (as it does when you hold your breath), the excess CO2 reacts with water to form additional carbonic acid, lowering blood pH. Increasing the rate and/or depth of respiration (which you might feel the “urge” to do after holding your breath) allows you to exhale more CO2. The loss of CO2 from the body reduces blood levels of carbonic acid and thereby adjusts the pH upward, toward normal levels. As you might have surmised, this process also works in the opposite direction. Excessive deep and rapid breathing (as in hyperventilation) rids the blood of CO2 and reduces the level of carbonic acid, making the blood too alkaline. This brief alkalosis can be remedied by rebreathing air that has been exhaled into a paper bag. Rebreathing exhaled air will rapidly bring blood pH down toward normal.

The chemical reactions that regulate the levels of CO2 and carbonic acid occur in the lungs when blood travels through the lung’s pulmonary capillaries. Minor adjustments in breathing are usually sufficient to adjust the pH of the blood by changing how much CO2 is exhaled. In fact, doubling the respiratory rate for less than 1 minute, removing “extra” CO2, would increase the blood pH by 0.2. This situation is common if you are exercising strenuously over a period of time. To keep up the necessary energy production, you would produce excess CO2 (and lactic acid if exercising beyond your aerobic threshold). In order to balance the increased acid production, the respiration rate goes up to remove the CO2. This helps to keep you from developing acidosis.

The body regulates the respiratory rate by the use of chemoreceptors, which primarily use CO2 as a signal. Peripheral blood sensors are found in the walls of the aorta and carotid arteries. These sensors signal the brain to provide immediate adjustments to the respiratory rate if CO2 levels rise or fall. Yet other sensors are found in the brain itself. Changes in the pH of CSF affect the respiratory center in the medulla oblongata, which can directly modulate breathing rate to bring the pH back into the normal range.

Hypercapnia, or abnormally elevated blood levels of CO2, occurs in any situation that impairs respiratory functions, including pneumonia and congestive heart failure. Reduced breathing (hypoventilation) due to drugs such as morphine, barbiturates, or ethanol (or even just holding one’s breath) can also result in hypercapnia. Hypocapnia, or abnormally low blood levels of CO2, occurs with any cause of hyperventilation that drives off the CO2, such as salicylate toxicity, elevated room temperatures, fever, or hysteria.

The renal regulation of the body’s acid-base balance addresses the metabolic component of the buffering system. Whereas the respiratory system (together with breathing centers in the brain) controls the blood levels of carbonic acid by controlling the exhalation of CO2, the renal system controls the blood levels of bicarbonate. A decrease of blood bicarbonate can result from the inhibition of carbonic anhydrase by certain diuretics or from excessive bicarbonate loss due to diarrhea. Blood bicarbonate levels are also typically lower in people who have Addison’s disease (chronic adrenal insufficiency), in which aldosterone levels are reduced, and in people who have renal damage, such as chronic nephritis. Finally, low bicarbonate blood levels can result from elevated levels of ketones (common in unmanaged diabetes mellitus), which bind bicarbonate in the filtrate and prevent its conservation.

Bicarbonate ions, HCO3−, found in the filtrate, are essential to the bicarbonate buffer system, yet the cells of the tubule are not permeable to bicarbonate ions. The steps involved in supplying bicarbonate ions to the system are seen in previous diagram and are summarized below: 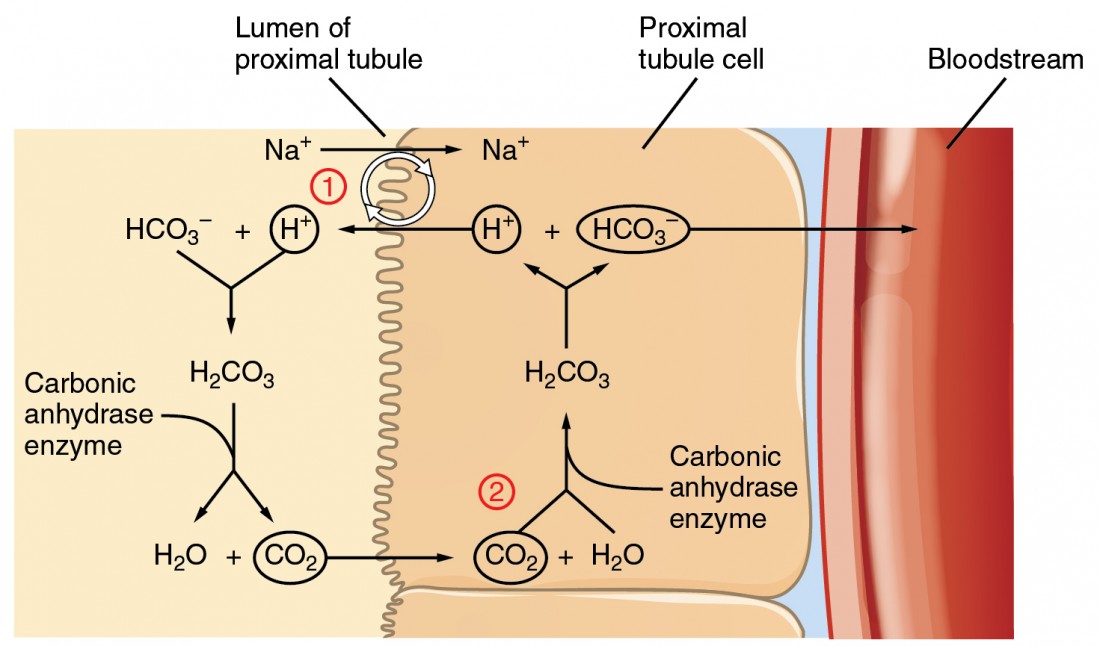 Figure 2. Tubular cells are not permeable to bicarbonate; thus, bicarbonate is conserved rather than reabsorbed. Steps 1 and 2 of bicarbonate conservation are indicated.

Disorders of the Acid-Base Balance: Ketoacidosis

Diabetic acidosis, or ketoacidosis, occurs most frequently in people with poorly controlled diabetes mellitus. When certain tissues in the body cannot get adequate amounts of glucose, they depend on the breakdown of fatty acids for energy. When acetyl groups break off the fatty acid chains, the acetyl groups then non-enzymatically combine to form ketone bodies, acetoacetic acid, beta-hydroxybutyric acid, and acetone, all of which increase the acidity of the blood. In this condition, the brain isn’t supplied with enough of its fuel—glucose—to produce all of the ATP it requires to function.

Ketoacidosis can be severe and, if not detected and treated properly, can lead to diabetic coma, which can be fatal. A common early symptom of ketoacidosis is deep, rapid breathing as the body attempts to drive off CO2 and compensate for the acidosis. Another common symptom is fruity-smelling breath, due to the exhalation of acetone. Other symptoms include dry skin and mouth, a flushed face, nausea, vomiting, and stomach pain. Treatment for diabetic coma is ingestion or injection of sugar; its prevention is the proper daily administration of insulin.

A person who is diabetic and uses insulin can initiate ketoacidosis if a dose of insulin is missed. Among people with type 2 diabetes, those of Hispanic and African-American descent are more likely to go into ketoacidosis than those of other ethnic backgrounds, although the reason for this is unknown.

A variety of buffering systems exist in the body that helps maintain the pH of the blood and other fluids within a narrow range—between pH 7.35 and 7.45. A buffer is a substance that prevents a radical change in fluid pH by absorbing excess hydrogen or hydroxyl ions. Most commonly, the substance that absorbs the ion is either a weak acid, which takes up a hydroxyl ion (OH–), or a weak base, which takes up a hydrogen ion (H+). Several substances serve as buffers in the body, including cell and plasma proteins, hemoglobin, phosphates, bicarbonate ions, and carbonic acid. The bicarbonate buffer is the primary buffering system of the IF surrounding the cells in tissues throughout the body. The respiratory and renal systems also play major roles in acid-base homeostasis by removing CO2 and hydrogen ions, respectively, from the body.