Visit this site for an overview of digestion of food in different regions of the digestive tract. Note the route of non-fat nutrients from the small intestine to their release as nutrients to the body.

The first of these processes, ingestion, refers to the entry of food into the alimentary canal through the mouth. There, the food is chewed and mixed with saliva, which contains enzymes that begin breaking down the carbohydrates in the food plus some lipid digestion via lingual lipase. Chewing increases the surface area of the food and allows an appropriately sized bolus to be produced. 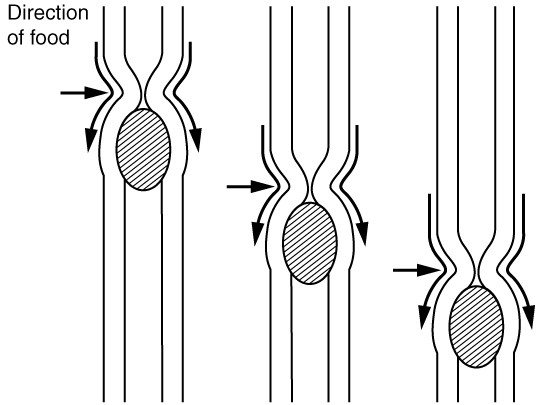 Food leaves the mouth when the tongue and pharyngeal muscles propel it into the esophagus. This act of swallowing, the last voluntary act until defecation, is an example of propulsion, which refers to the movement of food through the digestive tract. It includes both the voluntary process of swallowing and the involuntary process of peristalsis. Peristalsis consists of sequential, alternating waves of contraction and relaxation of alimentary wall smooth muscles, which act to propel food along (Figure 1). These waves also play a role in mixing food with digestive juices. Peristalsis is so powerful that foods and liquids you swallow enter your stomach even if you are standing on your head.

Digestion includes both mechanical and chemical processes. Mechanical digestion is a purely physical process that does not change the chemical nature of the food. Instead, it makes the food smaller to increase both surface area and mobility. It includes mastication, or chewing, as well as tongue movements that help break food into smaller bits and mix food with saliva. Although there may be a tendency to think that mechanical digestion is limited to the first steps of the digestive process, it occurs after the food leaves the mouth, as well. The mechanical churning of food in the stomach serves to further break it apart and expose more of its surface area to digestive juices, creating an acidic “soup” called chyme. Segmentation, which occurs mainly in the small intestine, consists of localized contractions of circular muscle of the muscularis layer of the alimentary canal. These contractions isolate small sections of the intestine, moving their contents back and forth while continuously subdividing, breaking up, and mixing the contents. By moving food back and forth in the intestinal lumen, segmentation mixes food with digestive juices and facilitates absorption.

In chemical digestion, starting in the mouth, digestive secretions break down complex food molecules into their chemical building blocks (for example, proteins into separate amino acids). These secretions vary in composition, but typically contain water, various enzymes, acids, and salts. The process is completed in the small intestine.

Food that has been broken down is of no value to the body unless it enters the bloodstream and its nutrients are put to work. This occurs through the process of absorption, which takes place primarily within the small intestine. There, most nutrients are absorbed from the lumen of the alimentary canal into the bloodstream through the epithelial cells that make up the mucosa. Lipids are absorbed into lacteals and are transported via the lymphatic vessels to the bloodstream (the subclavian veins near the heart). The details of these processes will be discussed later.

In defecation, the final step in digestion, undigested materials are removed from the body as feces.

Aging and the Digestive System: From Appetite Suppression to Constipation

Age-related changes in the digestive system begin in the mouth and can affect virtually every aspect of the digestive system. Taste buds become less sensitive, so food isn’t as appetizing as it once was. A slice of pizza is a challenge, not a treat, when you have lost teeth, your gums are diseased, and your salivary glands aren’t producing enough saliva. Swallowing can be difficult, and ingested food moves slowly through the alimentary canal because of reduced strength and tone of muscular tissue. Neurosensory feedback is also dampened, slowing the transmission of messages that stimulate the release of enzymes and hormones.

Pathologies that affect the digestive organs—such as hiatal hernia, gastritis, and peptic ulcer disease—can occur at greater frequencies as you age. Problems in the small intestine may include duodenal ulcers, maldigestion, and malabsorption. Problems in the large intestine include hemorrhoids, diverticular disease, and constipation. Conditions that affect the function of accessory organs—and their abilities to deliver pancreatic enzymes and bile to the small intestine—include jaundice, acute pancreatitis, cirrhosis, and gallstones.

In some cases, a single organ is in charge of a digestive process. For example, ingestion occurs only in the mouth and defecation only in the anus. However, most digestive processes involve the interaction of several organs and occur gradually as food moves through the alimentary canal (Figure 2). 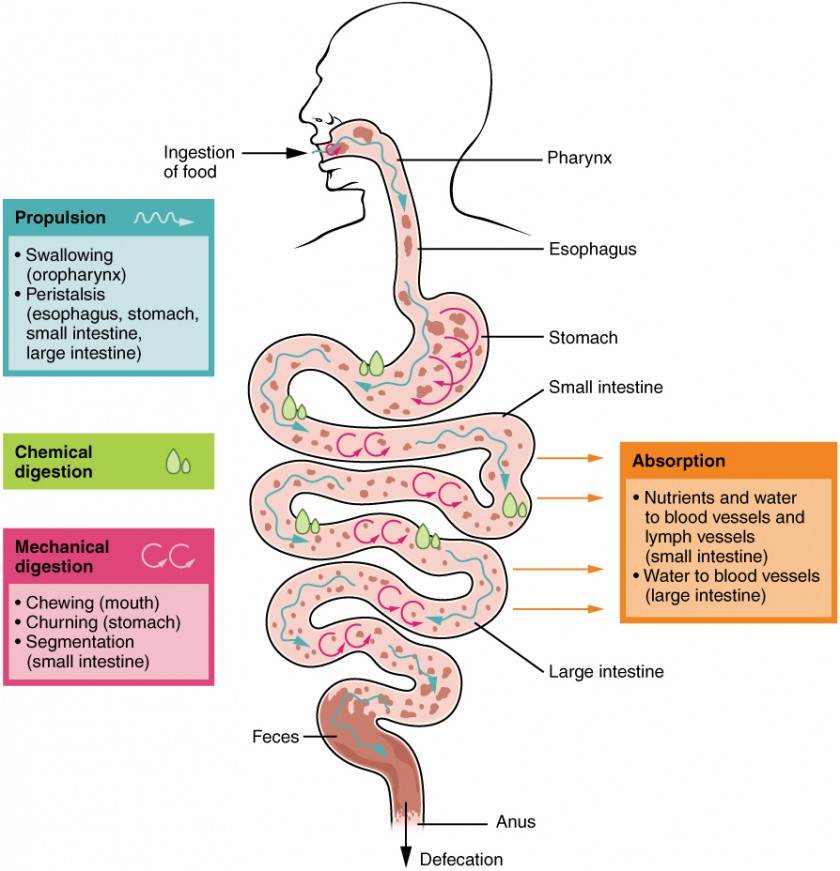 Some chemical digestion occurs in the mouth. Some absorption can occur in the mouth and stomach, for example, alcohol and aspirin.

The walls of the alimentary canal contain a variety of sensors that help regulate digestive functions. These include mechanoreceptors, chemoreceptors, and osmoreceptors, which are capable of detecting mechanical, chemical, and osmotic stimuli, respectively. For example, these receptors can sense when the presence of food has caused the stomach to expand, whether food particles have been sufficiently broken down, how much liquid is present, and the type of nutrients in the food (lipids, carbohydrates, and/or proteins). Stimulation of these receptors provokes an appropriate reflex that furthers the process of digestion. This may entail sending a message that activates the glands that secrete digestive juices into the lumen, or it may mean the stimulation of muscles within the alimentary canal, thereby activating peristalsis and segmentation that move food along the intestinal tract.

The walls of the entire alimentary canal are embedded with nerve plexuses that interact with the central nervous system and other nerve plexuses—either within the same digestive organ or in different ones. These interactions prompt several types of reflexes. Extrinsic nerve plexuses orchestrate long reflexes, which involve the central and autonomic nervous systems and work in response to stimuli from outside the digestive system. Short reflexes, on the other hand, are orchestrated by intrinsic nerve plexuses within the alimentary canal wall. These two plexuses and their connections were introduced earlier as the enteric nervous system. Short reflexes regulate activities in one area of the digestive tract and may coordinate local peristaltic movements and stimulate digestive secretions. For example, the sight, smell, and taste of food initiate long reflexes that begin with a sensory neuron delivering a signal to the medulla oblongata. The response to the signal is to stimulate cells in the stomach to begin secreting digestive juices in preparation for incoming food. In contrast, food that distends the stomach initiates short reflexes that cause cells in the stomach wall to increase their secretion of digestive juices.

A variety of hormones are involved in the digestive process. The main digestive hormone of the stomach is gastrin, which is secreted in response to the presence of food. Gastrin stimulates the secretion of gastric acid by the parietal cells of the stomach mucosa. Other GI hormones are produced and act upon the gut and its accessory organs. Hormones produced by the duodenum include secretin, which stimulates a watery secretion of bicarbonate by the pancreas; cholecystokinin (CCK), which stimulates the secretion of pancreatic enzymes and bile from the liver and release of bile from the gallbladder; and gastric inhibitory peptide, which inhibits gastric secretion and slows gastric emptying and motility. These GI hormones are secreted by specialized epithelial cells, called endocrinocytes, located in the mucosal epithelium of the stomach and small intestine. These hormones then enter the bloodstream, through which they can reach their target organs.

The digestive system ingests and digests food, absorbs released nutrients, and excretes food components that are indigestible. The six activities involved in this process are ingestion, motility, mechanical digestion, chemical digestion, absorption, and defecation. These processes are regulated by neural and hormonal mechanisms.

absorption: passage of digested products from the intestinal lumen through mucosal cells and into the bloodstream or lacteals

defecation: elimination of undigested substances from the body in the form of feces

ingestion: taking food into the GI tract through the mouth

peristalsis: muscular contractions and relaxations that propel food through the GI tract

segmentation: alternating contractions and relaxations of non-adjacent segments of the intestine that move food forward and backward, breaking it apart and mixing it with digestive juices