Fats (or triglycerides) within the body are ingested as food or synthesized by adipocytes or hepatocytes from carbohydrate precursors. Lipid metabolism entails the oxidation of fatty acids to either generate energy or synthesize new lipids from smaller constituent molecules. Lipid metabolism is associated with carbohydrate metabolism, as products of glucose (such as acetyl CoA) can be converted into lipids.

Figure 1. A triglyceride molecule (a) breaks down into a monoglyceride (b).

Lipid metabolism begins in the intestine where ingested triglycerides are broken down into smaller chain fatty acids and subsequently into monoglyceride molecules by pancreatic lipases, enzymes that break down fats after they are emulsified by bile salts. When food reaches the small intestine in the form of chyme, a digestive hormone called cholecystokinin (CCK) is released by intestinal cells in the intestinal mucosa. CCK stimulates the release of pancreatic lipase from the pancreas and stimulates the contraction of the gallbladder to release stored bile salts into the intestine. CCK also travels to the brain, where it can act as a hunger suppressant. 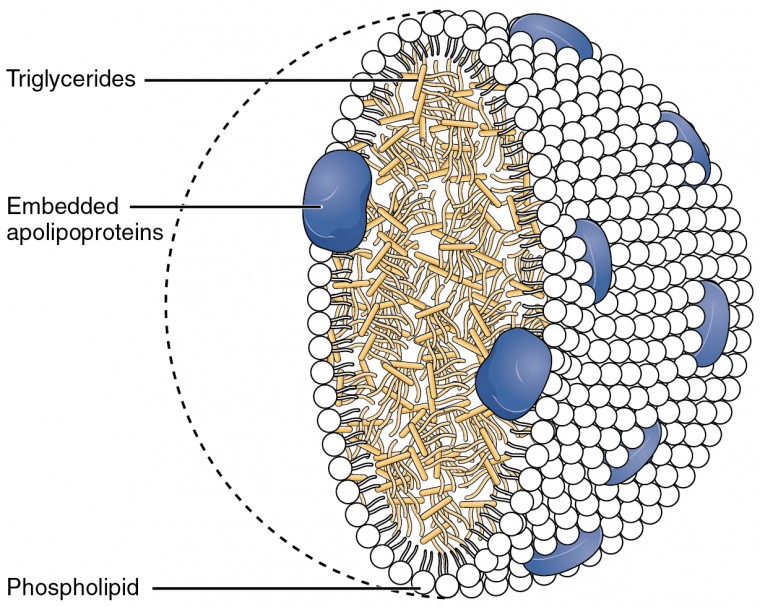 Figure 2. Chylomicrons contain triglycerides, cholesterol molecules, and other apolipoproteins (protein molecules). They function to carry these water-insoluble molecules from the intestine, through the lymphatic system, and into the bloodstream, which carries the lipids to adipose tissue for storage.

Together, the pancreatic lipases and bile salts break down triglycerides into free fatty acids. These fatty acids can be transported across the intestinal membrane. However, once they cross the membrane, they are recombined to again form triglyceride molecules. Within the intestinal cells, these triglycerides are packaged along with cholesterol molecules in phospholipid vesicles called chylomicrons. The chylomicrons enable fats and cholesterol to move within the aqueous environment of your lymphatic and circulatory systems. Chylomicrons leave the enterocytes by exocytosis and enter the lymphatic system via lacteals in the villi of the intestine. From the lymphatic system, the chylomicrons are transported to the circulatory system. Once in the circulation, they can either go to the liver or be stored in fat cells (adipocytes) that comprise adipose (fat) tissue found throughout the body.

To obtain energy from fat, triglycerides must first be broken down by hydrolysis into their two principal components, fatty acids and glycerol. This process, called lipolysis, takes place in the cytoplasm. The resulting fatty acids are oxidized by β-oxidation into acetyl CoA, which is used by the Krebs cycle. The glycerol that is released from triglycerides after lipolysis directly enters the glycolysis pathway as DHAP. Because one triglyceride molecule yields three fatty acid molecules with as much as 16 or more carbons in each one, fat molecules yield more energy than carbohydrates and are an important source of energy for the human body. Triglycerides yield more than twice the energy per unit mass when compared to carbohydrates and proteins. Therefore, when glucose levels are low, triglycerides can be converted into acetyl CoA molecules and used to generate ATP through aerobic respiration. 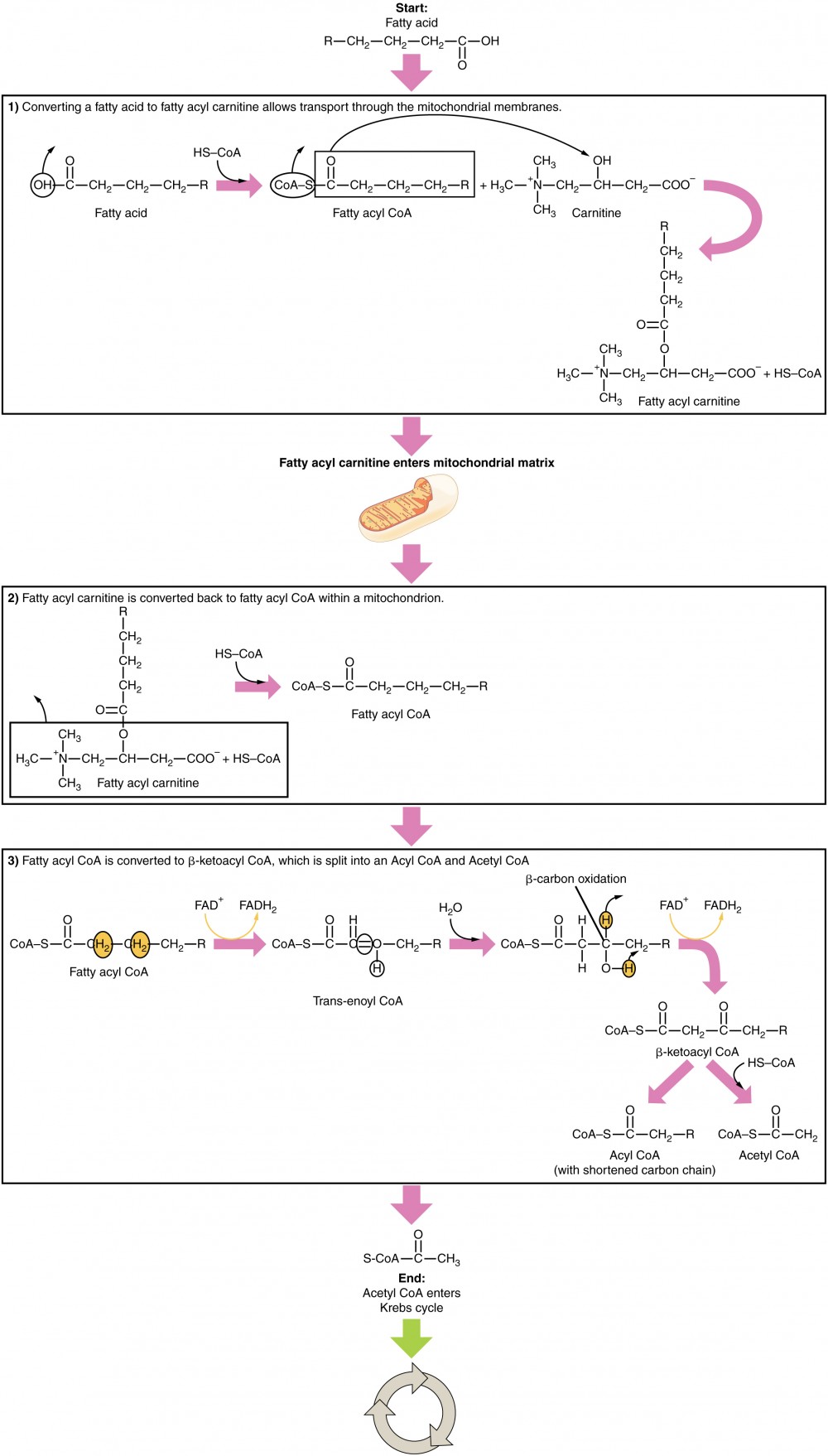 Figure 3. Click for a larger image. During fatty acid oxidation, triglycerides can be broken down into acetyl CoA molecules and used for energy when glucose levels are low.

If excessive acetyl CoA is created from the oxidation of fatty acids and the Krebs cycle is overloaded and cannot handle it, the acetyl CoA is diverted to create ketone bodies. These ketone bodies can serve as a fuel source if glucose levels are too low in the body. Ketones serve as fuel in times of prolonged starvation or when patients suffer from uncontrolled diabetes and cannot utilize most of the circulating glucose. In both cases, fat stores are liberated to generate energy through the Krebs cycle and will generate ketone bodies when too much acetyl CoA accumulates.

In this ketone synthesis reaction, excess acetyl CoA is converted into hydroxymethylglutaryl CoA (HMG CoA). HMG CoA is a precursor of cholesterol and is an intermediate that is subsequently converted into β-hydroxybutyrate, the primary ketone body in the blood.

Figure 4. Excess acetyl CoA is diverted from the Krebs cycle to the ketogenesis pathway. This reaction occurs in the mitochondria of liver cells. The result is the production of β-hydroxybutyrate, the primary ketone body found in the blood.

Organs that have classically been thought to be dependent solely on glucose, such as the brain, can actually use ketones as an alternative energy source. This keeps the brain functioning when glucose is limited. When ketones are produced faster than they can be used, they can be broken down into CO2 and acetone. The acetone is removed by exhalation. One symptom of ketogenesis is that the patient’s breath smells sweet like alcohol. This effect provides one way of telling if a diabetic is properly controlling the disease. The carbon dioxide produced can acidify the blood, leading to diabetic ketoacidosis, a dangerous condition in diabetics. 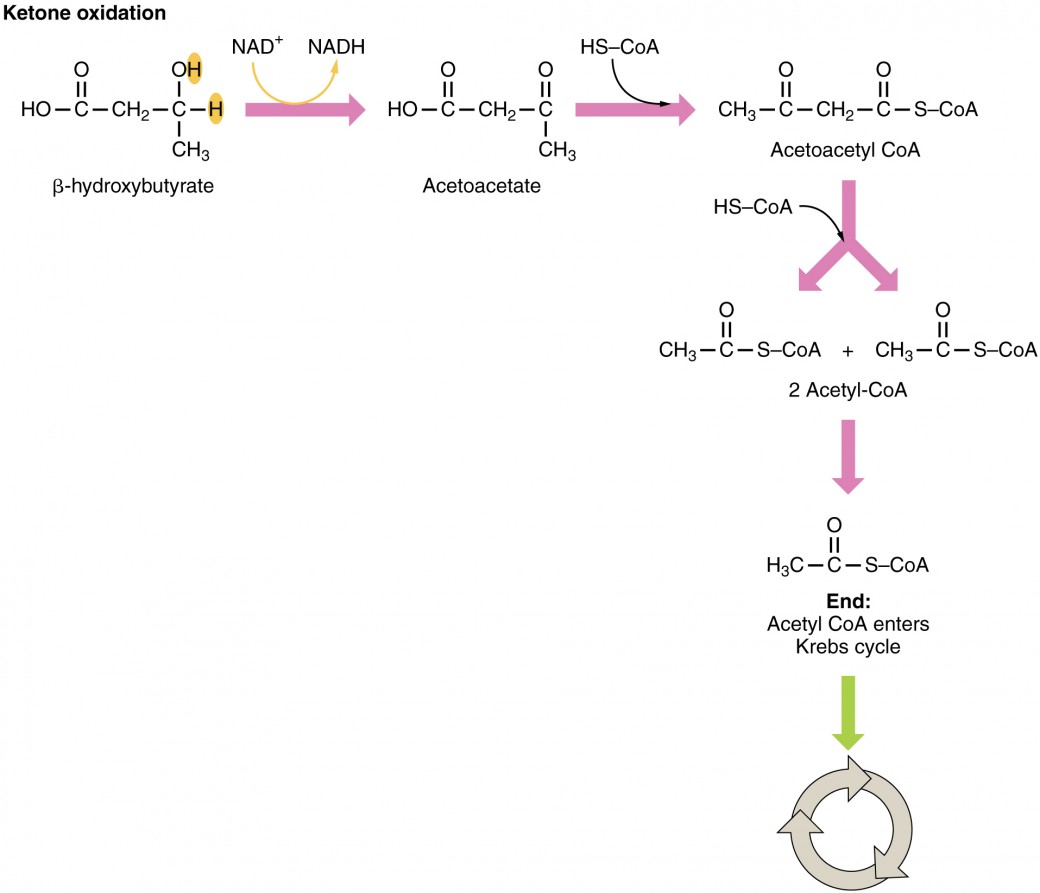 Figure 5. When glucose is limited, ketone bodies can be oxidized to produce acetyl CoA to be used in the Krebs cycle to generate energy.

When glucose levels are plentiful, the excess acetyl CoA generated by glycolysis can be converted into fatty acids, triglycerides, cholesterol, steroids, and bile salts. This process, called lipogenesis, creates lipids (fat) from the acetyl CoA and takes place in the cytoplasm of adipocytes (fat cells) and hepatocytes (liver cells). When you eat more glucose or carbohydrates than your body needs, your system uses acetyl CoA to turn the excess into fat. Although there are several metabolic sources of acetyl CoA, it is most commonly derived from glycolysis. Acetyl CoA availability is significant, because it initiates lipogenesis. Lipogenesis begins with acetyl CoA and advances by the subsequent addition of two carbon atoms from another acetyl CoA; this process is repeated until fatty acids are the appropriate length. Because this is a bond-creating anabolic process, ATP is consumed. However, the creation of triglycerides and lipids is an efficient way of storing the energy available in carbohydrates. Triglycerides and lipids, high-energy molecules, are stored in adipose tissue until they are needed. 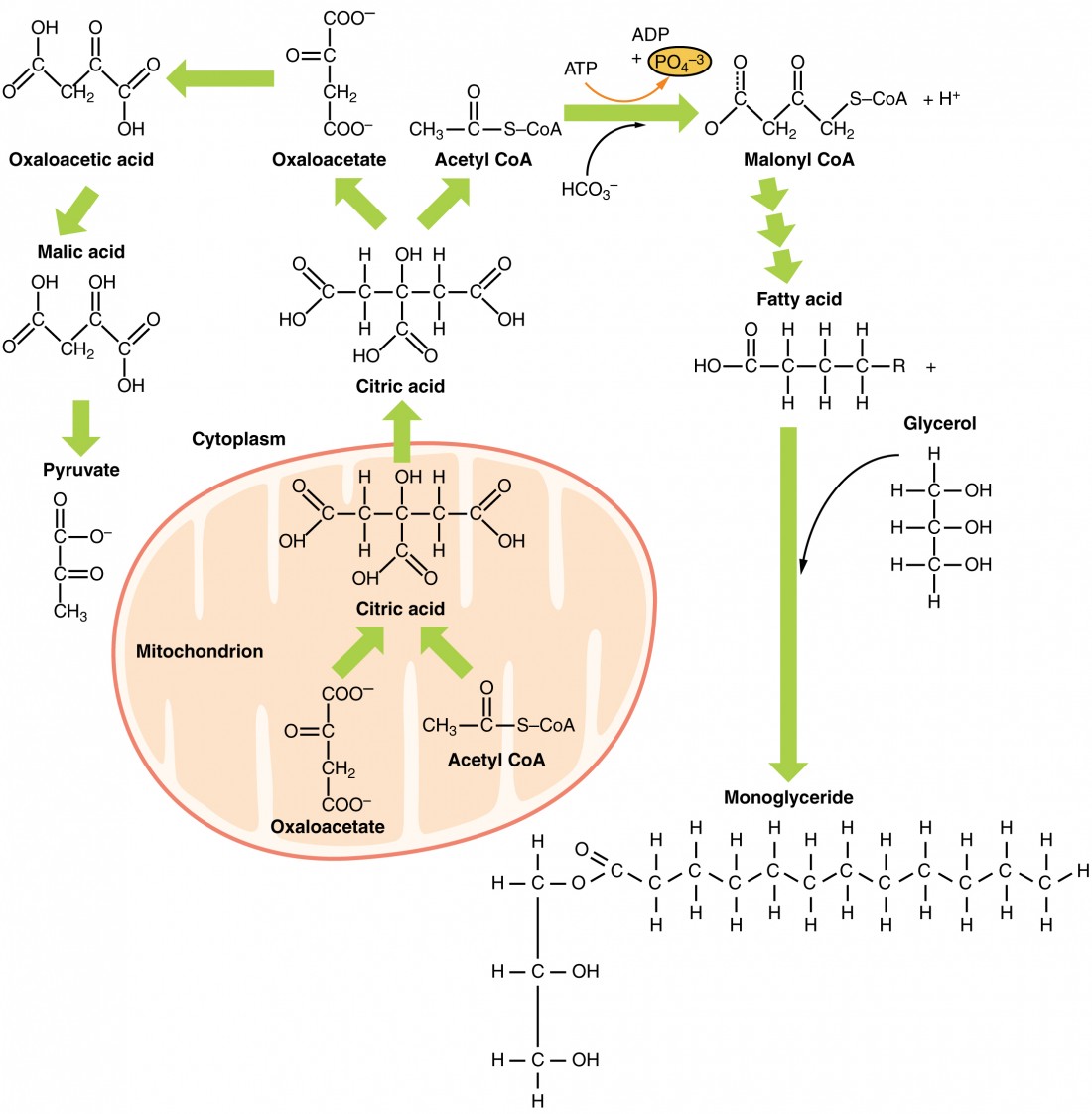 Lipids are available to the body from three sources. They can be ingested in the diet, stored in the adipose tissue of the body, or synthesized in the liver. Fats ingested in the diet are digested in the small intestine. The triglycerides are broken down into monoglycerides and free fatty acids, then imported across the intestinal mucosa. Once across, the triglycerides are resynthesized and transported to the liver or adipose tissue. Fatty acids are oxidized through fatty acid or β-oxidation into two-carbon acetyl CoA molecules, which can then enter the Krebs cycle to generate ATP. If excess acetyl CoA is created and overloads the capacity of the Krebs cycle, the acetyl CoA can be used to synthesize ketone bodies. When glucose is limited, ketone bodies can be oxidized and used for fuel. Excess acetyl CoA generated from excess glucose or carbohydrate ingestion can be used for fatty acid synthesis or lipogenesis. Acetyl CoA is used to create lipids, triglycerides, steroid hormones, cholesterol, and bile salts. Lipolysis is the breakdown of triglycerides into glycerol and fatty acids, making them easier for the body to process.

bile salts: salts that are released from the liver in response to lipid ingestion and surround the insoluble triglycerides to aid in their conversion to monoglycerides and free fatty acids

cholecystokinin (CCK): hormone that stimulates the release of pancreatic lipase and the contraction of the gallbladder to release bile salts

chylomicrons: vesicles containing cholesterol and triglycerides that transport lipids out of the intestinal cells and into the lymphatic and circulatory systems

hydroxymethylglutaryl CoA (HMG CoA): molecule created in the first step of the creation of ketone bodies from acetyl CoA

ketone bodies: alternative source of energy when glucose is limited, created when too much acetyl CoA is created during fatty acid oxidation

lipogenesis: synthesis of lipids that occurs in the liver or adipose tissues

lipolysis: breakdown of triglycerides into glycerol and fatty acids

pancreatic lipases: enzymes released from the pancreas that digest lipids in the diet