Metabolic processes are constantly taking place in the body. Metabolism is the sum of all of the chemical reactions that are involved in catabolism and anabolism. The reactions governing the breakdown of food to obtain energy are called catabolic reactions. Conversely, anabolic reactions use the energy produced by catabolic reactions to synthesize larger molecules from smaller ones, such as when the body forms proteins by stringing together amino acids. Both sets of reactions are critical to maintaining life.

Catabolic reactions break down large organic molecules into smaller molecules, releasing the energy contained in the chemical bonds. These energy releases (conversions) are not 100 percent efficient. The amount of energy released is less than the total amount contained in the molecule. Approximately 40 percent of energy yielded from catabolic reactions is directly transferred to the high-energy molecule adenosine triphosphate (ATP). ATP, the energy currency of cells, can be used immediately to power molecular machines that support cell, tissue, and organ function. This includes building new tissue and repairing damaged tissue. ATP can also be stored to fulfill future energy demands. The remaining 60 percent of the energy released from catabolic reactions is given off as heat, which tissues and body fluids absorb.

Structurally, ATP molecules consist of an adenine, a ribose, and three phosphate groups. The chemical bond between the second and third phosphate groups, termed a high-energy bond, represents the greatest source of energy in a cell. It is the first bond that catabolic enzymes break when cells require energy to do work. The products of this reaction are a molecule of adenosine diphosphate (ADP) and a lone phosphate group (Pi). ATP, ADP, and Pi are constantly being cycled through reactions that build ATP and store energy, and reactions that break down ATP and release energy. 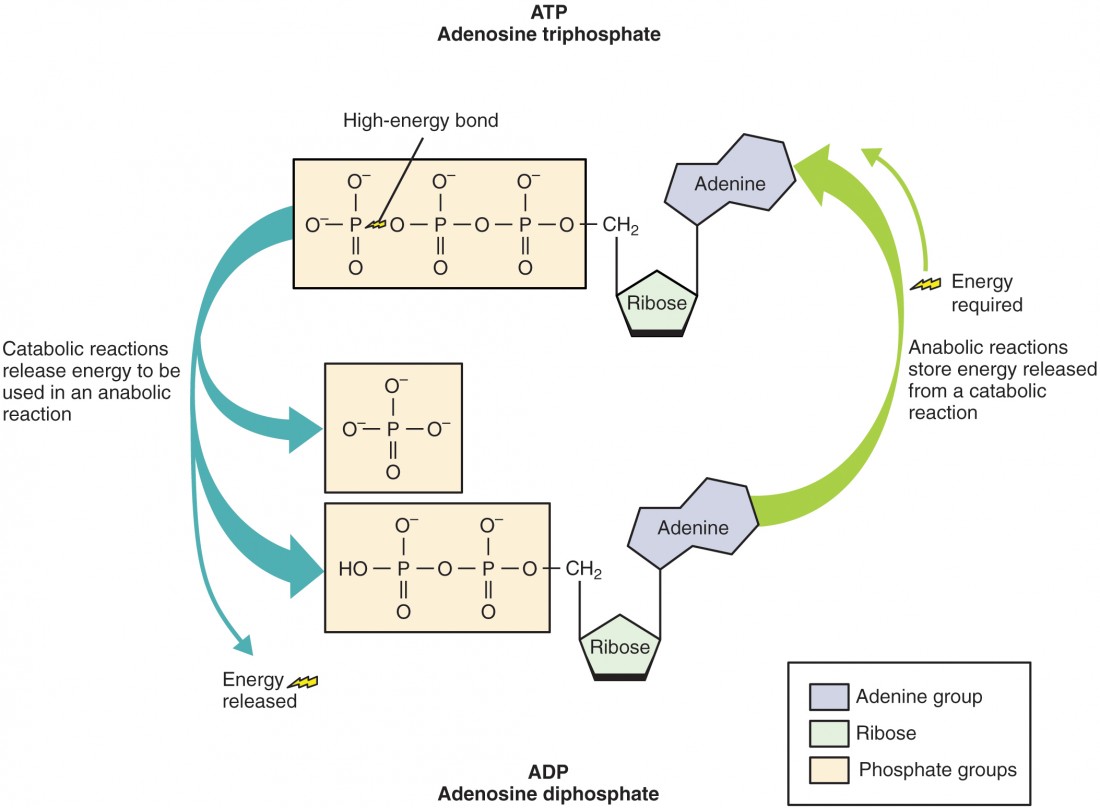 Figure 1. Adenosine triphosphate (ATP) is the energy molecule of the cell. During catabolic reactions, ATP is created and energy is stored until needed during anabolic reactions.

The energy from ATP drives all bodily functions, such as contracting muscles, maintaining the electrical potential of nerve cells, and absorbing food in the gastrointestinal tract. The metabolic reactions that produce ATP come from various sources. 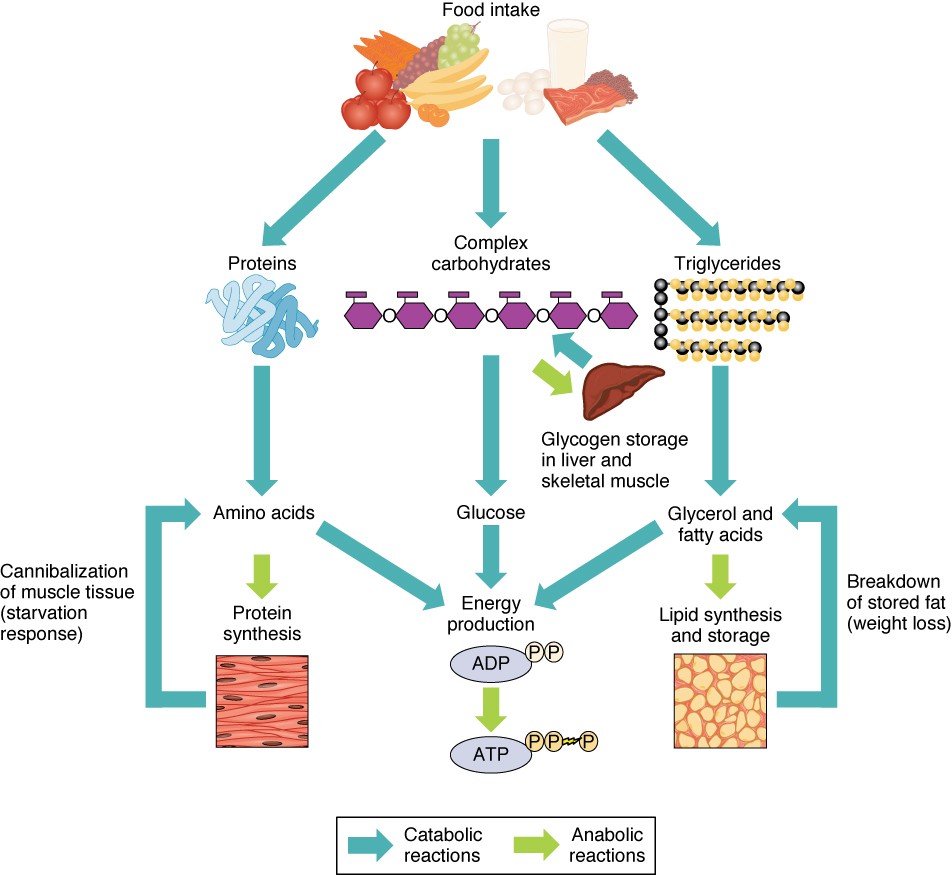 Of the four major macromolecular groups (carbohydrates, lipids, proteins, and nucleic acids) that are processed by digestion, carbohydrates are considered the most common source of energy to fuel the body. They take the form of either complex carbohydrates, polysaccharides like starch and glycogen, or simple sugars (monosaccharides) like glucose and fructose. Sugar catabolism breaks polysaccharides down into their individual monosaccharides. Among the monosaccharides, glucose is the most common fuel for ATP production in cells, and as such, there are a number of endocrine control mechanisms to regulate glucose concentration in the bloodstream. Excess glucose is either stored as an energy reserve in the liver and skeletal muscles as the complex polymer glycogen, or it is converted into fat (triglyceride) in adipose cells (adipocytes).

Proteins, which are polymers, can be broken down into their monomers, individual amino acids. Amino acids can be used as building blocks of new proteins or broken down further for the production of ATP. When one is chronically starving, this use of amino acids for energy production can lead to a wasting away of the body, as more and more proteins are broken down.

Nucleic acids are present in most of the foods you eat. During digestion, nucleic acids including DNA and various RNAs are broken down into their constituent nucleotides. These nucleotides are readily absorbed and transported throughout the body to be used by individual cells during nucleic acid metabolism.

Disorders of the Metabolic Processes: Cushing Syndrome and Addison’s Disease

As might be expected for a fundamental physiological process like metabolism, errors or malfunctions in metabolic processing lead to a pathophysiology or—if uncorrected—a disease state. Metabolic diseases are most commonly the result of malfunctioning proteins or enzymes that are critical to one or more metabolic pathways. Protein or enzyme malfunction can be the consequence of a genetic alteration or mutation. However, normally functioning proteins and enzymes can also have deleterious effects if their availability is not appropriately matched with metabolic need. For example, excessive production of the hormone cortisol  gives rise to Cushing syndrome. Clinically, Cushing syndrome is characterized by rapid weight gain, especially in the trunk and face region, depression, and anxiety. It is worth mentioning that tumors of the pituitary that produce adrenocorticotropic hormone (ACTH), which subsequently stimulates the adrenal cortex to release excessive cortisol, produce similar effects. This indirect mechanism of cortisol overproduction is referred to as Cushing disease.

Patients with Cushing syndrome can exhibit high blood glucose levels and are at an increased risk of becoming obese. They also show slow growth, accumulation of fat between the shoulders, weak muscles, bone pain (because cortisol causes proteins to be broken down to make glucose via gluconeogenesis), and fatigue. Other symptoms include excessive sweating (hyperhidrosis), capillary dilation, and thinning of the skin, which can lead to easy bruising. The treatments for Cushing syndrome are all focused on reducing excessive cortisol levels. Depending on the cause of the excess, treatment may be as simple as discontinuing the use of cortisol ointments. In cases of tumors, surgery is often used to remove the offending tumor. Where surgery is inappropriate, radiation therapy can be used to reduce the size of a tumor or ablate portions of the adrenal cortex. Finally, medications are available that can help to regulate the amounts of cortisol.

Insufficient cortisol production is equally problematic. Adrenal insufficiency, or Addison’s disease, is characterized by the reduced production of cortisol from the adrenal gland. It can result from malfunction of the adrenal glands—they do not produce enough cortisol—or it can be a consequence of decreased ACTH availability from the pituitary. Patients with Addison’s disease may have low blood pressure, paleness, extreme weakness, fatigue, slow or sluggish movements, lightheadedness, and salt cravings due to the loss of sodium and high blood potassium levels (hyperkalemia). Victims also may suffer from loss of appetite, chronic diarrhea, vomiting, mouth lesions, and patchy skin color. Diagnosis typically involves blood tests and imaging tests of the adrenal and pituitary glands. Treatment involves cortisol replacement therapy, which usually must be continued for life.

The chemical reactions underlying metabolism involve the transfer of electrons from one compound to another by processes catalyzed by enzymes. The electrons in these reactions commonly come from hydrogen atoms, which consist of an electron and a proton. A molecule gives up a hydrogen atom, in the form of a hydrogen ion (H+) and an electron, breaking the molecule into smaller parts. The loss of an electron, or oxidation, releases a small amount of energy; both the electron and the energy are then passed to another molecule in the process of reduction, or the gaining of an electron. These two reactions always happen together in an oxidation-reduction reaction (also called a redox reaction)—when an electron is passed between molecules, the donor is oxidized and the recipient is reduced. Oxidation-reduction reactions often happen in a series, so that a molecule that is reduced is subsequently oxidized, passing on not only the electron it just received but also the energy it received. As the series of reactions progresses, energy accumulates that is used to combine Pi and ADP to form ATP, the high-energy molecule that the body uses for fuel.

Oxidation-reduction reactions are catalyzed by enzymes that trigger the removal of hydrogen atoms. Coenzymes work with enzymes and accept hydrogen atoms. The two most common coenzymes of oxidation-reduction reactions are nicotinamide adenine dinucleotide (NAD) and flavin adenine dinucleotide (FAD). Their respective reduced coenzymes are NADH and FADH2, which are energy-containing molecules used to transfer energy during the creation of ATP.

Catabolic reactions break down larger molecules, such as carbohydrates, lipids, and proteins from ingested food, into their constituent smaller parts. They also include the breakdown of ATP, which releases the energy needed for metabolic processes in all cells throughout the body.

Anabolic reactions, or biosynthetic reactions, synthesize larger molecules from smaller constituent parts, using ATP as the energy source for these reactions. Anabolic reactions build bone, muscle mass, and new proteins, fats, and nucleic acids. Oxidation-reduction reactions transfer electrons across molecules by oxidizing one molecule and reducing another, and collecting the released energy to convert Pi and ADP into ATP. Errors in metabolism alter the processing of carbohydrates, lipids, proteins, and nucleic acids, and can result in a number of disease states.

catabolic hormones: hormones that stimulate the breakdown of larger molecules

catabolic reactions: reactions that break down larger molecules into their constituent parts

metabolism: sum of all catabolic and anabolic reactions that take place in the body

oxidation: loss of an electron

oxidation-reduction reaction: (also, redox reaction) pair of reactions in which an electron is passed from one molecule to another, oxidizing one and reducing the other

reduction: gaining of an electron