Now that you understand the development of mature, naïve B cells and T cells, and some of their major functions, how do all of these various cells, proteins, and cytokines come together to actually resolve an infection? Ideally, the immune response will rid the body of a pathogen entirely. The adaptive immune response, with its rapid clonal expansion, is well suited to this purpose. Think of a primary infection as a race between the pathogen and the immune system. The pathogen bypasses barrier defenses and starts multiplying in the host’s body. During the first 4 to 5 days, the innate immune response will partially control, but not stop, pathogen growth. As the adaptive immune response gears up, however, it will begin to clear the pathogen from the body, while at the same time becoming stronger and stronger. When following antibody responses in patients with a particular disease such as a virus, this clearance is referred to as seroconversion (sero– = “serum”). Seroconversion is the reciprocal relationship between virus levels in the blood and antibody levels. As the antibody levels rise, the virus levels decline, and this is a sign that the immune response is being at least partially effective (partially, because in many diseases, seroconversion does not necessarily mean a patient is getting well).

An excellent example of this is seroconversion during HIV disease. Notice that antibodies are made early in this disease, and the increase in anti-HIV antibodies correlates with a decrease in detectable virus in the blood. Although these antibodies are an important marker for diagnosing the disease, they are not sufficient to completely clear the virus. Several years later, the vast majority of these individuals, if untreated, will lose their entire adaptive immune response, including the ability to make antibodies, during the final stages of AIDS. 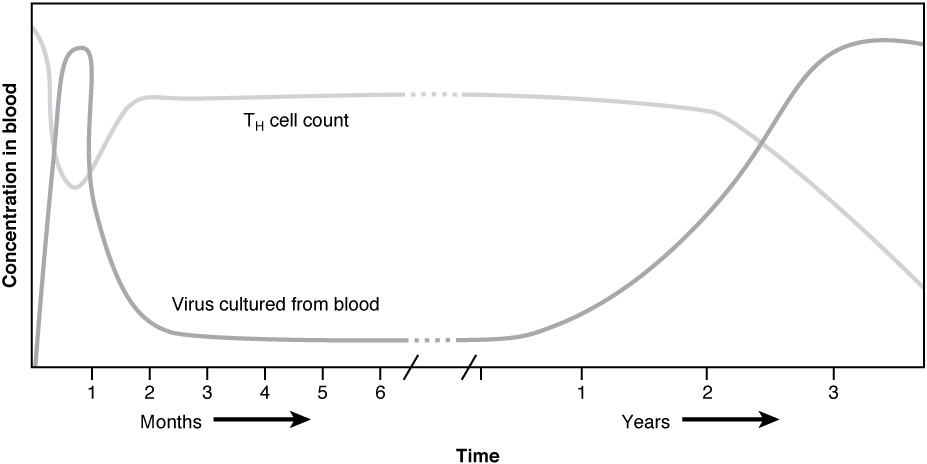 Figure 1. Seroconversion, the rise of anti-HIV antibody levels and the concomitant decline in measurable virus levels, happens during the first several months of HIV disease. Unfortunately, this antibody response is ineffective at controlling the disease, as seen by the progression of the disease towards AIDS, in which all adaptive immune responses are compromised.

Immune responses in some mucosal tissues such as the Peyer’s patches (see Figure 10 in Anatomy of the Lymphatic and Immune Systems) in the small intestine take up particulate antigens by specialized cells known as microfold or M cells (Figure 2). These cells allow the body to sample potential pathogens from the intestinal lumen. Dendritic cells then take the antigen to the regional lymph nodes, where an immune response is mounted. 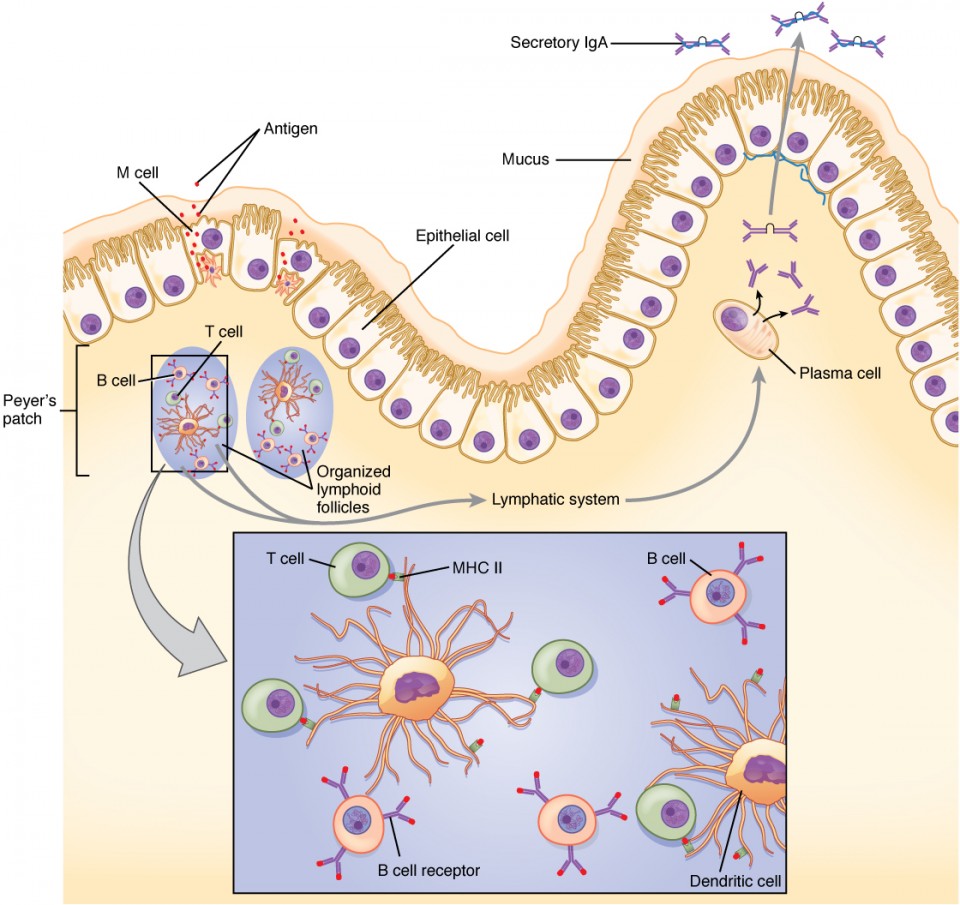 The primary mechanisms against viruses are NK cells, interferons, and cytotoxic T cells. Antibodies are effective against viruses mostly during protection, where an immune individual can neutralize them based on a previous exposure. Antibodies have no effect on viruses or other intracellular pathogens once they enter the cell, since antibodies are not able to penetrate the plasma membrane of the cell. Many cells respond to viral infections by downregulating their expression of MHC class I molecules. This is to the advantage of the virus, because without class I expression, cytotoxic T cells have no activity. NK cells, however, can recognize virally infected class I-negative cells and destroy them. Thus, NK and cytotoxic T cells have complementary activities against virally infected cells.

Early childhood is a time when the body develops much of its immunological memory that protects it from diseases in adulthood. The components of the immune response that have the maximum effectiveness against a pathogen are often associated with the class of pathogen involved. Bacteria and fungi are especially susceptible to damage by complement proteins, whereas viruses are taken care of by interferons and cytotoxic T cells. Worms are attacked by eosinophils. Pathogens have shown the ability, however, to evade the body’s immune responses, some leading to chronic infections or even death. The immune system and pathogens are in a slow, evolutionary race to see who stays on top. Modern medicine, hopefully, will keep the results skewed in humans’ favor.

neutralization: inactivation of a virus by the binding of specific antibody

seroconversion: clearance of pathogen in the serum and the simultaneous rise of serum antibody