Fibulae (singular: fibula) are brooches that were made popular by Roman military campaigns. They all consist of a body, a pin, and a catch. Ornate fibulae became all the rage in the early middle ages, and are one of the most commonly found objects in barbarian[1] grave sites. Grave goods like fibulae provide the most concrete cultural information about barbarians, due to the sparse amount of written documentation about them. The diverse ethnic groups were constantly borrowing from one another, while putting their own spin on things.

The example seen in figure 1 was a very popular style of fibula, and is called a “crossbow” fibula because of its resemblance to the weapon. Unscrewing the left knob at the end of this “crossbow” would release the pin, which is visible in this photograph. The detailed incising on the body is called pierced openwork, and bears a Christian cross amongst a circular leaf motif. The Byzantines were a part of the eastern Roman empire, their capital being Constantinople. Their empire was a continuation of the Roman empire during the middle ages, while the majority of modern-day Italy was overtaken by barbarian tribes. Although precious and intricate, it is a relatively simple design, indicative of the Byzantine/Roman fibulae style. 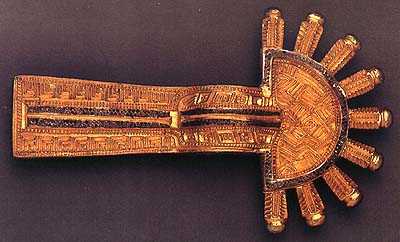 The Lombardic piece in figure 2 provides a good comparison, because it is a stylized variation of the crossbow fibula. It is gilded and inlaid with niello, a black metal alloy. The incisions are hatched lines, a popular decoration technique in Lombardic fibulae. The Lombards (or Langobards, from the Latin Langobardi) are thought to be of Germanic origin, although their background is still contested. They established their kingdom in Italy in 558 by conquering Byzantine land, and were defeated themselves by Charlemagne, king of the Franks, in 774. Over these centuries they assimilated into Roman culture, adopting Catholicism, and left their own administrative legal procedures behind. This piece shows the adoption of the crossbow fibula style, but with a small Lombardic “twist.” 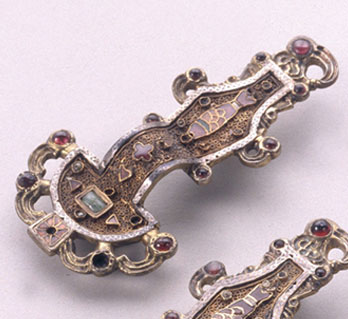 The pair of Frankish fibulae in figure 3 is a great example of cloisonné, a technique that was popular in barbarian art. This technique is characterized by inlaid semi-precious stones. In fact, the word cloisonné literally means “partitioned” in French. The artisan would solder wires onto a metal base and fill the areas those wires created with stones (to be distinguished with cloisonné enamel, which has colored enamel baked within these partitions). This example also shows a popular motif in barbarian art of the middle ages: eagles! The eagle, originally a pagan symbol of the sun, was used by Imperial Rome, and would later become an emblem to St. John. The end of these fibulae are in the shape of Eagle heads, and little fish are shown on the main body of the brooches. Garnets were used to decorate the eyes of the eagles, and a wide range of gems were used to decorate the rest of the fibulae. These stunning pieces demonstrate the proficiency of barbarian metal workers during the middle ages. 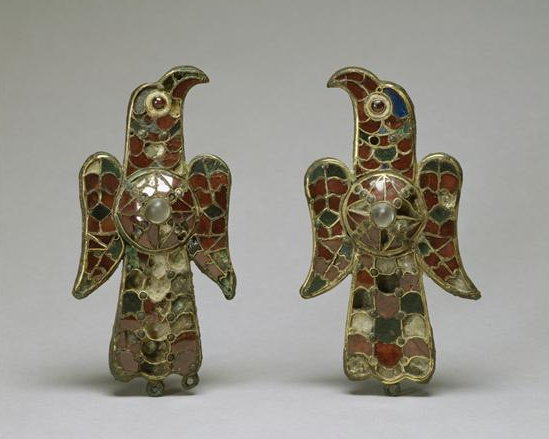 The pair of Visigothic fibulae in figure 4 is another great example of barbarian metalwork and cloisonné. These were decorated with garnets, amethyst, and colored glass. Pendants could have been hung from the small loops on the bottom on each fibulae. It is easy to see how these ornate fibulae are different from the Byzantine example discussed earlier. This pair was found at a Visigothic grave site in Spain, and were made over a century later than the Byzantine crossbow fibula. While both examples are fibulae and had the same functional purpose, the way in which they were decorated differed because of the culture producing them.

After all, when commissioning such expensive objects, the owners are going to want an object that resonates with their identity. For such a widespread object as the fibula, it is normal for similar groups to have similar artistic styles, and for more diverse groups to have less in common. These extraordinary examples of fibulae are proof of the diverse and distinct cultures living within larger empires and kingdoms, a social situation that was common during the middle ages.