The oldest known representational imagery comes from the Aurignacian culture of the Upper Paleolithic period. Archeological discoveries across a broad swath of Europe (especially Southern France, Northern Spain, and Swabia, in Germany) include over two hundred caves with spectacular Aurignacian paintings, drawings and sculpture that are among the earliest undisputed examples of representational image-making. The oldest of these is a 2.4-inch tall female figure carved out of mammoth ivory that was found in six fragments in the Hohle Fels cave near Schelklingen in southern Germany. It dates to 35,000 BCE.

A carved female figurine dating to at least 35,000 years ago has been recovered from caves in the Hohle Fels region of Germany. The figure represents the oldest figurative art yet discovered. In this film the authors describe the importance of their find.

The caves at Chauvet-Pont-d’Arc (see figure 1), Lascaux, Pech Merle, and Altamira contain the best known examples of pre-historic painting and drawing. Here are remarkably evocative renderings of animals and some humans that employ a complex mix of naturalism and abstraction. Archeologists that study Paleolithic (old stone age) era humans, believe that the paintings discovered in 1994, in the cave at Chauvet-Pont-d’Arc in the Ardèche valley in France, are more than 30,000 years old. The images found at Lascaux and Altamira are more recent, dating to approximately 15,000 BCE. The paintings at Pech Merle date to both 25,000 and 15,000 BCE. 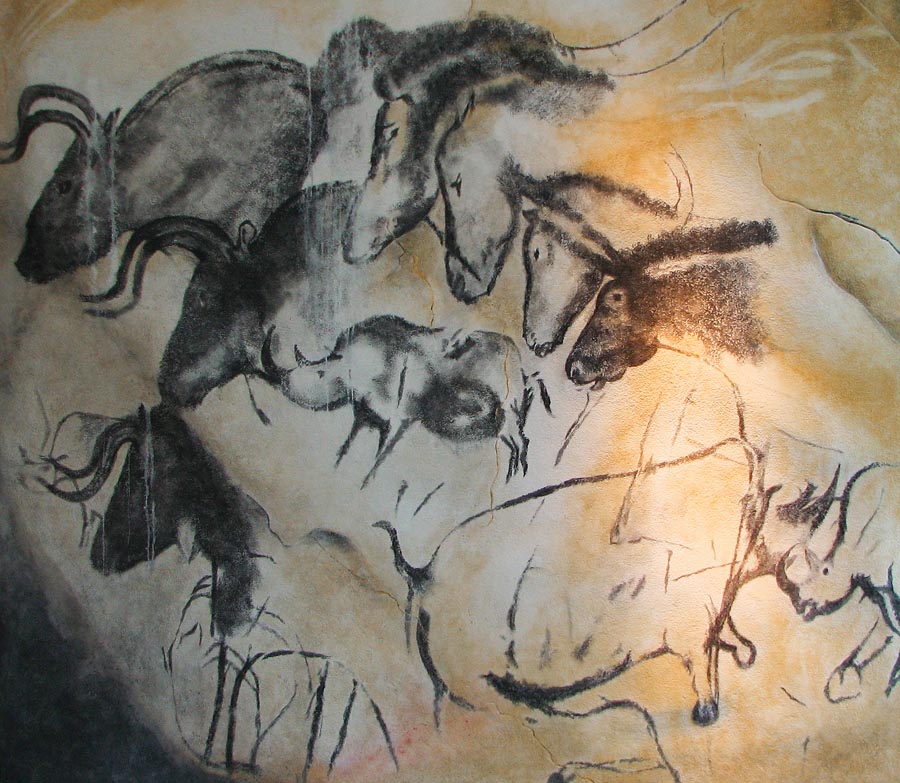 What can we really know about the creators of these paintings and what the images originally meant? These are questions that are difficult enough when we study art made only 500 years ago. It is much more perilous to assert meaning for the art of people who shared our anatomy but had not yet developed the cultures or liguistic structures that shaped who we have become. Do the tools of art history even apply? Here is evidence of a visual language that collapses the more than 1,000 generations that separate us, but we must be cautious. This is especially so if we want understand the people that made this art as a way to understand ourselves. The desire to speculate based on what we see and the physical evidence of the caves is wildly seductive.