The opulent interior of the Constantinian basilicas would have created an effective space for increasingly elaborate rituals. Influenced by the splendor of the rituals associated with the emperor, the liturgy placed emphasis on the dramatic entrances and the stages of the rituals. For example, the introit or entrance of the priest into the church was influenced by the adventusor arrival of the emperor.

The culmination of the entrance as well as the focal point of the architecture was the apse. It was here that the sacraments would be performed, and it was here that the priest would proclaim the word. In Roman civic and imperial basilicas, the apse had been the seat of authority. In the civic basilicas this is where the magistrate would sit adjacent to an imperial image and dispense judgment. In the imperial basilicas, the emperor would be enthroned. These associations with authority made the apse a suitable stage for the Christian rituals. The priest would be like the magistrate proclaiming the word of a higher authority.

A late fourth century mosaic in the apse of the Roman church of Santa Pudenziana visualizes this. We see in figure 1 a dramatic transformation in the conception of Christ from the pre-Constantinian period. 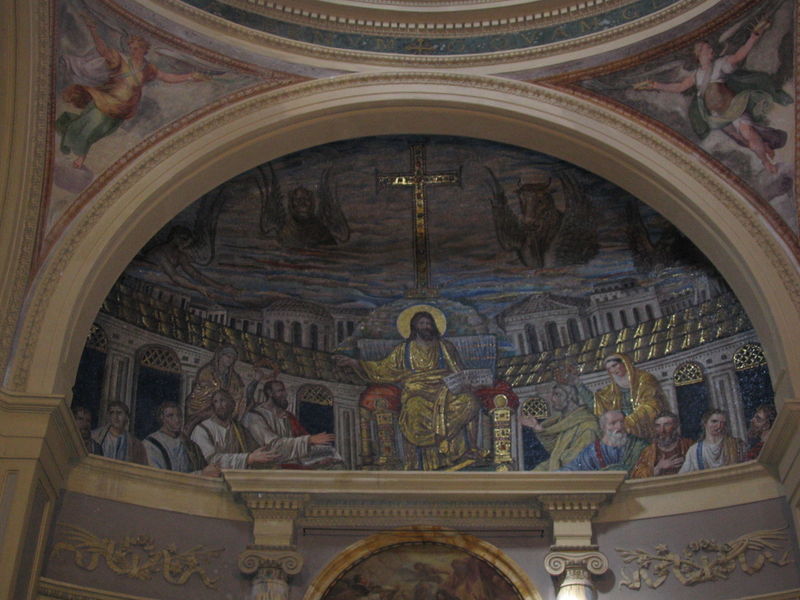 From Teacher to the Ruler of Heaven

In the Santa Pudenziana mosaic, Christ is shown in the center seated on a jewel-encrusted throne. He wears a gold toga with purple trim, both colors associated with imperial authority. His right hand is extended in the ad locutio gesture conventional in imperial representations. Holding a book in his right hand, Christ is shown proclaiming the word. This is dependent on another convention of Roman imperial art of the so-called traditio legis, or the handing down of the law. A silver plate made for the Emperor Theodosius in 388 to mark the tenth anniversary of his accession to power shows the Emperor in the center handing down the scroll of the law. Notably the Emperor Theodosius is shown with a halo much like the figure of Christ.

While the halo would become a standard convention in Christian art to demarcate sacred figures, the origins of this convention can be found in imperial representations like the image of Theodosius. Behind the figure of Christ appears an elaborate city. In the center appears a hill surmounted by a jewel-encrusted Cross. This identifies the city as Jerusalem and the hill as Golgotha, but this is not the earthly city but rather the heavenly Jerusalem. This is made clear by the four figures seen hovering in the sky around the Cross. These are identifiable as the four beasts that are described as accompanying the lamb in the Book of Revelation. The winged man, the winged lion, the winged ox, and the eagle became in Christian art symbols for the Four Evangelists, but in the context of the Santa Pudenziana mosaic, they define the realm as outside earthly time and space or as the heavenly realm. Christ is thus represented as the ruler of the heavenly city. The cross has become a sign the triumph of Christ. This mosaic finds a clear echo in the following excerpt from the writings of the early Christian theologian, St. John Chrysostom:

You will see the king, seated on the throne of that unutterable glory, together with the angels and archangels standing beside him, as well as the countless legions of the ranks of the saints. This is how the Holy City appears. . . . In this city is towering the wonderful and glorious sign of victory, the Cross, the victory booty of Christ, the first fruit of our human kind, the spoils of war of our king.

The language of this passage shows the unmistakable influence of the Roman emphasis on triumph. The Cross is characterized as a trophy or victory monument. Christ is conceived of as a warrior king. The order of the heavenly realm is characterized as like the Roman army divided up into legions. Both the text and mosaic reflect the transformation in the conception of Christ. These document the merging of Christianity with Roman imperial authority.

It is this aura of imperial authority that distinguishes the Santa Pudenziana mosaic from the painting of Christ and his disciples from the Catacomb of Domitilla, Christ in the catacomb painting is simply a teacher, while in the mosaic Christ has been transformed into the ruler of heaven. Even his long flowing beard and hair construct Christ as being like Zeus or Jupiter. The mosaic makes clear that all authority comes from Christ. He delegates that authority to his flanking apostles. It is significant that in the Santa Pudenziana mosaic the figure of Christ is flanked by the figure of St. Paul on the left and the figure of St. Peter on the right. These are the principal apostles.

By the fourth century, it was already established that the Bishop of Rome, or the Pope, was the successor of St. Peter, the founder of the Church of Rome. Just as power descends from Christ through the apostles, so at the end of time that power will be returned to Christ. The standing female figures can be identified as personifications of the major division of Christianity between church of the Jews and that of the Gentiles. They can be seen as offering up their crowns to Christ like the 24 Elders are described as returning their crowns in the Book of Revelation. 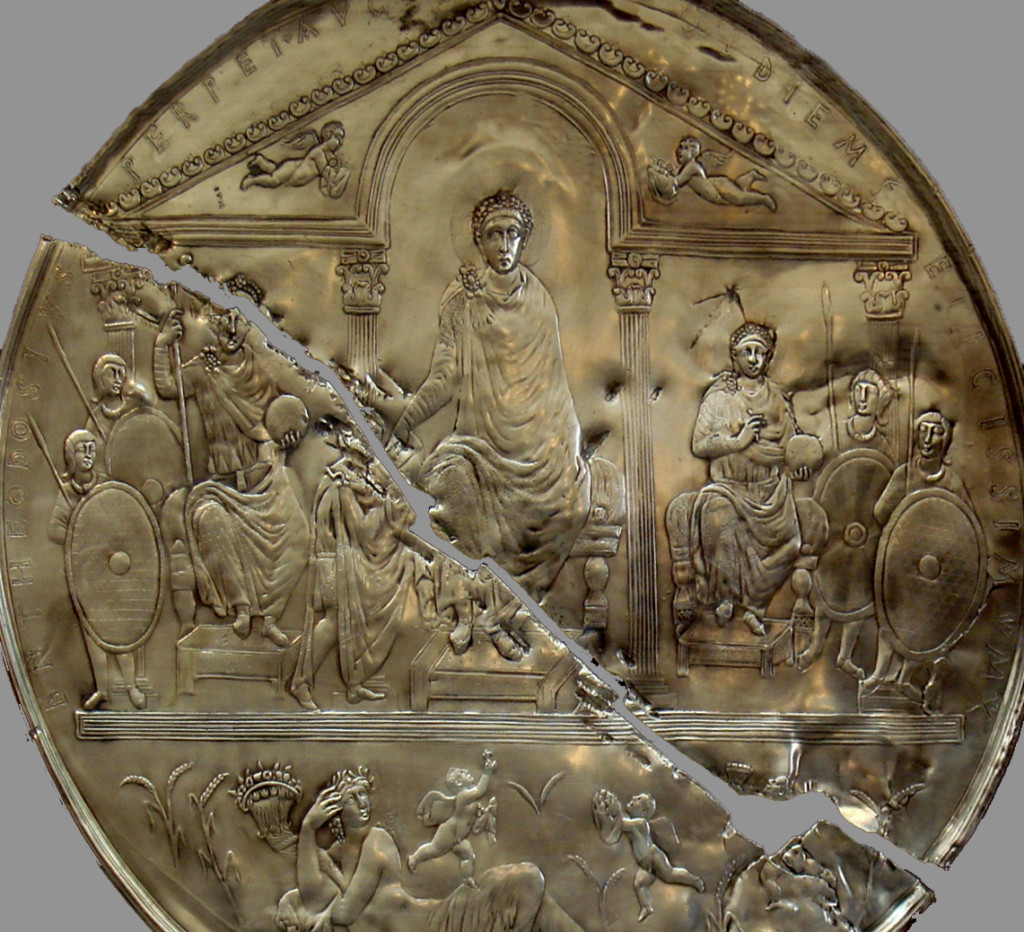 The meaning is clear that all authority comes from Christ just as in the Missorium of Theodosius which shows the transmission of authority from the Emperor to his co-emperors. This emphasis on authority should be understood in the context of the religious debates of the period. When Constantine accepted Christianity, there was not one Christianity but a wide diversity of different versions. A central concern for Constantine was the establishment of Christian orthodoxy in order to unify the church. 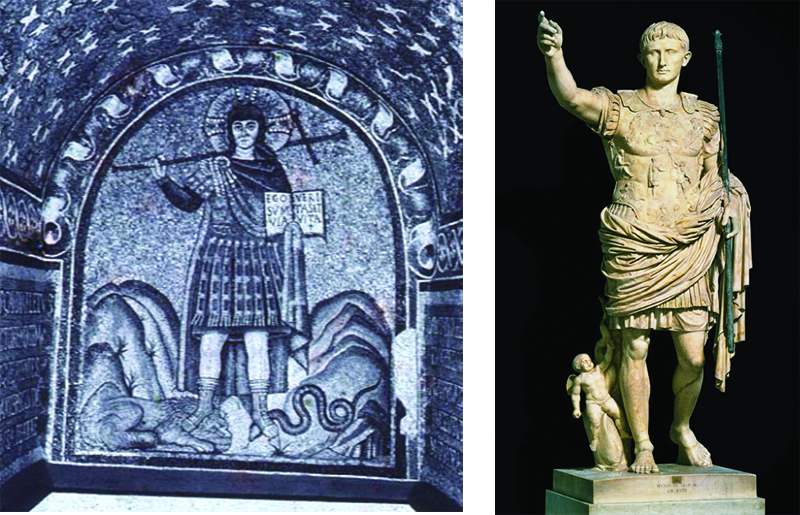 Figure 3. (left) Christ Treading on the Lion and Asp, mosaic from the Archepiscopal Palace in Ravenna late fifth century; (right) Augustus of Primaporta, 13 BCE to 15 CE

Christianity underwent a fundamental transformation with its acceptance by Constantine. The imagery of Christian art before Constantine appealed to the believer’s desires for personal salvation, while the dominant themes of Christian art after Constantine emphasized the authority of Christ and His church in the world. Just as Rome became Christian, Christianity and Christ took on the aura of Imperial Rome. A dramatic example of this is presented by a mosaic of Christ in the Archepiscopal palace in Ravenna. Here Christ is shown wearing the cuirass, or the breastplate, regularly depicted in images of Roman Emperors and generals. The staff of imperial authority has been transformed into the cross.