A Book of Beasts 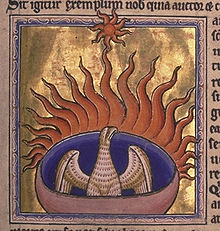 Figure 1. The phoenix from folio 56 recto of the Aberdeen Bestiary, written and illuminated in England around 1200. The Bestiary describes this magical bird as building its own funeral pyre and then rising from the ashes.

Have you ever heard that elephants are afraid of mice? Or that foxes are deceptive? These characterizations of animals come from a medieval book called the Bestiary, or Book of Beasts. Though these books are not known to many today, you are likely familiar with some of their content. The magical beasts in the Harry Potter series come directly from medieval bestiaries. Descriptions of unicorns, phoenixes, basilisks, and centaurs are all included in the text, but misspell “bestiary” in a Google search and you will likely regret it.

The Bestiary is a medieval encyclopedia that identifies a selection of animals, plants, and precious stones. Some really exist in nature and others do not. Each entry includes a physical description, an overview of the animal’s supposed characteristics, and a run-down of its moral qualities. Many versions of these books include illustrations. Its worth keeping in mind that Bestiaries pre-date the printing press. They were copied by hand at different times and places, resulting in a wide range of variations.

From a Christian Perspective 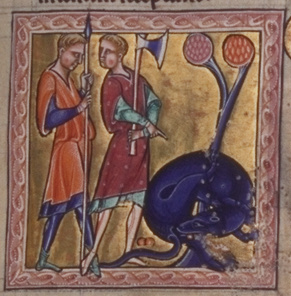 Figure 2. The beaver from folio 11 recto of the Aberdeen Bestiary, written and illuminated in England around 1200. The beaver shows off his testicles to escape the hunters.

The lack of scientific information in each entry makes them entertaining to read. For example, the Bestiary text describes the beaver as a gentle animal whose testicles are valued for their medicinal properties. If a beaver senses that he is being hunted, he will bite off his testicles and throw them to the hunter to save his own life. If a beaver has already done this and is hunted again, he will stand on his hind legs and show the hunter that his testicles are already missing and the hunter will let him go. The text then goes on to give a Christian moralization of the beaver, stating that “every man who heeds God’s commandment and wishes to live chastely should cut off all his vices and shameless acts, and cast them from him into the face of the devil.”[1]

The Bestiary text is made up of several components. The bulk of the text comes from the Physiologus, a second century Greek text by an anonymous author. Relevant comments by other ancient authors such as Aristotle, Herodotus, Pliny the Elder, and Aelian are also included. The Etymologiae of Isidore of Seville, the late fifth and sixth century Archbishop, constitute a significant portion of the text. Layers of Christian commentary and moralizations were added to those earlier texts. 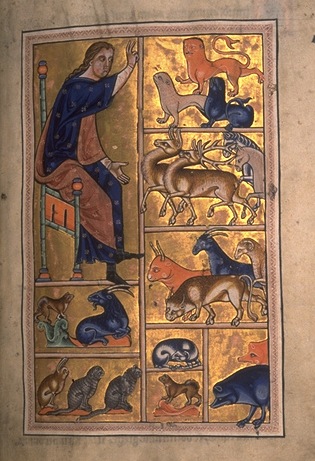 Figure 3. Adam names the animals from folio 5 recto of the Aberdeen Bestiary, written and illuminated in England around 1200.

The Bestiary begins with a retelling of the creation story from Genesis. An important event is Adam, the first man, naming all of the animals. This scene is often included in illustrated Bestiaries. Isidore of Seville believed that the names of animals were significant. He believed that an etymological study of each animal’s name would reveal something about the nature of each animal.

The content of the Bestiary, particularly the moralizations on the animals, is echoed in many medieval texts, from sermons to stories. Chaucer’s “Nun’s Priest’s Tale,” an animal story from the Canterbury Tales, makes use of the Bestiary. The main characters are a sly, deceptive fox and Chanticleer, a foolish and egotistical rooster.

The Bestiary was an enormously popular book in the Middle Ages and more than 130 medieval copies survive today. These copies come from all over Western Europe. The earliest manuscripts date from the tenth century and many survive from the thirteenth and fourteenth centuries. Many illustrations were drawn by artists who had never seen the relevant animal, but used the physical descriptions as a guide. The Bestiary text was influential, but these portable illustrations of animals were equally influential and likely served as models for animals in other manuscript illustrations, stone carving, wall painting, stained glass, and other media.