Gauguin, Spirit of the Dead Watching 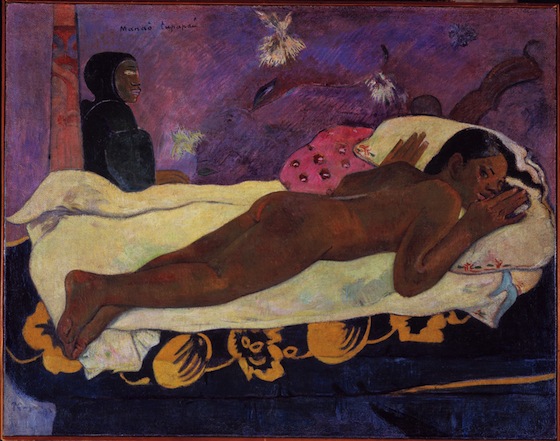 “Soyez mysterieuses”—be mysterious—Gauguin said. Perhaps he had this command in mind when he produced the most significant painting—by his own reckoning—to come out of his first stay in Tahiti, The Spirit of the Dead Watching. Few critics would doubt the importance of this work. Its mysteriousness and openness to interpretation has secured for it a position among Gauguin’s key works.

Gauguin made his first visit to Tahiti (a French colony) in March 1891, returning to Paris in May 1893. It was a hugely productive period in Gauguin’s career. “In the two years I have spent here,” he wrote, “with only a few months lost, I have produced sixty-six more or less fine canvases and a number of ultra-primitive sculptures. That is enough for any one man.”

A Background of Terror

To herald his return to Europe and also to rescue his family from penury, with the help of his Danish wife, Mette, Gauguin organized an exhibition of his work in Copenhagen. Among the nine canvases he sent from Tahiti was The Spirit of the Dead Watching, carrying with it an asking price—the most expensive in the sale—of between 1,500 and 2,000 francs. Clearly highly prized by Gauguin, the best of two years’ worth of “fine” canvases, the painting depicts an adolescent girl (the model was Gauguin’s Tahitian girlfriend Tehura, who was only fourteen years old), lying belly down on a bed, her face staring out at the viewer with a fearful expression. The bed is covered with a blue pareo (a wraparound skirt worn by Tahitians) and a light chrome-yellow sheet. Behind the bed, silhouetted and in profile, a woman watches over the child.

Gauguin created a haunting, supernatural quality by exploiting what he considered to be the emotional potential of color. When describing the painting to Mette, he points out how the shades of purple on the wall create “a background of terror” and how the sheet “must be yellow, because, in this colour, it arouses something unexpected for the spectator.” Using colors to arouse feelings was very much in line with the work of other Post-Impressionist artists, such as Gauguin’s contemporary and friend, Vincent van Gogh.

The Spirit of the Dead

Other formal features of the painting seem to enhance this ambivalence. Notice, for example, the complex vantage point we hold. Our gaze is level with the luminous eyes of the old woman, while at the same time, we look down at the figure of the young woman.

A Slightly Indecent Study of a Nude

We can also consider this painting within the tradition of the female nude and recall Manet’s Olympia (1865). Manet’s work provided a template for younger artists, one that rejected long-established conventions in the representation of the nude and challenged the moral values of the bourgeoisie. Gauguin, for one, admired Olympia enough to have produced a copy of it in 1891.

He was keen to shock the bourgeoisie and certainly his own nude in The Spirit of the Dead Watching—”a slightly indecent study” as he described it—is in many ways as radical as Manet’s. The body is awkwardly positioned and disproportionate. The feet overhang the bed and the hands are larger than the feet. And most shocking of all, is the age of the model. 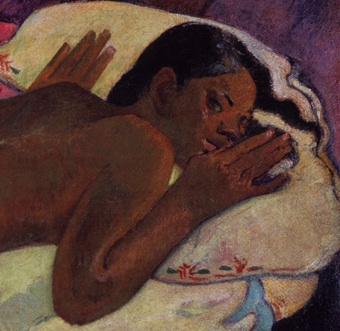 Equally disturbing is the fear she exhibits. Gauguin described this in letters to his wife, Mette. Having walked that day to a neighboring village, Gauguin didn’t return to his house until the early morning. On entering, he found Tehura naked on the bed staring at him in terror. The reason for her fear, according to Gauguin, was that Tehura believed in tupapaus, the spirits of the dead who in Tahitian mythology inhabit the interior of the island and whose presence illuminates the forest at night.

Gauguin was skeptical about this belief, holding that these phosphorescent night glows that Tahitians took for spirits were in fact a type of fungus that grows on dead trees. Either way, for Tehura, to walk through the interior after sundown risked disturbing the tupapaus with potentially disastrous consequences; hence her fear and so too those glimmering spectral forms that feature in the background of the painting and that Gauguin stated stood for the tupapaus themselves.

Given his construction of Tahitian culture as “primitive,” Gauguin’s version of these events has been scrutinized by art historians who have cast doubt on whether Tehura would have actually held these beliefs (since she was a practicing Christian). Gauguin is thus accused of projecting his own primitivist preconceptions onto his subject.

Another critique comes from the art historian, Nancy Mowll Mathews, who argues that it was not the spirits that Tehura was frightened of, but Gauguin himself, the middle-aged, white, male colonialist against whom, as a sexual predator, she had little power to resist. This reading gives a disturbing twist to the image with Gauguin taking sadistic pleasure in depicting the fear that he himself caused. It’s worth noting that in Gauguin’s account, seeing her in this state moved him to declare that she never looked so beautiful, and that he was drawn to comfort her, promising never to leave her again.

The critic Stephen Eisenman takes a different line of argument, describing the painting as “an assault upon the tradition of the European nude.” Of particular interest for Eisenman is the viewer’s uncertainty regarding the sex of the figure, the large hands and narrow hips suggesting a male rather than a female form. “The posture and anatomy of Tehura, which emphasizes her boyishness, is derived from various androgynous and hermaphroditic prototypes,” Eisenman argues, citing the Borghese Hermaphrodite as one of them. Seen in this light, the painting, far from being an image of patriarchal dominion over the colonized body, is instead a subversive attack on that patriarchy and all the gendered values that it maintains.

However we choose to look at the painting, it provokes endless questioning, in which we are forced to encounter the other, whether that be in terms of age, faith, gender, spirituality, ethnicity, sexuality, culture, whatever you will, it is a painting that explores the heterogeneous nature of identity,  asking profound questions as to who and what we are.