Another part of Einstein’s ideas about gravity can be tested as a way of checking the theory that underlies black holes. According to general relativity, the geometry of spacetime depends on where matter is located. Any rearrangement of matter—say, from a sphere to a sausage shape—creates a disturbance in spacetime. This disturbance is called a gravitational wave, and relativity predicts that it should spread outward at the speed of light. The big problem with trying to study such waves is that they are tremendously weaker than electromagnetic waves and correspondingly difficult to detect.

Proof from a Pulsar

We’ve had indirect evidence for some time that gravitational waves exist. In 1974, astronomers Joseph Taylor and Russell Hulse discovered a pulsar (with the designation PSR1913+16) orbiting another neutron star. Pulled by the powerful gravity of its companion, the pulsar is moving at about one-tenth the speed of light in its orbit.

According to general relativity, this system of stellar corpses should be radiating energy in the form of gravitational waves at a high enough rate to cause the pulsar and its companion to spiral closer together. If this is correct, then the orbital period should decrease (according to Kepler’s third law) by one ten-millionth of a second per orbit. Continuing observations showed that the period is decreasing by precisely this amount. Such a loss of energy in the system can be due only to the radiation of gravitational waves, thus confirming their existence. Taylor and Hulse shared the 1993 Nobel Prize in physics for this work.

Although such an indirect proof convinced physicists that gravitational waves exist, it is even more satisfying to detect the waves directly. What we need are phenomena that are powerful enough to produce gravitational waves with amplitudes large enough that we can measure them. Theoretical calculations suggest some of the most likely events that would give a burst of gravitational waves strong enough that our equipment on Earth could measure it:

For the last four decades, scientists have been developing an audacious experiment to try to detect gravitational waves from a source on this list. The US experiment, which was built with collaborators from the UK, Germany, Australia and other countries, is named LIGO (Laser Interferometer Gravitational-Wave Observatory). LIGO currently has two observing stations, one in Louisiana and the other in the state of Washington. The effects of gravitational waves are so small that confirmation of their detection will require simultaneous measurements by two widely separated facilities. Local events that might cause small motions within the observing stations and mimic gravitational waves—such as small earthquakes, ocean tides, and even traffic—should affect the two sites differently.

Each of the LIGO stations consists of two 4-kilometer-long, 1.2-meter-diameter vacuum pipes arranged in an L-shape. A test mass with a mirror on it is suspended by wire at each of the four ends of the pipes. Ultra-stable laser light is reflected from the mirrors and travels back and forth along the vacuum pipes (Figure 1). If gravitational waves pass through the LIGO instrument, then, according to Einstein’s theory, the waves will affect local spacetime—they will alternately stretch and shrink the distance the laser light must travel between the mirrors ever so slightly. When one arm of the instrument gets longer, the other will get shorter, and vice versa. 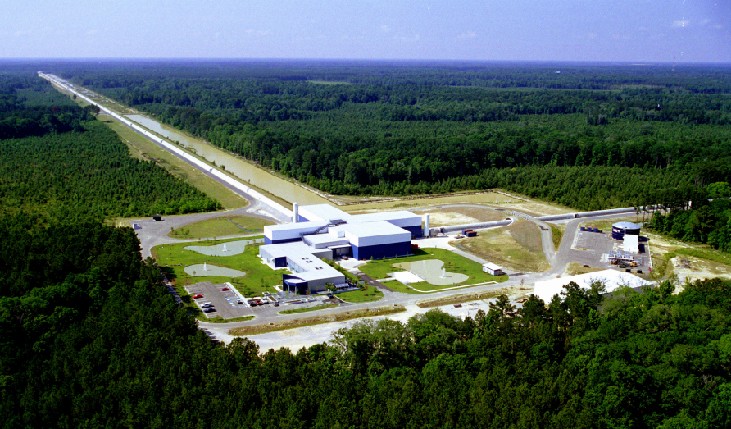 Figure 1. Gravitational Wave Telescope: An aerial view of the LIGO facility at Livingston, Louisiana. Extending to the upper left and far right of the image are the 4-kilometer-long detectors. (credit: modification of work by Caltech/MIT/LIGO Laboratory)

The challenge of this experiment lies in that phrase “ever so slightly.” In fact, to detect a gravitational wave, the change in the distance to the mirror must be measured with an accuracy of one ten-thousandth the diameter of a proton. In 1972, Rainer Weiss of MIT wrote a paper suggesting how this seemingly impossible task might be accomplished.

A great deal of new technology had to be developed, and work on the laboratory, with funding from the National Science Foundation, began in 1979. A full-scale prototype to demonstrate the technology was built and operated from 2002 to 2010, but the prototype was not expected to have the sensitivity required to actually detect gravitational waves from an astronomical source. Advanced LIGO, built to be more precise with the improved technology developed in the prototype, went into operation in 2015—and almost immediately detected gravitational waves.

What LIGO found was gravitational waves produced in the final fraction of a second of the merger of two black holes (Figure 2). The black holes had masses of 20 and 36 times the mass of the Sun, and the merger took place 1.3 billion years ago—the gravitational waves occurred so far away that it has taken that long for them, traveling at the speed of light, to reach us.

In the cataclysm of the merger, about three times the mass of the Sun was converted to energy (recall E = mc2). During the tiny fraction of a second for the merger to take place, this event produced power about 50 times the power produced by all the stars in the entire visible universe—but the power was all in the form of gravitational waves and hence was invisible to our instruments, except to LIGO. The event was recorded in Louisiana about 7 milliseconds before the detection in Washington—just the right distance given the speed at which gravitational waves travel—and indicates that the source was located somewhere in the southern hemisphere sky. Unfortunately, the merger of two black holes is not expected to produce any light, so this is the only observation we have of the event. 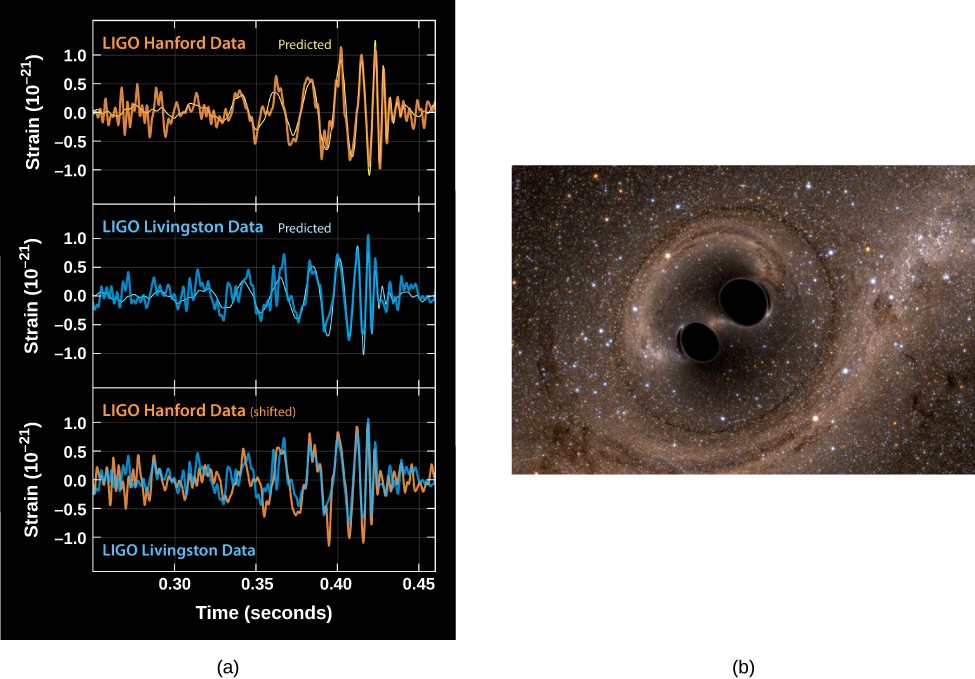 Figure 2. Signal Produced by a Gravitational Wave: (a) The top panel shows the signal measured at Hanford, Washington; the middle panel shows the signal measured at Livingston, Louisiana. The smoother thin curve in each panel shows the predicted signal, based on Einstein’s general theory of relativity, produced by the merger of two black holes. The bottom panel shows a superposition of the waves detected at the two LIGO observatories. Note the remarkable agreement of the two independent observations and of the observations with theory. (b) The painting shows an artist’s impression of two massive black holes spiraling inward toward an eventual merger. (credit a, b: modification of work by SXS)

This detection by LIGO (and another one of a different black hole merger a few months later) opens a whole new window on the universe. One of the experimenters compared the beginning of gravitational wave astronomy to the era when silent films were replaced by movies with sound (comparing the vibration of spacetime during the passing of a gravitational wave to the vibrations that sound makes).

We can now learn about events, such as the merger of black holes, that can be studied in no other way. For example, this first detected merger involved black holes with masses greater than previously observed for stellar-mass black holes. Such a discovery suggests that we may need to make changes to existing models of the evolution of massive stars.

Observing the merger of black holes via gravitational waves also means that we can now make tests of Einstein’s general theory of relativity where its effects are very strong—close to black holes—and not weak, as they are near Earth. One remarkable result from this first detection is that the signal measured matched so closely the theoretical predictions made using Einstein’s theory. Once again, Einstein’s revolutionary idea is found to be the correct description of nature.

Several facilities similar to LIGO are under construction in other countries to contribute to gravitational wave astronomy and help us pinpoint more precisely where in the sky the signals we detect come from. The European Space Agency (ESA) is also exploring the possibility of building an even larger detector for gravitational waves in space. The goal is to launch a facility called eLISA sometime in the mid 2030s. The design calls for three arms or paths, each a million kilometers in length, for the laser light to travel. This facility could detect the distant merger of supermassive black holes such as might have occurred when the first generation of stars formed only a few hundred million years after the Big Bang. In December 2015, ESA launched LISA Pathfinder to test the technology required to hold two gold-platinum cubes in a state of weightless, perfect rest relative one another. While LISA Pathfinder cannot itself detect gravitational waves, such stability will be required if eLISA is to be able to detect the small changes in path length produced by passing gravitational waves.

We should end by acknowledging that the ideas discussed in this chapter may seem strange and overwhelming, especially the first time you read them. The consequences of the general theory of relatively take some getting used to. But you have to admit that they make the universe more interesting and bizarre than you probably thought before you took this course.

General relativity predicts that the rearrangement of matter in space should produce gravitational waves. The existence of such waves was first confirmed in observations of a pulsar in orbit around another neutron star whose orbits were spiraling closer and losing energy in the form of gravitational waves. In 2015, LIGO found gravitational waves directly by detecting the signal produced by the merger of two stellar-mass black holes, opening a new window on the universe.

a disturbance in the curvature of spacetime caused by changes in how matter is distributed; gravitational waves propagate at (or near) the speed of light.