The technique for deriving the masses of galaxies is basically the same as that used to estimate the mass of the Sun, the stars, and our own Galaxy. We measure how fast objects in the outer regions of the galaxy are orbiting the center, and then we use this information along with Kepler’s third law to calculate how much mass is inside that orbit.

Astronomers can measure the rotation speed in spiral galaxies by obtaining spectra of either stars or gas, and looking for wavelength shifts produced by the Doppler effect. Remember that the faster something is moving toward or away from us, the greater the shift of the lines in its spectrum. Kepler’s law, together with such observations of the part of the Andromeda galaxy that is bright in visible light, for example, show it to have a galactic mass of about 4 × 1011MSun (enough material to make 400 billion stars like the Sun).

The total mass of the Andromeda galaxy is greater than this, however, because we have not included the mass of the material that lies beyond its visible edge. Fortunately, there is a handful of objects—such as isolated stars, star clusters, and satellite galaxies—beyond the visible edge that allows astronomers to estimate how much additional matter is hidden out there. Recent studies show that the amount of dark matter beyond the visible edge of Andromeda may be as large as the mass of the bright portion of the galaxy. Indeed, using Kepler’s third law and the velocities of its satellite galaxies, the Andromeda galaxy is estimated to have a mass closer to 1.4 × 1012MSun. The mass of the Milky Way Galaxy is estimated to be 8.5 × 1011MSun, and so our Milky Way is turning out to be somewhat smaller than Andromeda.

Elliptical galaxies do not rotate in a systematic way, so we cannot determine a rotational velocity; therefore, we must use a slightly different technique to measure their mass. Their stars are still orbiting the galactic center, but not in the organized way that characterizes spirals. Since elliptical galaxies contain stars that are billions of years old, we can assume that the galaxies themselves are not flying apart. Therefore, if we can measure the various speeds with which the stars are moving in their orbits around the center of the galaxy, we can calculate how much mass the galaxy must contain in order to hold the stars within it.

In practice, the spectrum of a galaxy is a composite of the spectra of its many stars, whose different motions produce different Doppler shifts (some red, some blue). The result is that the lines we observe from the entire galaxy contain the combination of many Doppler shifts. When some stars provide blueshifts and others provide redshifts, they create a wider or broader absorption or emission feature than would the same lines in a hypothetical galaxy in which the stars had no orbital motion. Astronomers call this phenomenon line broadening. The amount by which each line broadens indicates the range of speeds at which the stars are moving with respect to the center of the galaxy. The range of speeds depends, in turn, on the force of gravity that holds the stars within the galaxies. With information about the speeds, it is possible to calculate the mass of an elliptical galaxy.

Table 1 summarizes the range of masses (and other properties) of the various types of galaxies. Interestingly enough, the most and least massive galaxies are ellipticals. On average, irregular galaxies have less mass than spirals.

A useful way of characterizing a galaxy is by noting the ratio of its mass (in units of the Sun’s mass) to its light output (in units of the Sun’s luminosity). This single number tells us roughly what kind of stars make up most of the luminous population of the galaxy, and it also tells us whether a lot of dark matter is present. For stars like the Sun, the mass-to-light ratio is 1 by our definition.

Galaxies are not, of course, composed entirely of stars that are identical to the Sun. The overwhelming majority of stars are less massive and less luminous than the Sun, and usually these stars contribute most of the mass of a system without accounting for very much light. The mass-to-light ratio for low-mass stars is greater than 1 (you can verify this using the data in Table 2 of The H-R Diagram). Therefore, a galaxy’s mass-to-light ratio is also generally greater than 1, with the exact value depending on the ratio of high-mass stars to low-mass stars.

But these figures refer only to the inner, conspicuous parts of galaxies (Figure 1). In The Milky Way Galaxy and above, we discussed the evidence for dark matter in the outer regions of our own Galaxy, extending much farther from the galactic center than do the bright stars and gas. Recent measurements of the rotation speeds of the outer parts of nearby galaxies, such as the Andromeda galaxy we discussed earlier, suggest that they too have extended distributions of dark matter around the visible disk of stars and dust. This largely invisible matter adds to the mass of the galaxy while contributing nothing to its luminosity, thus increasing the mass-to-light ratio. If dark invisible matter is present in a galaxy, its mass-to-light ratio can be as high as 100. The two different mass-to-light ratios measured for various types of galaxies are given in Table 1. 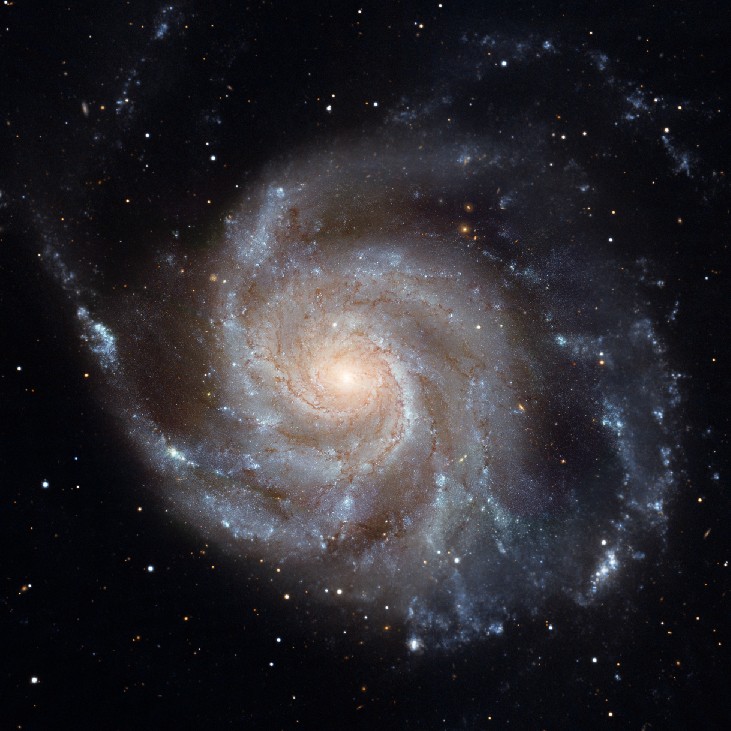 These measurements of other galaxies support the conclusion already reached from studies of the rotation of our own Galaxy—namely, that most of the material in the universe cannot at present be observed directly in any part of the electromagnetic spectrum. An understanding of the properties and distribution of this invisible matter is crucial to our understanding of galaxies. It’s becoming clearer and clearer that, through the gravitational force it exerts, dark matter plays a dominant role in galaxy formation and early evolution. There is an interesting parallel here between our time and the time during which Edwin Hubble was receiving his training in astronomy. By 1920, many scientists were aware that astronomy stood on the brink of important breakthroughs—if only the nature and behavior of the nebulae could be settled with better observations. In the same way, many astronomers today feel we may be closing in on a far more sophisticated understanding of the large-scale structure of the universe—if only we can learn more about the nature and properties of dark matter. If you follow astronomy articles in the news (as we hope you will), you should be hearing more about dark matter in the years to come.

mass-to-light ratio: the ratio of the total mass of a galaxy to its total luminosity, usually expressed in units of solar mass and solar luminosity; the mass-to-light ratio gives a rough indication of the types of stars contained within a galaxy and whether or not substantial quantities of dark matter are present