Structure and Function of Plasma Membrane

Plasma membranes must allow certain substances to enter and leave a cell, while preventing harmful material from entering and essential material from leaving. In other words, plasma membranes are selectively permeable—they allow some substances through but not others. If they were to lose this selectivity, the cell would no longer be able to sustain itself, and it would be destroyed. Some cells require larger amounts of specific substances than do other cells; they must have a way of obtaining these materials from the extracellular fluids. This may happen passively, as certain materials move back and forth, or the cell may have special mechanisms that ensure transport. Most cells expend most of their energy, in the form of adenosine triphosphate (ATP), to create and maintain an uneven distribution of ions on the opposite sides of their membranes. The structure of the plasma membrane contributes to these functions, but it also presents some problems.

Plasma membranes are asymmetric, meaning that despite the mirror image formed by the phospholipids, the interior of the membrane is not identical to the exterior of the membrane. Integral proteins that act as channels or pumps work in one direction. Carbohydrates, attached to lipids or proteins, are also found on the exterior surface of the plasma membrane. These carbohydrate complexes help the cell bind substances that the cell needs in the extracellular fluid. This adds considerably to the selective nature of plasma membranes.

Recall that plasma membranes have hydrophilic and hydrophobic regions. This characteristic helps the movement of certain materials through the membrane and hinders the movement of others. Lipid-soluble material can easily slip through the hydrophobic lipid core of the membrane. Substances such as the fat-soluble vitamins A, D, E, and K readily pass through the plasma membranes in the digestive tract and other tissues. Fat-soluble drugs also gain easy entry into cells and are readily transported into the body’s tissues and organs. Molecules of oxygen and carbon dioxide have no charge and pass through by simple diffusion.

Polar substances, with the exception of water, present problems for the membrane. While some polar molecules connect easily with the outside of a cell, they cannot readily pass through the lipid core of the plasma membrane. Additionally, whereas small ions could easily slip through the spaces in the mosaic of the membrane, their charge prevents them from doing so. Ions such as sodium, potassium, calcium, and chloride must have a special means of penetrating plasma membranes. Simple sugars and amino acids also need help with transport across plasma membranes.

Diffusion is a passive process of transport. A single substance tends to move from an area of high concentration to an area of low concentration until the concentration is equal across the space. You are familiar with diffusion of substances through the air. For example, think about someone opening a bottle of perfume in a room filled with people. The perfume is at its highest concentration in the bottle and is at its lowest at the edges of the room. The perfume vapor will diffuse, or spread away, from the bottle, and gradually, more and more people will smell the perfume as it spreads. Materials move within the cell’s cytosol by diffusion, and certain materials move through the plasma membrane by diffusion (Figure 1). Diffusion expends no energy. Rather the different concentrations of materials in different areas are a form of potential energy, and diffusion is the dissipation of that potential energy as materials move down their concentration gradients, from high to low.

Figure 1. Diffusion through a permeable membrane follows the concentration gradient of a substance, moving the substance from an area of high concentration to one of low concentration. (credit: modification of work by Mariana Ruiz Villarreal)

For an animation of the diffusion process in action, view this short video on cell membrane transport. 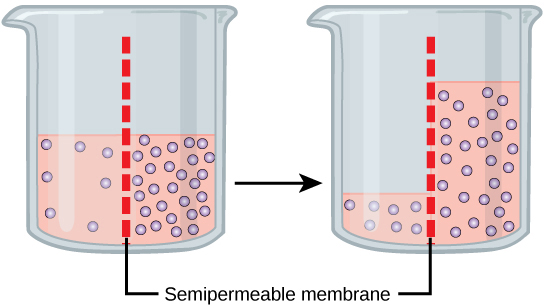 Watch this video that illustrates diffusion in hot versus cold solutions.

In a hypertonic solution (the prefix hyper– refers to the extracellular fluid having a higher concentration of solutes than the cell’s cytoplasm), the fluid contains less water than the cell does, such as seawater. Because the cell has a lower concentration of solutes, the water will leave the cell. In effect, the solute is drawing the water out of the cell. This may cause an animal cell to shrivel, or crenate.

A doctor injects a patient with what the doctor thinks is isotonic saline solution. The patient dies, and autopsy reveals that many red blood cells have been destroyed. Do you think the solution the doctor injected was really isotonic?

Some organisms, such as plants, fungi, bacteria, and some protists, have cell walls that surround the plasma membrane and prevent cell lysis. The plasma membrane can only expand to the limit of the cell wall, so the cell will not lyse. In fact, the cytoplasm in plants is always slightly hypertonic compared to the cellular environment, and water will always enter a cell if water is available. This influx of water produces turgor pressure, which stiffens the cell walls of the plant (Figure 4). In nonwoody plants, turgor pressure supports the plant. If the plant cells become hypertonic, as occurs in drought or if a plant is not watered adequately, water will leave the cell. Plants lose turgor pressure in this condition and wilt.

Figure 4. The turgor pressure within a plant cell depends on the tonicity of the solution that it is bathed in. (credit: modification of work by Mariana Ruiz Villarreal)

The passive forms of transport, diffusion and osmosis, move material of small molecular weight. Substances diffuse from areas of high concentration to areas of low concentration, and this process continues until the substance is evenly distributed in a system. In solutions of more than one substance, each type of molecule diffuses according to its own concentration gradient. Many factors can affect the rate of diffusion, including concentration gradient, the sizes of the particles that are diffusing, and the temperature of the system.

In living systems, diffusion of substances into and out of cells is mediated by the plasma membrane. Some materials diffuse readily through the membrane, but others are hindered, and their passage is only made possible by protein channels and carriers. The chemistry of living things occurs in aqueous solutions, and balancing the concentrations of those solutions is an ongoing problem. In living systems, diffusion of some substances would be slow or difficult without membrane proteins.

1. A doctor injects a patient with what he thinks is isotonic saline solution. The patient dies, and autopsy reveals that many red blood cells have been destroyed. Do you think the solution the doctor injected was really isotonic?

2. Why does osmosis occur?

1. No, it must have been hypotonic, as a hypotonic solution would cause water to enter the cells, thereby making them burst.