The cellular process of transcription generates messenger RNA (mRNA), a mobile molecular copy of one or more genes with an alphabet of A, C, G, and uracil (U). Translation of the mRNA template converts nucleotide-based genetic information into a protein product. Protein sequences consist of 20 commonly occurring amino acids; therefore, it can be said that the protein alphabet consists of 20 letters (Figure 1). Each amino acid is defined by a three-nucleotide sequence called the triplet codon. Different amino acids have different chemistries (such as acidic versus basic, or polar and nonpolar) and different structural constraints. Variation in amino acid sequence gives rise to enormous variation in protein structure and function. 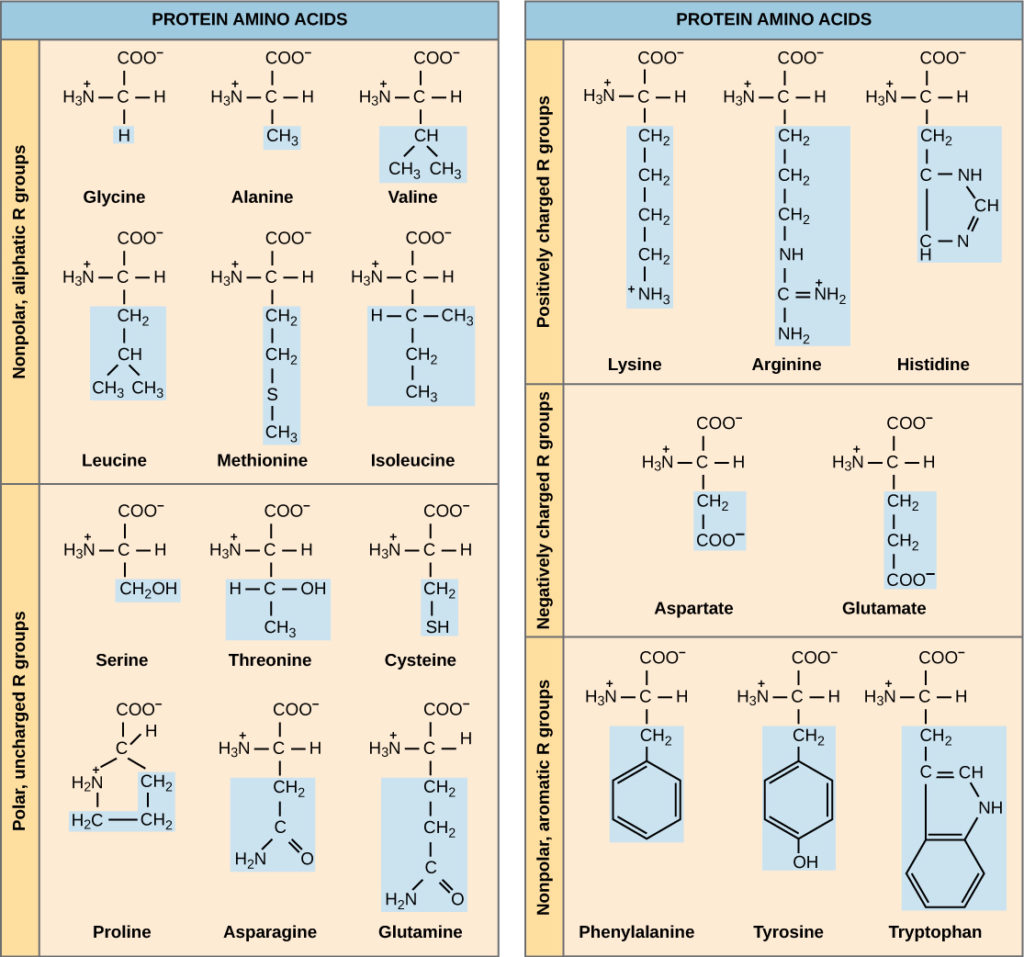 Figure 1. Structures of the 20 amino acids found in proteins are shown. Each amino acid is composed of an amino group (NH+3), a carboxyl group (COO−), and a side chain (blue). The side chain may be nonpolar, polar, or charged, as well as large or small. It is the variety of amino acid side chains that gives rise to the incredible variation of protein structure and function. 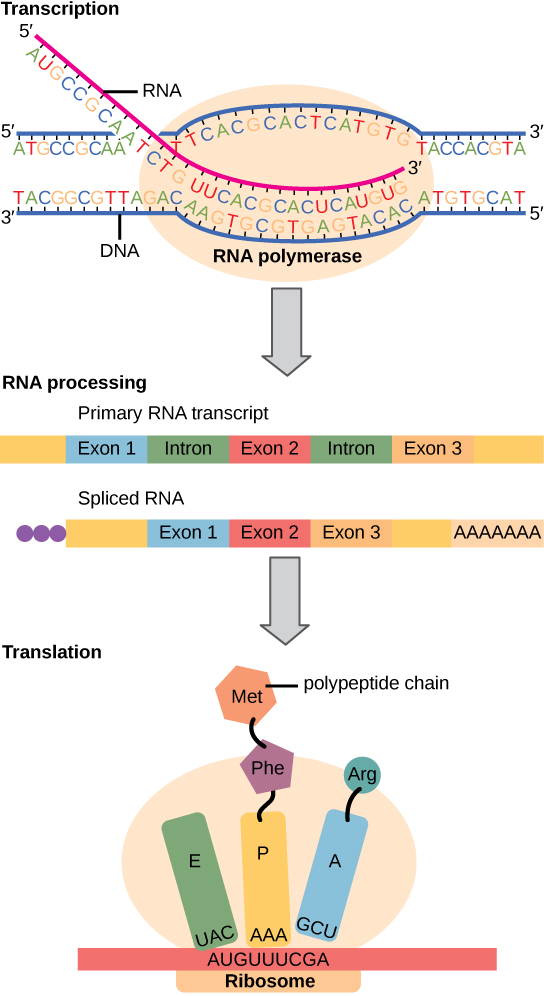 The flow of genetic information in cells from DNA to mRNA to protein is described by the Central Dogma (Figure 2), which states that genes specify the sequence of mRNAs, which in turn specify the sequence of proteins. The decoding of one molecule to another is performed by specific proteins and RNAs. Because the information stored in DNA is so central to cellular function, it makes intuitive sense that the cell would make mRNA copies of this information for protein synthesis, while keeping the DNA itself intact and protected. The copying of DNA to RNA is relatively straightforward, with one nucleotide being added to the mRNA strand for every nucleotide read in the DNA strand. The translation to protein is a bit more complex because three mRNA nucleotides correspond to one amino acid in the polypeptide sequence. However, the translation to protein is still systematic and colinear, such that nucleotides 1 to 3 correspond to amino acid 1, nucleotides 4 to 6 correspond to amino acid 2, and so on.

Scientists painstakingly solved the genetic code by translating synthetic mRNAs in vitro and sequencing the proteins they specified (Figure 3). 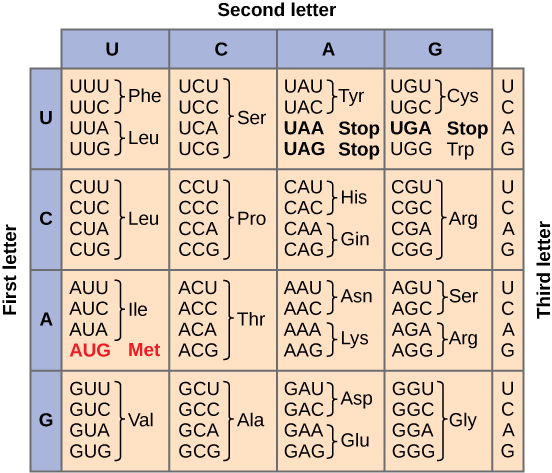 Figure 4. The deletion of two nucleotides shifts the reading frame of an mRNA and changes the entire protein message, creating a nonfunctional protein or terminating protein synthesis altogether.

Background: Genes are carried on chromosomes and are made of DNA. All mammals are diploid, meaning they have two copies of each chromosome. However, not all plants are diploid. The common strawberry is octoploid (8n) and the cultivated kiwi is hexaploid (6n). Research the total number of chromosomes in the cells of each of these fruits and think about how this might correspond to the amount of DNA in these fruits’ cell nuclei. Read about the technique of DNA isolation to understand how each step in the isolation protocol helps liberate and precipitate DNA.

Hypothesis: Hypothesize whether you would be able to detect a difference in DNA quantity from similarly sized strawberries and kiwis. Which fruit do you think would yield more DNA?

Test your hypothesis: Isolate the DNA from a strawberry and a kiwi that are similarly sized. Perform the experiment in at least triplicate for each fruit.

Record your observations: Because you are not quantitatively measuring DNA volume, you can record for each trial whether the two fruits produced the same or different amounts of DNA as observed by eye. If one or the other fruit produced noticeably more DNA, record this as well. Determine whether your observations are consistent with several pieces of each fruit.

Analyze your data: Did you notice an obvious difference in the amount of DNA produced by each fruit? Were your results reproducible?

Draw a conclusion: Given what you know about the number of chromosomes in each fruit, can you conclude that chromosome number necessarily correlates to DNA amount? Can you identify any drawbacks to this procedure? If you had access to a laboratory, how could you standardize your comparison and make it more quantitative?

The genetic code refers to the DNA alphabet (A, T, C, G), the RNA alphabet (A, U, C, G), and the polypeptide alphabet (20 amino acids). The Central Dogma describes the flow of genetic information in the cell from genes to mRNA to proteins. Genes are used to make mRNA by the process of transcription; mRNA is used to synthesize proteins by the process of translation. The genetic code is degenerate because 64 triplet codons in mRNA specify only 20 amino acids and three nonsense codons. Almost every species on the planet uses the same genetic code.

1. Imagine if there were 200 commonly occurring amino acids instead of 20. Given what you know about the genetic code, what would be the shortest possible codon length? Explain.

2. Discuss how degeneracy of the genetic code makes cells more robust to mutations.

1.  For 200 commonly occurring amino acids, codons consisting of four types of nucleotides would have to be at least four nucleotides long, because 44 = 256. There would be much less degeneracy in this case.

2. Codons that specify the same amino acid typically only differ by one nucleotide. In addition, amino acids with chemically similar side chains are encoded by similar codons. This nuance of the genetic code ensures that a single-nucleotide substitution mutation might either specify the same amino acid and have no effect, or may specify a similar amino acid, preventing the protein from being rendered completely nonfunctional.