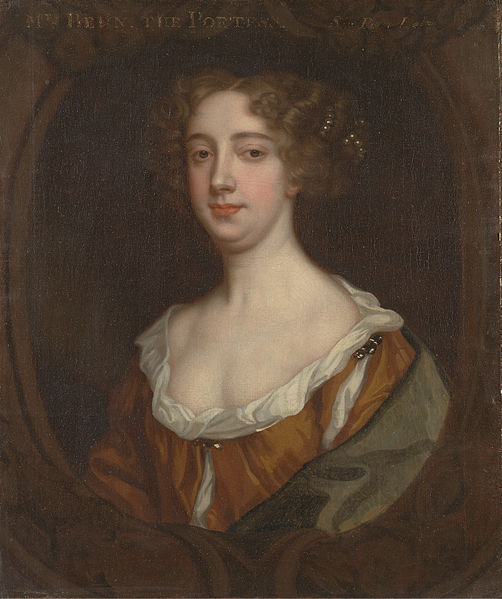 Aphra Behn [Aphara] (14 December 1640? – 16 April 1689) was a British playwright, poet, translator and fiction writer from the Restoration era. As one of the first English women to earn her living by her writing, she broke cultural barriers and served as a literary role model for later generations of women authors. Rising from obscurity, she came to the notice of Charles II, who employed her as a spy in Antwerp. Upon her return to London and a probable, brief stay in debtors’ prison, she began writing for the stage. She belonged to a coterie of poets and famous libertines such as John Wilmot, Lord Rochester. She wrote under the pastoral pseudonym Astrea. During the turbulent political times of the Exclusion Crisis, she wrote an epilogue and prologue that brought her into legal trouble; she thereafter devoted most of her writing to prose genres and translations. A staunch supporter of the Stuart line, she declined an invitation from Bishop Burnet to write a welcoming poem to the new king William III. She died shortly after.

Behn is now regarded as a key dramatist of the seventeenth-century theatre, and her prose work is critically acknowledged as having been important to the development of the English novel. She is perhaps best known to modern audiences for her short novel Oroonoko (1688), the tale of an enslaved African prince. It is notable for its exploration of slavery, race, and gender.

Behn was immensely prolific, adapting plays, writing fiction and poetry, and translating works from French and Latin. She caused scandal in some of her chosen subject matter, often alluding to sexual desire. She was aware, and stated that, the works would not have caused problems if they had been written by a man. Behn’s work frequently takes homoerotic themes, featuring same-sex love between men. One of her best known poems, “The Disappointment,” is the story of a sexual encounter told from a woman’s point of view that may be interpreted as a work about male impotence.

Additional information on Behn’s life, work, and influence can be found here.