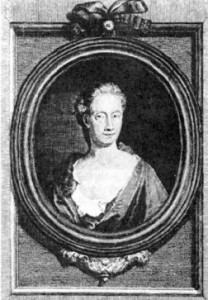 Eliza Haywood (c. 1693 – 25 February 1756), born Elizabeth Fowler, was an English writer, actress and publisher. An increase in interest and recognition of Haywood’s literary works began in the 1980’s. Described as “prolific even by the standards of a prolific age” (Blouch, intro 7), Haywood wrote and published over seventy works during her lifetime including fiction, drama, translations, poetry, conduct literature and periodicals. Haywood is a significant figure of the 18th century as one of the important founders of the novel in English. Today she is studied primarily as a novelist.

Haywood gave conflicting accounts of her own life; her origins remain unclear and there are presently contending versions of her biography. For example, it was once mistakenly believed that she married the Rev. Valentine Haywood.

Some details have been widely accepted however: She was probably born in either Shropshire or London, England. Her first entry into the public record is in Dublin, Ireland, in 1715 when she was listed as “Mrs. Haywood” in Thomas Shadwell’s Shakespeare adaptation, Timon of Athens; or, The Man-Hater at the Smock Alley Theatre. She had an open live-in relationship with William Hatchett, the father of her second child. She also had a child with Richard Savage.

William Hatchett was a bookseller who shared a stage career with Haywood, and the couple were lovers and companions for more than twenty years. They collaborated on an adaptation of The Tragedy of Tragedies by Henry Fielding and an opera, The Opera of Operas; or, Tom Thumb the Great (1733).

Haywood’s writing career began in 1719 with the first instalment of Love in Excess, a novel, and ended in the year she died with conduct books The Wife and The Husband, and the biweekly periodical The Young Lady. She wrote in several genres and many of her works were published anonymously. There is much of Haywood’s writing career that still remains unknown.

She fell ill in October 1755 and died on 25 February 1756. She was buried in Westminster. For unknown reasons, her burial was delayed by about a week and her death duties remain unpaid.

Haywood, Delarivier Manley and Aphra Behn were known as “The fair triumvirate of wit” and are considered the most prominent writers of amatory fiction. Eliza Haywood’s prolific fiction develops from titillating romance novels and amatory fiction during the early 1720s to works focused more on “women’s rights and position” (Schofield, Haywood 63) in the later 1720s into the 1730s. In the middle novels of her career, women were locked up, tormented and beleaguered by domineering men. In the later novels of the 1740s and 1750s however, marriage was viewed as a positive situation between men and women.

Due to the economy of publishing in the 18th century, her novels often ran to multiple volumes. Authors were paid only once for a book and received no royalties; a second volume meant a second payment.

Fantomina; or Love in a Maze (1724) is a short story about a woman who assumes the roles of a prostitute, a maid, a widow, and a Lady to repeatedly seduce a man named Beauplaisir. Schofield points out that, “Not only does she satisfy her own sexual inclinations, she smugly believes that ‘while he thinks to fool me, [he] is himself the only beguiled Person’” (50). This novel asserts that women have some access to power in the social sphere, one of the recurring themes in Haywood’s work. It has been argued that it is indebted to the interpolated tale of the “Invisible Mistress” in Paul Scarron’s Roman Comique.

Additional information on Haywood’s life, work, and influence can be found here.