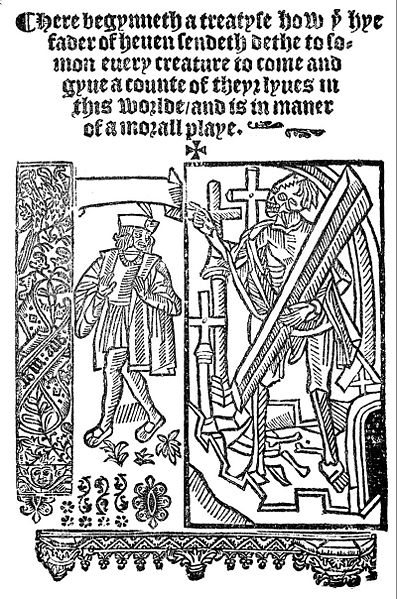 Frontispiece from edition of Everyman published by John Sklot c. 1530.

The Somonyng of Everyman (The Summoning of Everyman), usually referred to simply as Everyman, is a late 15th-century morality play. Like John Bunyan’s 1678 Christian novel The Pilgrim’s Progress, Everyman uses allegorical characters to examine the question of Christian salvation and what Man must do to attain it. The premise is that the good and evil deeds of one’s life will be tallied by God after death, as in a ledger book. The play is the allegorical accounting of the life of Everyman, who represents all mankind. In the course of the action, Everyman tries to convince other characters to accompany him in the hope of improving his account. All the characters are also allegorical, each personifying an abstract idea such as Fellowship, (material) Goods, and Knowledge. The conflict between good and evil is dramatised by the interactions between characters. Everyman is being singled out because it is difficult for him to find characters to accompany him on his pilgrimage. Everyman eventually realizes through this pilgrimage that he is essentially alone, despite all the personified characters that were supposed necessities and friends to him. Everyman learns that when you are brought to death and placed before God all you are left with is your own good deeds.

Additional information on Everyman can be found here.