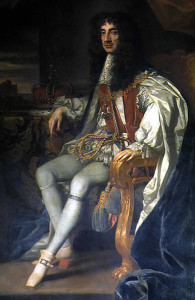 Portrait of Charles II of England in the robes of the Order of the Garter, circa 1675

The Restoration of the English monarchy began in 1660 when the English, Scottish and Irish monarchies were all restored under Charles II after the Interregnum that followed the Wars of the Three Kingdoms. The term Restoration is used to describe both the actual event by which the monarchy was restored, and the period of several years afterwards in which a new political settlement was established. It is very often used to cover the whole reign of Charles II (1660–1685) and often the brief reign of his younger brother James II (1685-1688). In certain contexts it may be used to cover the whole period of the later Stuart monarchs as far as the death of Queen Anne and the accession of the Hanoverian George I in 1714; for example Restoration comedy typically encompasses works written as late as 1710.

The Church of England was restored as the national Church in England, backed by the Clarendon Code and the Act of Uniformity 1662. People reportedly “pranced around May poles as a way of taunting the Presbyterians and Independents” and “burned copies of the Solemn League and Covenant.”

Historian Roger Baker argues that the Restoration and Charles’ coronation mark a reversal of the stringent Puritan morality, “as though the pendulum [of England’s morality] swung from repression to licence more or less overnight.” Theatres reopened after having been closed during the protectorship of Oliver Cromwell, Puritanism lost its momentum, and the bawdy “Restoration comedy” became a recognizable genre. In addition, women were allowed to perform on stage for the first time. In Scotland, Episcopacy was reinstated.

Restoration literature is the English literature written during the historical period commonly referred to as the English Restoration(1660–1689), which corresponds to the last years of the direct Stuart reign in England, Scotland, Wales, and Ireland. In general, the term is used to denote roughly homogeneous styles of literature that center on a celebration of or reaction to the restored court of Charles II. It is a literature that includes extremes, for it encompasses both Paradise Lost and the Earl of Rochester’s Sodom, the high-spirited sexual comedy of The Country Wife and the moral wisdom of The Pilgrim’s Progress. It saw Locke’s Treatises of Government, the founding of the Royal Society, the experiments and holy meditations of Robert Boyle, the hysterical attacks on theaters from Jeremy Collier, and the pioneering of literary criticism from John Dryden and John Dennis. The period witnessed news become a commodity, the essay developed into a periodical art form, and the beginnings of textual criticism.

The dates for Restoration literature are a matter of convention, and they differ markedly from genre to genre. Thus, the “Restoration” in drama may last until 1700, while in poetry it may last only until 1666 (see 1666 in poetry) and the annus mirabilis; and in prose it might end in 1688, with the increasing tensions over succession and the corresponding rise in journalism and periodicals, or not until 1700, when those periodicals grew more stabilized. In general, scholars use the term “Restoration” to denote the literature that began and flourished under Charles II, whether that literature was the laudatory ode that gained a new life with restored aristocracy, the eschatological literature that showed an increasing despair among Puritans, or the literature of rapid communication and trade that followed in the wake of England’s mercantile empire.

The Restoration was an age of poetry. Not only was poetry the most popular form of literature, but it was also the most significant form of literature, as poems affected political events and immediately reflected the times. It was, to its own people, an age dominated only by the king, and not by any single genius. Throughout the period, the lyric, ariel, historical, and epic poem were being developed.

The return of the stage-struck Charles II to power in 1660 was a major event in English theatre history. As soon as the previous Puritan regime’s ban on public stage representations was lifted, the drama recreated itself quickly and abundantly. Two theatre companies, the King’s and the Duke’s Company, were established in London, with two luxurious playhouses built to designs by Christopher Wren and fitted with moveable scenery and thunder and lightning machines.

Traditionally, Restoration plays have been studied by genre rather than chronology, more or less as if they were all contemporary, but scholars today insist on the rapid evolvement of drama in the period and on the importance of social and political factors affecting it. (Unless otherwise indicated, the account below is based on Hume’s influential Development of English Drama in the Late Seventeenth Century, 1976.) The influence of theatre company competition and playhouse economics is also acknowledged, as is the significance of the appearance of the first professional actresses.