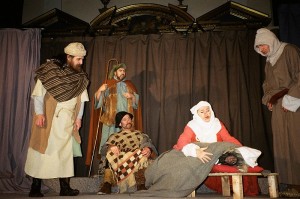 A moment from The Second Shepherds’ Play in the Wakefield Mystery Plays as performed by The Players of St Peter in London in 2005. The shepherds are realising that the baby in the cradle is in fact one of their sheep.

The Second Shepherds’ Play (also known as The Second Shepherds’ Pageant) is a famous medieval mystery play which is contained in the manuscript HM1, the unique manuscript of the Wakefield Cycle. These plays are also referred to as the Towneley Plays, on account of the manuscript residing at Towneley Hall. The plays within the manuscript roughly follow the chronology of the Bible and so were believed to be a cycle, which is now considered not to be the case. This play gained its name because in the manuscript it immediately follows another nativity play involving the shepherds. In fact, it has been hypothesized that the second play is a revision of the first. It appears that the two shepherd plays were not intended to be performed together since many of the themes and ideas of the first play carry over to the second one. In both plays it becomes clear that Christ is coming to Earth to redeem the world from its sins. Although the underlying tone of The Second Shepherd’s Play is serious, many of the antics that occur among the shepherds are extremely farcical in nature.

The name “Wakefield Master” is a title given by Charles Mills Gayley to an unknown author of at least five of the plays that are found in the Wakefield Mystery Plays. Although nothing is known about the author, or the origins of the plays, it is agreed by several scholars that they date sometime between 1400-1450. Because of his influence in most of the Wakefield plays, it is possible he was brought into Wakefield with the purpose of editing and reworking the several plays that were already written, and did such a successful job that he was kept on to write several other plays afterwards.

The plays of the “Wakefield Master” are identified by their unique stanza form, which is nine lines rhyming a a b c c c b with internal rhymes in the first four lines.

Additional information on The Second Shepherd’s Play can be found here.