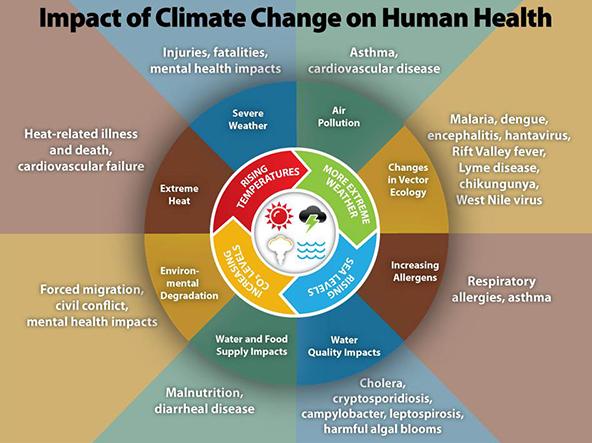 In recent years, the effects of climate change can be felt not just in the United States, but also across the planet. Rising temperatures, more incidences of extreme weather, rising sea levels due to the melting of the ice caps, and increasing levels of carbon dioxide have all had an impact on human health, as the above graphic demonstrates. For example, the quality of water has been noticeably influenced by many different components of climate change. A recent example is the ongoing red tide disaster that is affecting Florida. 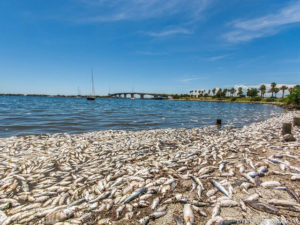 According to the National Oceanic and Atmospheric Administration (NOAA), red tide is a commonly used term for a particular strain of harmful algae bloom. Harmful algae blooms are “when colonies of algae…grow out of control while producing toxic or harmful effects on people, fish, shellfish, marine mammals, and birds” (NOAA 2018). Red tide blooms have been documented since the 1800s, but new organisms that cause harmful algae blooms have been recorded over time and in the 21st century the red tides have spread from being located solely in the eastern Gulf of Mexico to the eastern coast of Mexico.

The three main environmental factors that affect a bloom are the salinity of water, temperature, and wind. The severity of red tides has increased in recent years due to increasing temperatures, alteration of ocean currents, stimulation of photosynthesis due to rising carbon monoxide levels, and intensification or weakening local nutrient upwelling. If climate change continues to be an issue, the likely effects will be an increase in warm-water species at the detriment of cold-water species, changes in the seasonal window of growth of various algae species, and wide-ranging impacts on local ecology, especially marine food webs.