As of 2017, the United States is ranked number one for having the highest obesity rate (OECD, 2017). It is also one of the leading causes for death in the United States (CDC, 2018). Being obese and overweight can increase the chances of health problems such as cardiovascular diseases, diabetes, many types of cancer, and many other diseases. Obesity can be complex due to many reasons and factors such as genetics, individual and social factors that include eating and exercise patterns (Schenider, 2017).

Obesity is usually defined based on terms of body-mass index (BMI). It is used to measure one’s weight by calculating a person’s weight in kilogram and dividing it by the square of their height in meters (CDC, 2016). According to Centers for Disease Control and Prevention, if you have BMI of 18.5 – 24.9, it is considered normal, 25 – 29.9, it is considered overweight, if your BMI is over 30, you are considered obese. Over the past years, the amount of overweight and obese adults has grown dramatically over the years. In 2015-2016, 39.8% of adults that were 20 years and older were obese and 71.6% of adults that were 20 years and older were overweight (CDC, 2017).

There are various factors that can lead to being overweight and obese. One of the reasons can be race. According to National Health and Nutrition Examination Survey (NHANES), 47% of the Latino adult race, 46.8% of the Black adult race, and 37.9% of the white adults are considered to be obese in the United States. Asian Americans has the least rates of obesity out of all racial groups, which is 12.7%.

Another factor that leads to obesity and being overweight can be age. As one ages, the chance of being overweight increases. However, it declines in the age group of 75 years old and older (Schenider, 2017). The prevalence of obesity was 18.5% for children adolescents in 2015-2016 (CDC, 2018). The CDC identifies that children that are at the 85th percentile and more are considered to be overweight. Children who are overweight are more likely to become obese when they are adults as well and will have a higher risk of chronic disease.

Problems with Diet and Nutrition

Obesity can depend on unhealthy eating and lack of physical activity. Americans tend to eat more meat than vegetables and fruits. This increases the chance of cardiovascular diseases, cancer risk, and diabetes. Only one-third of the population eats at least some food from all food groups. Americans tend to eat more fast food such as hamburgers, French fries, donuts, fried chicken, etc. They tend to eat these more due to the convenience and they are faster to get from restaurants rather than cooking a healthy meal at home. Additionally, children have an increase of taking in sweetened beverages (Schneider, 2017). Americans as a whole tend to drink more soft drinks and fruit drinks. Milk consumption has declined over 37%, according to the USDA (Ferdman, 2014). This is a problem because milk consumption can help control one’s weight and provide calcium for their bones (Schenider, 2017).

Losing weight can help promote decreased chance of obesity, and can be inexpensive. Exercising can benefit individuals in many ways such as reducing chronic diseases, help reduce stress, improve brain function, and increase your chances of living longer (Medline Plus, 2018). Studies have shown that exercising can reduce heart diseases and strokes (Madell, 2017). Exercising can also prevent diabetes.

A standard guideline for exercising for children and adolescents is to have 60 minutes or more daily of physical activity. For adults, 150 minutes per week at least of moderate-intensity activity such as walking or 75 minutes per week of vigorous-intensity activity such as jumping rope. Older adult and people with disabilities or chronic medical conditions should do as much as they are able to (Schenider, 2017).

In order to promote healthier eating for the individual level, watch out for what you are eating by reading the nutritional information and eating the suggested amount per day from each food group. Intrapersonal level can be achieved by social support from family and friends. Social support can consist of a family going on a diet and exercising together to motivate each other.

Organizational level can be completed by having schools educating students with nutrition and health classes. Another way is to require students to take physical education classes in order to graduate. Additionally, schools can require students to do a standardized fitness test. Having students do a fitness test yearly can notify students and their families to know if they are reaching the average good health scale. An example of how an organization had helped was the World Health Organization (WHO). WHO created health messages like “Eat 5 A Day”, to promote eating a minimum of 400g of fruits each day. Basically, people are informed to eat portions of 80g of a fruit or vegetable. If individuals ate 5 times the fruit and vegetables each day, it should fulfill the standard 400g or more that each person is advised to eat (NHS, 2015). In the end, it has brought to organization’s attention that it was quite successful. Some other ways to promote being healthy is having health care providers counsel their patients about physical activity because studies have shown that patients are strongly influenced by their physicians (Oberg & Frank, 2011).

The community scale is met by using social media, television, billboards, movie theaters and mailing information (CDC, N.D.). Building community centers and having more beautiful sceneries with walking and biking trails nearby so that individuals can exercise with their social groups. Building a recreation center nearby a school promotes people to go exercise after school, or at least should be located where people would not have to travel so far. Having the community build stairs next to escalators or elevators so people would utilize the stairs more.

State policies would be including calorie counts for each food item, especially in fast food restaurants. Other state policies would be raising taxes and prices on soft drinks and junk food (Schenider, 2017). Many public health advocates believe that the best way of preventing obesity in adulthood is to influence children’s habits (Schenider, 2017). One of the ways to do this is by breastfeeding, it has been proven that breastfeeding has a long-term protective effect against obesity in children (WHO, 2014). Breastfeeding has many health advantages for both a mother and an infant because it helps the mother lose the weight she gained during pregnancy. Whichever way one chooses to help reduce obesity rates, being educated is one of the most effective ways overall.

Human immunodeficiency virus (HIV) remains a relevant concern in the United States today.  The Centers for Disease Control and Prevention (CDC) calculates that roughly 1.2 million people are living with HIV in the USA today (CDC, 2016). Through the utilization of resources such as condoms and prophylactic medications like Truvada, HIV is effectively preventable.

The virus weakens the immune system by attacking the cells responsible for fighting off disease. Currently, there is no cure for HIV. However, if an individual is able to receive consistent supportive therapy after an infection has occurred, they can go on to live a relatively normal life.

Prophylactic: Guarding from or preventing the spread or occurrence of disease or infection.

HIV is transmitted when a healthy person comes into contact with bodily fluids that are contaminated with the virus. Some groups among the population are at an increased risk of contracting HIV than others. Data gathered by the CDC in 2016 stated that 67% of newly reported HIV cases were among men who have sex with men.  HIV is easily transmitted via anal sex because the lining of the rectum is thin and serves as an easy entryway into the body (CDC, 2016). Injection drug users are also at an elevated risk of contracting HIV due to their engagement in high-risk behaviors such as sharing needles.

Being Diagnosed with HIV Is Not a Death Sentence

Once a person is diagnosed with HIV, it is important they undergo treatment. If HIV positive patients receive treatment soon enough, they can go on to live long and productive lives. Their consistent compliance with medical intervention will prevent their HIV status from developing into acquired immune deficiency syndrome (AIDS).  When a patient develops AIDS, their immune system is critically damaged beyond repair. HIV positive individuals often have trouble coping with their status due to the stigma associated with this disease. Many patients require counseling in order to deal with their status.

Approximately 15% of HIV-infected people live unaware of their HIV status (CDC, 2018). This unawareness allows HIV to be easily transmitted via bodily fluids such as semen, pre-seminal fluid, blood, and breast milk.  Additionally, those who remain uninformed about their status are at highest risk for their HIV to manifest into AIDS. Moreover, medications used to prevent the spread of HIV are cheaper than the medications necessary to treat an existing case of HIV.  Patients living with HIV burden the healthcare expenditure more than people who do not require HIV medication.

There exist a multitude of behavioral challenges that contribute to the transmission of HIV and STIs alike. Below, you will find in detail some of the most common challenges individuals face. 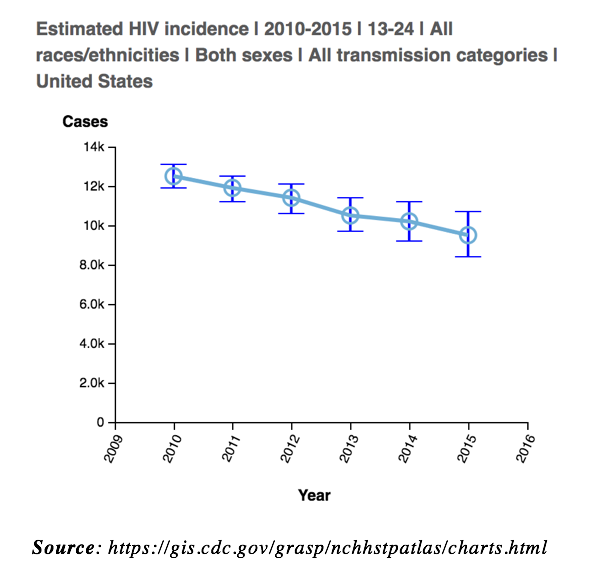 In 2012, the Food and Drug Administration (FDA) approved Truvada: commonly promoted as PrEP (Pre-exposure prophylaxis), as a method of preventing the transmission of HIV. Given Truvada’s approval, it is not surprising that the incidence of HIV has declined. Truvada decreases the likelihood of contracting HIV by greater than 90% if in the event a non-infected individual comes into contact with contaminated bodily fluids (CDC, 2018). This drug is most effective when taken daily. In order to maintain adequate protection, people must remain responsible by taking the medication as prescribed. Missing even one dose will substantially decrease the individual’s protection.

Incidence: A measure of the probability of occurrence of a given medical condition in a population within a specified period of time.

By engaging in risky sexual behavior, individuals increase the chances of contracting HIV.  This can involve engaging in unprotected sex, having multiple partners, and having sex while under the influence. A study conducted by the CDC on high school students revealed some alarming results.  The data illustrated that of the students surveyed, 41% of them were sexually active. Of these, 30% had sex in the preceding 3 months and greater than 40% of them failed to use a condom. Furthermore, 21% confessed to being under the influence while having sex (CDC, 2017). As individuals become introduced to alcohol or other substances, they increase the likelihood of contracting an STI substantially (Health & Behavior, 2001).

Not Getting Screened for STI’s

Failure to use primary prevention fosters the transmission of HIV. Primary prevention strives to decrease the incidence of disease. An example of primary prevention is disease screenings. The CDC suggests undergoing STI screenings one to two times per year and once every three to six months if the individual is part of a group at risk.  HIV testing is critical because it allows patients to detect their status. By making the patient aware of their status they can seek treatment and prevent further transmission. When individuals fail to get tested, they remain unaware of their status and proceed to engage in high-risk behaviors. Subsequently, this contributes to the spread of the disease. The same research that the CDC conducted on high school students affirmed that an insignificant 10% of students stated ever getting tested for HIV (CDC, 2017).

Primary Prevention: Intervening before health effects occur, through measures such as vaccinations, altering risky behaviors (poor eating habits, tobacco use), and banning substances known to be associated with a disease or health condition.