Rich data exists on most health conditions—from chronic to acute illnesses to injuries and disabilities. These data come from a variety of sources including the census, electronic medical records, national surveys, surveillance systems, and vital statistics.

Some data are collected by state agencies and some by federal agencies. It can be very difficult to compare data collected by different groups because the data may not be collected or analyzed the same way. There may be privacy issues that prevent agencies from sharing data, especially health data.

The main types of hazard data that systems contain include:

When samples, observations, inspection reports or source/compliance tests are conducted at a specific location.

Any facility that emits pollutants into the environment is required by law to keep detailed records of these emissions and to report them to the U.S. Environmental Protection Agency (EPA). Extensive hazard data are generated from internal records of these facilities and from their publicly available reports.

Is periodic or continuous surveillance or testing. Data are gathered from fixed points within the environment (e.g., air monitoring stations, routine groundwater sampling, or monitoring of wells) to determine pollutant levels.

Modeling is a mathematical method:

Using known information to make simulations, estimates, or predictions about a system or condition. For example, modeled air data are used to estimate levels of ozone and particulate matter in the air. These data are applied to areas that do not have air quality monitors and to fill in time gaps when monitors may not be recording data.

So, where does this modeled air data come from? The EPA maintains a database called the Air Quality System. This system contains data from about 4,000 monitoring stations around the country. However, these monitoring stations don’t operate all the time and are in only about 20 percent of the counties in the United States.

Modeled air data statistically combine monitoring data from the Air Quality System with results from another EPA dataset called the Community Multiscale Air Quality model. Though it would be more desirable to have environmental monitoring data for more counties or have personal monitoring for measurement of the immediate and continually changing environment of individuals or populations, this is typically cost-prohibitive.

Hazard data, which various agencies collect, encompass data from environmental monitoring of sources such as air, water, soil, food, and vectors, as well as data derived from estimates, models, source measurements, calculations, and facility and other reports. A typical example of hazard surveillance is air pollution monitoring in a certain area. Many hazard data systems have been established and are already in use across the United States. This systems store information on a variety of possible hazards, from chemical spills to air pollution. 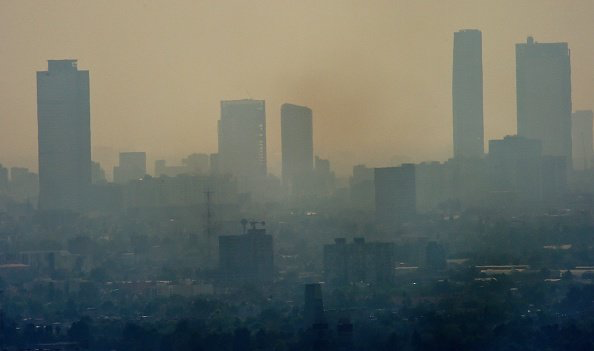 View of Mexico City amid smog on Dec. 26, 2015. Mexico City is considered one of the most polluted cities in the world. Ronaldo Schemidt-AFP/Getty Images