1. A Category System to Define Stages

Given the theoretical nature of health theories, there is no textbook definition for how stages should be written or implemented (Weinstein). Simple human diversity makes it impossible to classify everyone into a stage of a health theory, but there are still a few general stages of change that recur throughout health theories.

“Health behaviors do not exist in a vacuum” (Dr. Jessica Kruger). They are influenced and changed by an enormous quantity of social, environmental, and economic variables. An organized system of stages gives health educators greater leverage in creating change and overcoming these variables (Weinstein).

With a system of stages created, the next core concept of stage theory is an order for an individual to pass through the stages. Once this order has been developed, it is possible to insert the health behavior. Here we see several examples of health behaviors inserted into the Precaution Adoption Process Model: 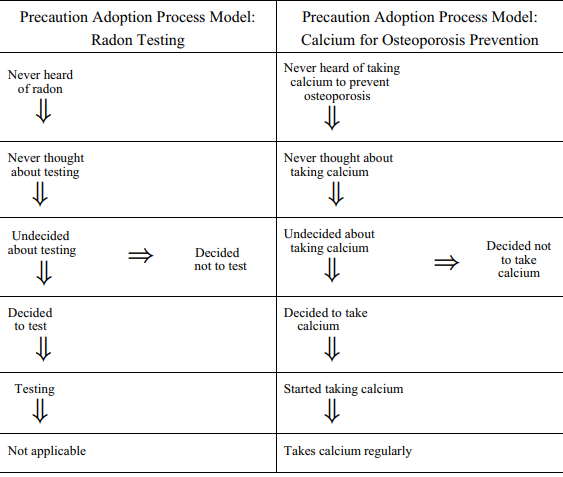 Passing through the stages in the correct order is neither necessary or guaranteed (Weinstein), as both the PAPM model and Transtheoretical Model both take into account relapse in behavior or the decision to not act. Some criticisms against stage theory are that human variables are too varied to create an order to stages at all, or that the time spent in each stage is ambiguous (Munro).

3. Common Barriers to Change Facing People In The Same Stage

Following the creation of order in a health theory, there will still be a lack of detail pertaining to the health behavior, and an accounting must be made of the universal barriers. Helping people overcome health barriers is oftentimes the goal of public health professionals, and many barriers are consistent in different stages of different theories (Weinstein). Some of these common barriers include accessibility, knowledge, attitudes, culture, available resources, finances, and policies (Grol). Any of these barriers can cause an individual to remain in a stage for a lengthy period of time. 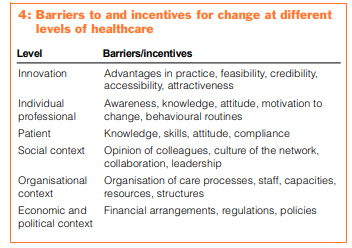 While the barriers to change are widely varied, it is also crucial to note that they are not the same across all stages. While lack of motivation may hinder a person from exiting the contemplation stage, it may be a lack of finances that keeps them stuck in the planning stage. The necessity of creating a variety of health interventions stems from this diversity of barriers (Weinstein).