Radioactive isotopes have the same chemical properties as stable isotopes of the same element, but they emit radiation, which can be detected. If we replace one (or more) atom(s) with radioisotope(s) in a compound, we can track them by monitoring their radioactive emissions. This type of compound is called a radioactive tracer (or radioactive label). Radioisotopes are used to follow the paths of biochemical reactions or to determine how a substance is distributed within an organism. Radioactive tracers are also used in many medical applications, including both diagnosis and treatment. They are used to measure engine wear, analyze the geological formation around oil wells, and much more.

Radioisotopes have revolutionized medical practice (see Half-Lives for Several Radioactive Isotopes), where they are used extensively. Over 10 million nuclear medicine procedures and more than 100 million nuclear medicine tests are performed annually in the United States. Four typical examples of radioactive tracers used in medicine are technetium-99 [latex]\left({}_{43}^{99}\text{Tc}\right)[/latex], thallium-201 [latex]\left({}_{81}^{201}\text{Tl}\right)[/latex], iodine-131 [latex]\left({}_{53}^{131}\text{I}\right)[/latex], and sodium-24 [latex]\left({}_{11}^{24}\text{Na}\right)[/latex]. Damaged tissues in the heart, liver, and lungs absorb certain compounds of technetium-99 preferentially. After it is injected, the location of the technetium compound, and hence the damaged tissue, can be determined by detecting the γ rays emitted by the Tc-99 isotope. Thallium-201 becomes concentrated in healthy heart tissue, so the two isotopes, Tc-99 and Tl-201, are used together to study heart tissue. Iodine-131 concentrates in the thyroid gland, the liver, and some parts of the brain. It can therefore be used to monitor goiter and treat thyroid conditions, such as Grave’s disease, as well as liver and brain tumors. Salt solutions containing compounds of sodium-24 are injected into the bloodstream to help locate obstructions to the flow of blood. 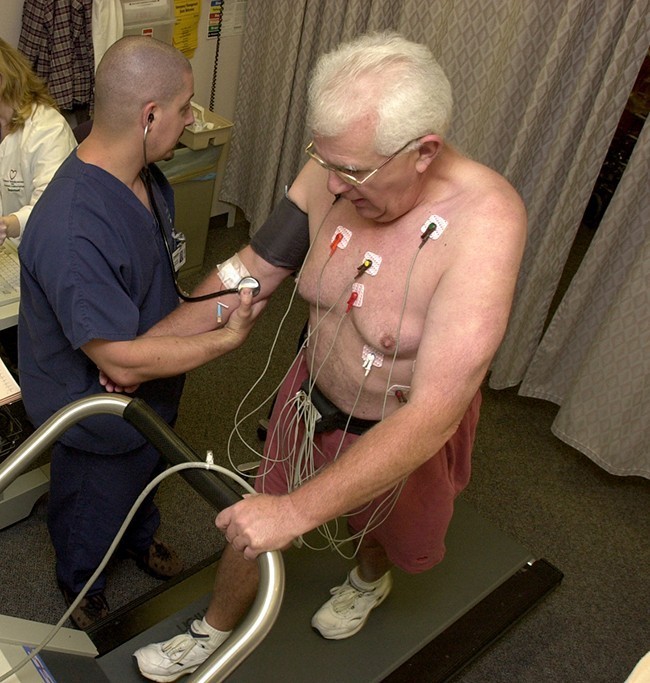 Radioisotopes used in medicine typically have short half-lives—for example, the ubiquitous Tc-99m has a half-life of 6.01 hours. This makes Tc-99m essentially impossible to store and prohibitively expensive to transport, so it is made on-site instead. Hospitals and other medical facilities use Mo-99 (which is primarily extracted from U-235 fission products) to generate Tc-99. Mo-99 undergoes β decay with a half-life of 66 hours, and the Tc-99 is then chemically extracted. The parent nuclide Mo-99 is part of a molybdate ion, [latex]{\text{MoO}}_{4}^{2-}[/latex]; when it decays, it forms the pertechnetate ion, [latex]{\text{TcO}}_{4}^{\text{-}}[/latex]. These two water-soluble ions are separated by column chromatography, with the higher charge molybdate ion adsorbing onto the alumina in the column, and the lower charge pertechnetate ion passing through the column in the solution. A few micrograms of Mo-99 can produce enough Tc-99 to perform as many as 10,000 tests. 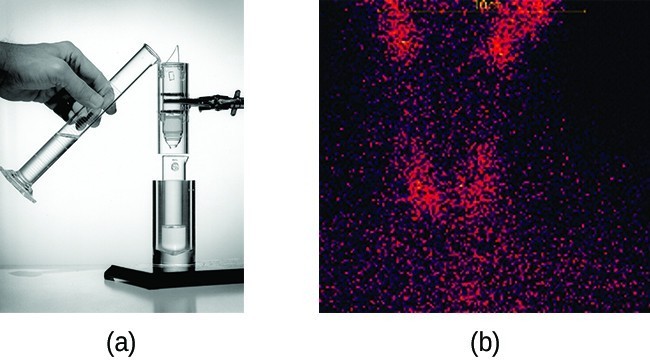 Figure 2. (a) The first Tc-99m generator (circa 1958) is used to separate Tc-99 from Mo-99. The MoO42− is retained by the matrix in the column, whereas the TcO4− passes through and is collected. (b) Tc-99 was used in this scan of the neck of a patient with Grave’s disease. The scan shows the location of high concentrations of Tc-99. (credit a: modification of work by the Department of Energy; credit b: modification of work by “MBq”/Wikimedia Commons) 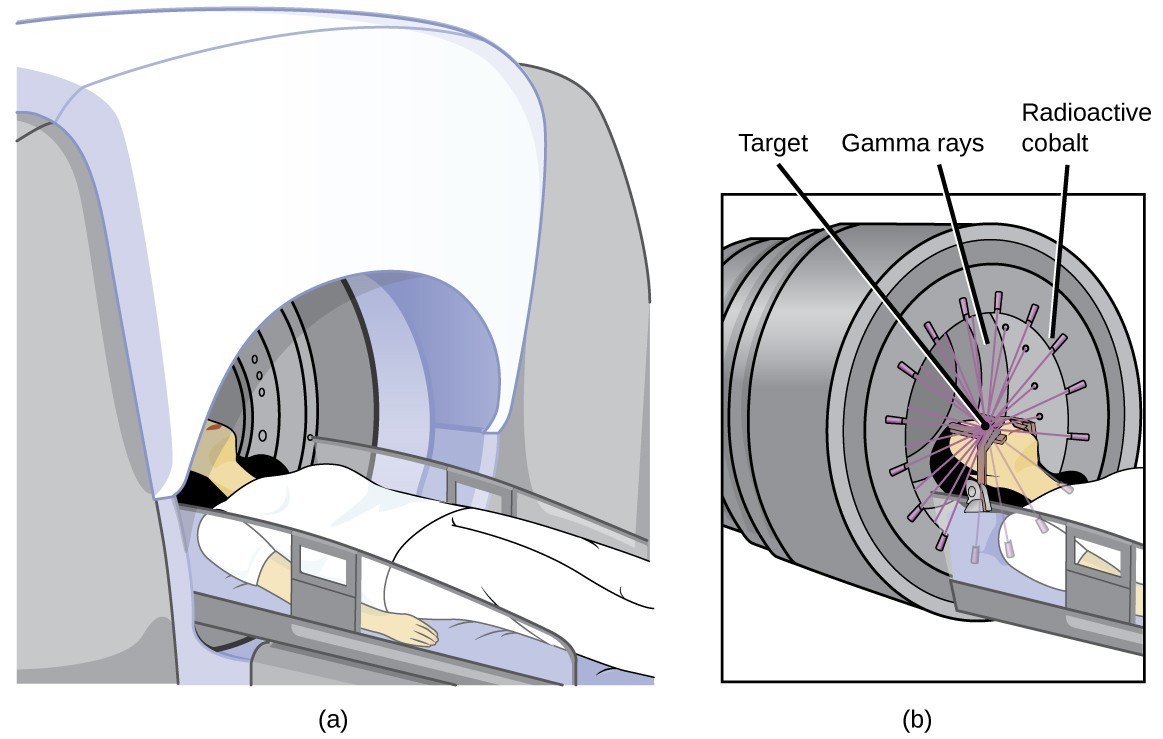 Figure 3. The cartoon in (a) shows a cobalt-60 machine used in the treatment of cancer. The diagram in (b) shows how the gantry of the Co-60 machine swings through an arc, focusing radiation on the targeted region (tumor) and minimizing the amount of radiation that passes through nearby regions.

Cobalt-60 is a synthetic radioisotope produced by the neutron activation of Co-59, which then undergoes β decay to form Ni-60, along with the emission of γ radiation. The overall process is:

The overall decay scheme for this is shown graphically in Figure 4.

Figure 4. Co-60 undergoes a series of radioactive decays. The γ emissions are used for radiation therapy.

Radioisotopes are used in diverse ways to study the mechanisms of chemical reactions in plants and animals. These include labeling fertilizers in studies of nutrient uptake by plants and crop growth, investigations of digestive and milk-producing processes in cows, and studies on the growth and metabolism of animals and plants.

For example, the radioisotope C-14 was used to elucidate the details of how photosynthesis occurs. The overall reaction is:

but the process is much more complex, proceeding through a series of steps in which various organic compounds are produced. In studies of the pathway of this reaction, plants were exposed to CO2 containing a high concentration of [latex]{}_{6}^{14}\text{C}[/latex]. At regular intervals, the plants were analyzed to determine which organic compounds contained carbon-14 and how much of each compound was present. From the time sequence in which the compounds appeared and the amount of each present at given time intervals, scientists learned more about the pathway of the reaction.

Commercial applications of radioactive materials are equally diverse. They include determining the thickness of films and thin metal sheets by exploiting the penetration power of various types of radiation. Flaws in metals used for structural purposes can be detected using high-energy gamma rays from cobalt-60 in a fashion similar to the way X-rays are used to examine the human body. In one form of pest control, flies are controlled by sterilizing male flies with γ radiation so that females breeding with them do not produce offspring. Many foods are preserved by radiation that kills microorganisms that cause the foods to spoil.

Americium-241, an α emitter with a half-life of 458 years, is used in tiny amounts in ionization-type smoke detectors. The α emissions from Am-241 ionize the air between two electrode plates in the ionizing chamber. A battery supplies a potential that causes movement of the ions, thus creating a small electric current. When smoke enters the chamber, the movement of the ions is impeded, reducing the conductivity of the air. This causes a marked drop in the current, triggering an alarm.

Figure 6. Inside a smoke detector, Am-241 emits α particles that ionize the air, creating a small electric current. During a fire, smoke particles impede the flow of ions, reducing the current and triggering an alarm. (credit a: modification of work by “Muffet”/Wikimedia Commons)

Compounds known as radioactive tracers can be used to follow reactions, track the distribution of a substance, diagnose and treat medical conditions, and much more. Other radioactive substances are helpful for controlling pests, visualizing structures, providing fire warnings, and for many other applications. Hundreds of millions of nuclear medicine tests and procedures, using a wide variety of radioisotopes with relatively short half-lives, are performed every year in the US. Most of these radioisotopes have relatively short half-lives; some are short enough that the radioisotope must be made on-site at medical facilities. Radiation therapy uses high-energy radiation to kill cancer cells by damaging their DNA. The radiation used for this treatment may be delivered externally or internally.

1. Introduction of either radioactive Ag+ or radioactive Cl– into the solution containing the stated reaction, with subsequent time given for equilibration, will produce a radioactive precipitate that was originally devoid of radiation.

chemotherapy: similar to internal radiation therapy, but chemical rather than radioactive substances are introduced into the body to kill cancer cells

external beam radiation therapy: radiation delivered by a machine outside the body

radiation therapy: use of high-energy radiation to damage the DNA of cancer cells, which kills them or keeps them from dividing