A person who unlawfully and by force enters or attempts to enter a person’s dwelling, residence, or occupied vehicle is presumed to be doing so with the intent to commit an unlawful act involving force or violence…

Definition of Denial or Failure of Proof and Affirmative Defenses

As stated in Chapter 2 “The Legal System in the United States”, a criminal defendant will be acquitted if the prosecution cannot prove every element of the offense beyond a reasonable doubt. In certain cases, the defendant can either deny that a criminal element(s) exists or simply sit back and wait for the prosecution to fail in meeting its burden of proof. This legal strategy is sometimes referred to as either a denial or failure of proof defense.

Example of an Affirmative Defense

A fight breaks out at a party, and Juan is severely injured. Jasmine and Jerome are arrested and charged for battering Juan. Jerome claims that he did not touch Juan; someone else battered him. Jasmine claims that she did not batter Juan because she was legally defending herself against Juan’s attack. Jerome’s claim focuses on the elements of battery and asserts that these elements cannot be proven beyond a reasonable doubt. Technically, Jerome can do nothing and be acquitted if the prosecution fails to prove that he was the criminal actor. Jasmine’s self-defense claim is an affirmative defense. Jasmine must do something to be acquitted: she must prove that Juan attacked her to a certain evidentiary standard. 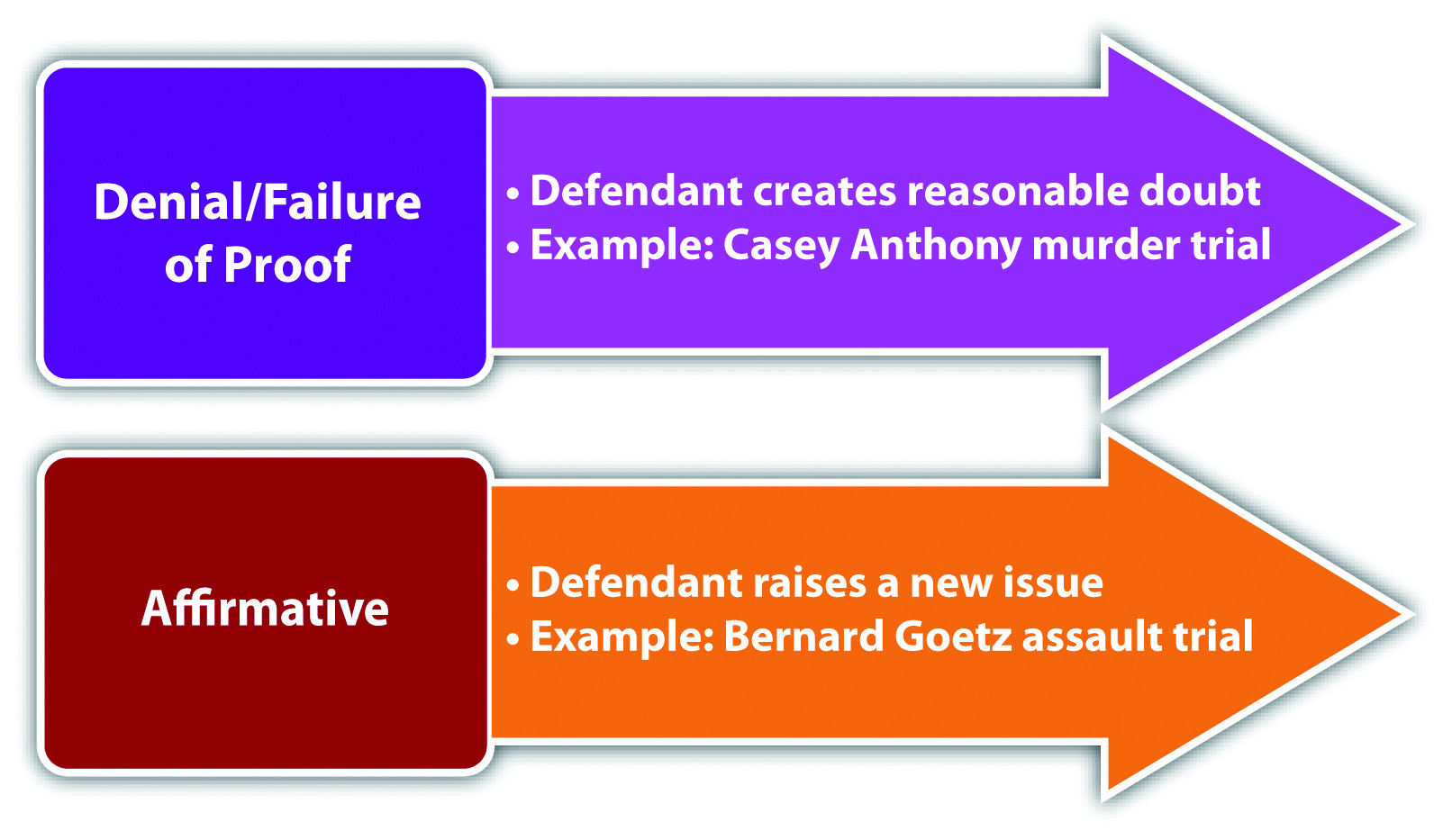 Burden of Proof for Affirmative Defenses 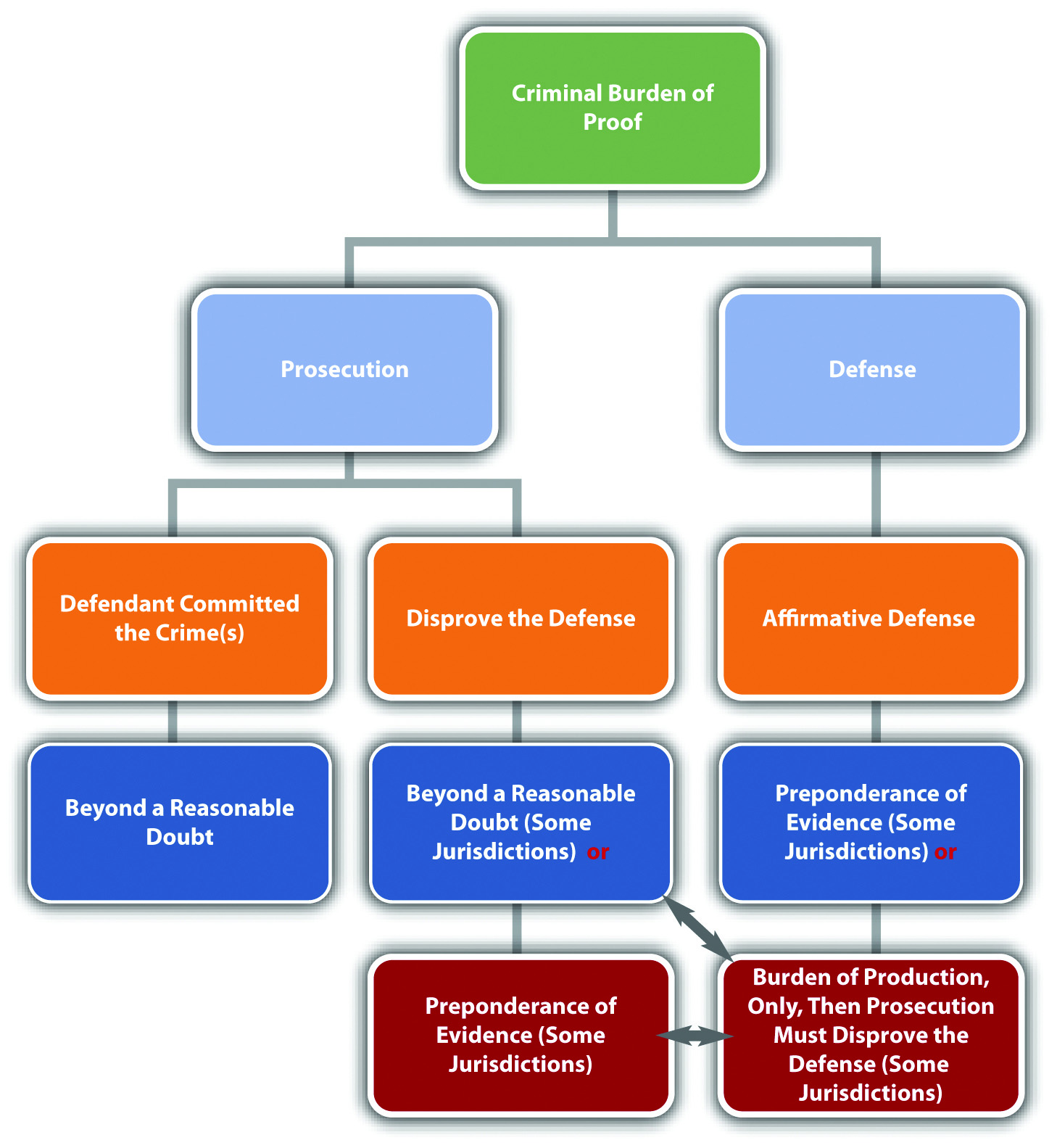 Figure 5.2 Diagram of the Criminal Burden of Proof

Definition of Imperfect and Perfect Defenses

Example of Imperfect and Perfect Defenses

LuLu flies into a rage and kills her sister Lola after she catches Lola sleeping with her fiancé. LuLu is thereafter charged with first-degree murder. LuLu decides to pursue two defenses. First, LuLu claims that the killing should be manslaughter rather than first-degree murder because she honestly but unreasonably believed Lola was going to attack her, so she thought she was acting in self-defense. Second, LuLu claims she was insane at the time the killing occurred. The claim of manslaughter is an imperfect defense that will reduce LuLu’s sentence, but will not acquit her of criminal homicide. The claim of insanity is a perfect defense that will result in an acquittal.

Definition of Factual and Legal Defenses

Example of Factual and Legal Defenses

Armando is charged with the burglary of Roman’s residence. Armando decides to pursue two defenses. First, Armando claims that he was with Phil on the date and time of the burglary. This is called an alibi defense. Second, Armando claims that it is too late to prosecute him for burglary because of the expiration of the statute of limitations. Armando’s alibi defense is a factual defense; it is based on the fact that Armando could not have committed the burglary because he was somewhere else at the time it occurred. Armando’s statute of limitations defense is a legal defense because it is based on a statute that limits the amount of time the government has to prosecute Armando for burglary.

Definition of Justification and Excuse

With the exception of alibi, most affirmative defenses are based on either justification or excuse. Typically, justification and excuse defenses admit that the defendant committed the criminal act with the requisite intent, but insist that the conduct should not be criminal.

Example of Justification and Excuse

Review the examples of affirmative, imperfect, and perfect defenses given in Section 5.1.1 “Categorization of Defenses”. Jasmine’s self-defense claim is based on justification. Society believes that individuals should be able to protect themselves from harm, so actions taken in self-defense are justified and noncriminal. Note that a self-defense claim focuses on the offense (battery) in light of the circumstances (to prevent imminent harm). LuLu’s insanity claim is based on excuse. Although LuLu killed Lola with criminal intent, if LuLu is truly insane it is not be fair or just to punish her for her behavior. Note that an insanity claim focuses on the defendant (a legally insane individual) and whether he or she should be criminally responsible for his or her conduct.